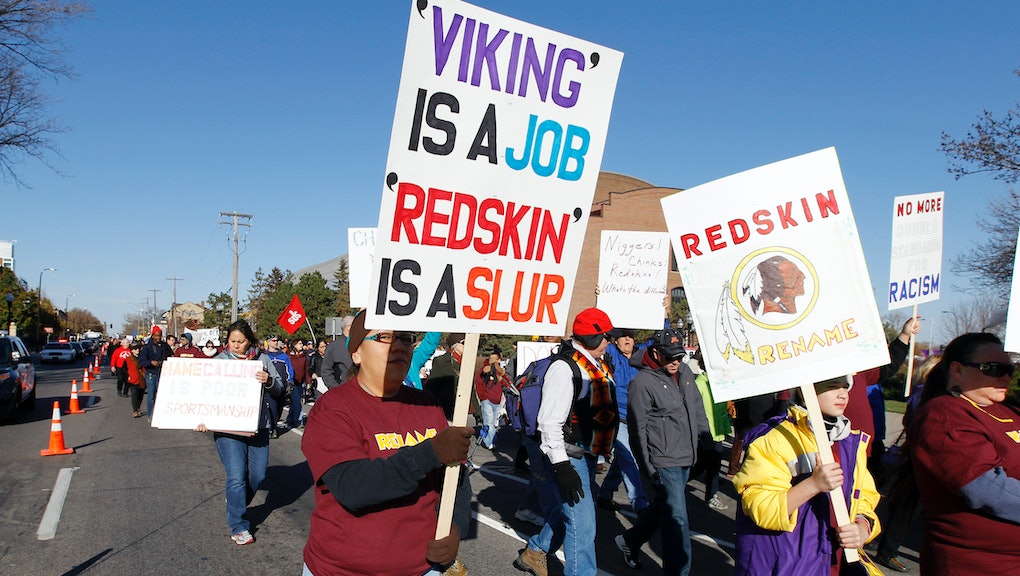 The news: "Change the name."

That was the loud chant heard from thousands of protestors Sunday morning who turned out in force at TCF Bank Stadium, where the Minnesota Vikings were facing off against the Washington Redskins. Activists hoped the boisterous demonstration would resonate with the Redskins, the branding of which many argue is blatantly racist and offensive.

The protest, which was organized by the National Coalition Against Racism in Sports and Media, included speakers from local Native American reservations and Minneapolis Mayor Betsey Hodges. Police said an estimated 3,200 people turned out, the Star-Tribune reports.

Some took to Twitter with the hashtag #NotYourMascot to ensure that their message spread across the world. Social monitoring service Topsy measured around 9,000 tweets with the hashtag made within the past 24 hours.

"I have a message to the Washington team: The clock is ticking on your name ... it is more than an insult," Hodges shouted, according to the Star-Tribune. "It's hate."

Activist Clyde Bellecourt went further and lashed out at Redskins owner Daniel Snyder, who has remained adamant that he's not changing the name.

"He should know a little bit about genocide," Bellecourt said, "the fact that Jewish people are still here today. There have been millions of people erased from the face of the Earth, scalped. Scalped! Their scalps taken to be sold for bounty. The blood running down the children's faces. There were whole tribes that were totally decimated."

Growing opposition. The demonstration, which protestors hoped would be the largest of its kind, is part of a growing trend against the Redskins.

Over the past year, opposition has reached a fever pitch from all sorts of groups, including the courts and President Obama. NPR has even limited the use of the word "Redskins" on its airwaves.

But the change is going to take a while. A recent poll conducted by the Washington Post said only 14% of Redskins fans think they should change the name. Snyder even loudly told a reporter that they'll never change the name. "It's that simple. NEVER — you can use caps," he said.

But judging by the vigor of these protestors, they're not to going to let up anytime soon.