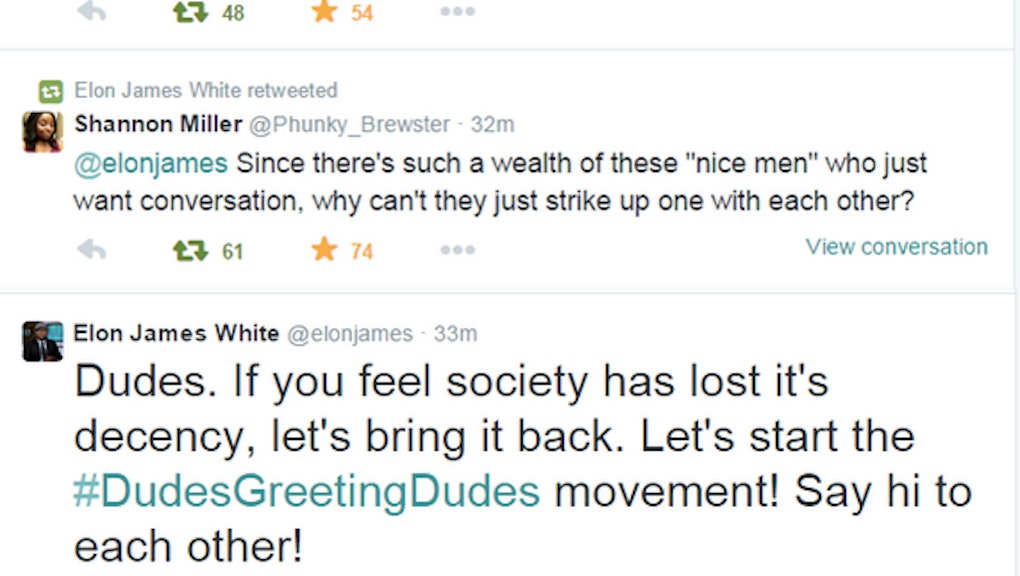 Whenever we have a conversation about street harassment, one side often proclaims that men who holler at women are doing it out of the kindness of their own hearts. If men are truly just trying to be "nice" and "friendly" when they harass women on the street, why do they only target women? If it really isn't about being predatory, entitled and anything remotely sexual, then why aren't straight men striking up these conversations and yelling things at men too? That flawed logic is exactly what Elon James White exposes with clever new hashtag #DudesGreetingDudes.

After a video showing a woman being harassed more than 100 times in the span of 10 hours in New York and a CNN interview with Steve Santagati, a condescending pickup artist mansplaining about why women should be grateful for street harassment both went viral, men in support of street harassment have become a particularly vocal minority online.

Funny that the guys defending their right to shout things at women walking down the street don't feel the urge or need to strike up conversations with other men. Maybe if they spent half their time targeting fellow males with unsolicited "compliments," women would be able to you know, get to places. A few men on Twitter attempted to show what it would look like if men treated other men the way they treat women.

To be clear, this is not about men hitting on men, a subject with deeply-ingrained stigmas of its own. The #DudesGreetingDudes hashtag was designed to highlight why exactly its disingenuous for apologists to argue that a catcall is somehow a normal form of discourse between two strangers, and not a specific form of harassment designed to bolster a gendered power hierarchy.

The point is, if you are a guy defending your right to verbally harass women, it might be a good idea to explore why you feel the need to share every single thought or musing you have about a woman's appearance. What makes you so entitled you believe you have the right to share that information out loud, in public, with her and everyone else around?

Instead of telling women to appreciate men's unsolicited appraisals, maybe we should critically engage with what compels men to make those comments in the first place. If men spent as much time reflecting on their behavior and attitudes towards women as they did harassing them, maybe they'd realize that the only people they're making fools of are themselves.