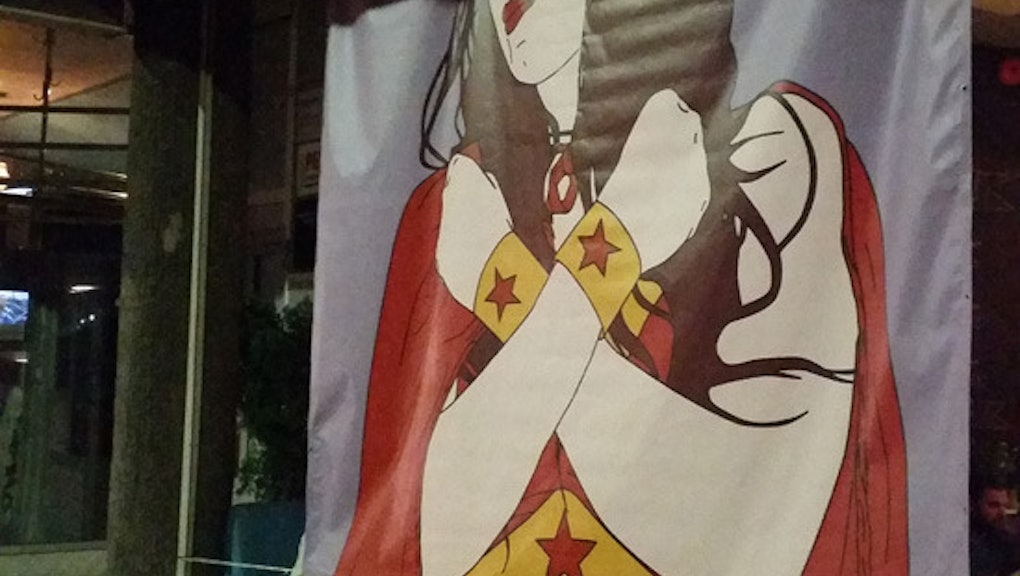 This sponsored post is the ninth story in our "History Begins Here" series — spotlighting young women who are helping set a new course for our generation.

Feminism in art is surging again.

Many female artists, from all over the world, are using their work to highlight women’s changing role in political and social affairs. This new school of artists is exploring diverse mediums, experimenting with how their art is presented and making complicated discussions around women and identity more accessible to the public.

The feminist art movement that began in the 60’s and 70’s is in its next phase. This year alone, we’ve seen women holding the front lines of large-scale political revolutions and earning a record numbers of seats in political bodies. The art that’s emerging seeks to reflect this wave and firmly establish the belief that women will shape the future.

Superwoman is part of a portrait series called Women Working for Women. These outsized portraits, printed on tarps and placed in public settings, focus on woman as catalysts of change.

“I consider myself a feminist artist,” Acha-Kutscher told Mic. “My work plays a dual role: being an artistic product and also an instrument that contributes to political transformations.”

Acha-Kutscher forces a public discussion with her work. In 2014, it lined the streets of Spain, Mexico and Bosnia-Herzegovina.

Said Acha-Kutscher: “The images I produce are the result of a constant investigation on woman, her history and the struggles for emancipation and equality.”

Another of Acha-Kutscher’s portraits, We Can Do It!, shows a pierced, punk woman wearing an iconic “We Can Do It!” t-shirt. The slogan was originally intended to encourage workers during World War II and was later co-opted as a feminist slogan. Here, it’s brought into the modern world.

Anne Sherwood Pundyk is a New York City-based artist who uses abstract paintings to make powerful statements about women in the world.

As an artist, Pundyk sets out to encourage others to “take risks, get up if you fall, and trust your instincts.” Shadow Realm is one of the paintings in her series The Revolution Will Be Painted. Recently on view at Gallery Sensei on New York’s Lower East Side, it shows Pundyk’s unique visual interpretation of a heroine protecting her child’s inner being from the precarious outside world. It defines the woman as defender and fighter.

For Pundyk, painting has liberating powers that can free up deeply rooted ideas about the female experience.

“Women have largely been excluded from the canon of painting,” Pundyk writes. “Rather than abandon it, and reinforce this bias, I choose to engage with the medium; there is much that has yet to be said.”

Katrina Majkut’s work spans mediums to comment on feminism and its place in our language and society.

Proud to be a Feminist paints a very literal image of the way we can reverse the negative connotations of the word. With a playful tone, it invites viewers to consider how we can encourage young girls (and others) to incorporate the word into their vocabulary and identity.

In another piece, In Control 1, 2 and 3, Majkut uses cross stitching, a stereotypically feminine pastime, embroidery, to make a statement about female reproductive health — specifically, that it’s best left up to women.

The overarching theme in all her pieces is that art is a continuum of social progress. The act of creation is an evolving process helping us to build new meaning and context to the way we form our identity.

Cheryl Braganza, a Montreal-based artist, uses her work to confront the fact that around the world many are conditioned to think of women as weaker than men.

Throughout all her work, Braganza strikes an uplifting tone of empowerment through solidarity.

“Intrinsically, [all our] concerns are the same,” she said. “I truly believe that women will be the changing force towards a more peaceful world.”