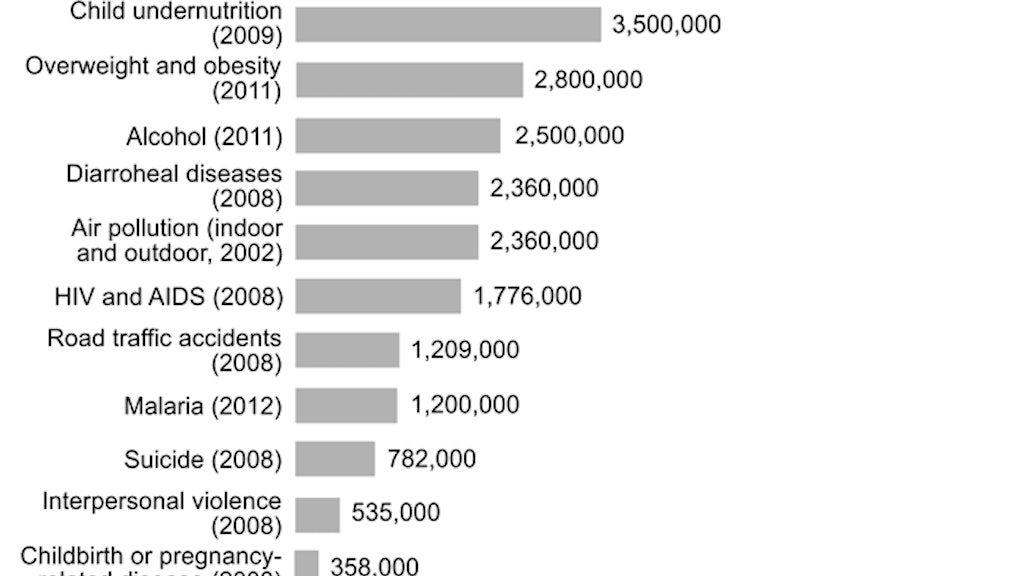 One Chart Shows Our How Irrational Our Fear of Terrorism Is

Is terrorism the biggest threat to human civilization? No, not at all.

That's according to data on the global death toll by cause of death, published in 2013 by Oxfam and republished recently by Oxford University researcher Max Roser on Our World In Data:

In fact, terrorism isn't even close to the top cause of death around the world. Child mortality, tobacco, child undernutrition, obesity and alcohol all kill far more people each year. Despite the fact that child mortality is currently at its lowest level in decades, there's still a long road ahead for addressing it worldwide. Between 1990 and 2013, 223 million children across the globe died before turning 5, which comes to around 17,000 preventable deaths every day.

But Americans don't think that way. As of 2013, people thought more frequently about the possibility of a terror attack in the United States than they did about the prospect of their own hospitalization. We might chalk this up to the fact that the Western media is somewhat fixated on the threat of Islamic terrorism, despite there being greater treats to national security just over our borders.

It's not just terrorism. "Ebolanoia" over the recent Ebola diagnoses in Dallas and New York has led to gross overreactions from average Americans, from wearing homemade hazmat suits to pulling kids from school, over a disease that's incredibly hard to contract and U.S. health officials are well prepared to treat. Dr. David Seres argues that the media is to blame here, as "from the outset, news outlets, politicians and pundits have been spreading Ebolanoia in service of their own agendas, stirring up mistrust of the government and unwarranted fear, with pseudoscience and outright falsehoods."

But this irrational fear extends far beyond exotic threats like terrorism and disease. A recent study from Chapman University found that even though crime rates have decreased over the past 20 years, most Americans think all types of crime have become more prevalent.

So do we live in a nation of panicky whiners? Not at all. Irrational fears are a natural feature of human psychology, not some symptom of a weak and cowardly culture. As the Atlantic's Olga Khazan recently wrote, "fear of things that might actually hurt us, like the flu or smoking, is understandable and healthy. It's the phobia of things—snakes, sharks, the youth—that pose virtually no threat at all that's more puzzling."

An inability to process these kinds of odds ratios is one reason why some people experience irrational, sometimes crippling, unease. In an interview with New York magazine about why Ebola is sparking mass hypochondria in the U.S., Catherine Belling, an associate professor at Northwestern University's Feinberg School of Medicine, chalked it up to a reasonable fear (you might get Ebola if you accidentally touch the bodily fluids of someone who has it) getting distorted by bad logic (you might get Ebola if you accidentally touch anyone, ever.)"What hypochondria is, then, is the inability to put that very rational fear into context, where you can continue to function normally rather than being paralyzed by it," she said. "When someone who is in, for example, New York, won't leave their apartment because they're afraid of getting Ebola. They're incapable of recognizing that there's truly an incredibly minuscule likelihood of getting Ebola."...We feel more imperiled when we feel physically vulnerable. People who think they are in poor health, regardless of whether they actually are, also feel like they are more likely to be victimized by criminals. The fear-mongering around Ebola on cable news is especially damaging because anxiety tends to breed more anxiety: The threat of contamination can lead to "mass psychogenic illness" in which people avoid things like gluten, vaccines, or windmills, simply because others do.

So next time you see a blaring terrorism-warning message on CNN, Fox or MSNBC and feel your anxiety start to rise, take a deep breath and chill out. Your irrational fears are perfectly natural — but that Doritos-flavored Mountain Dew is more likely to kill you than terrorists are.