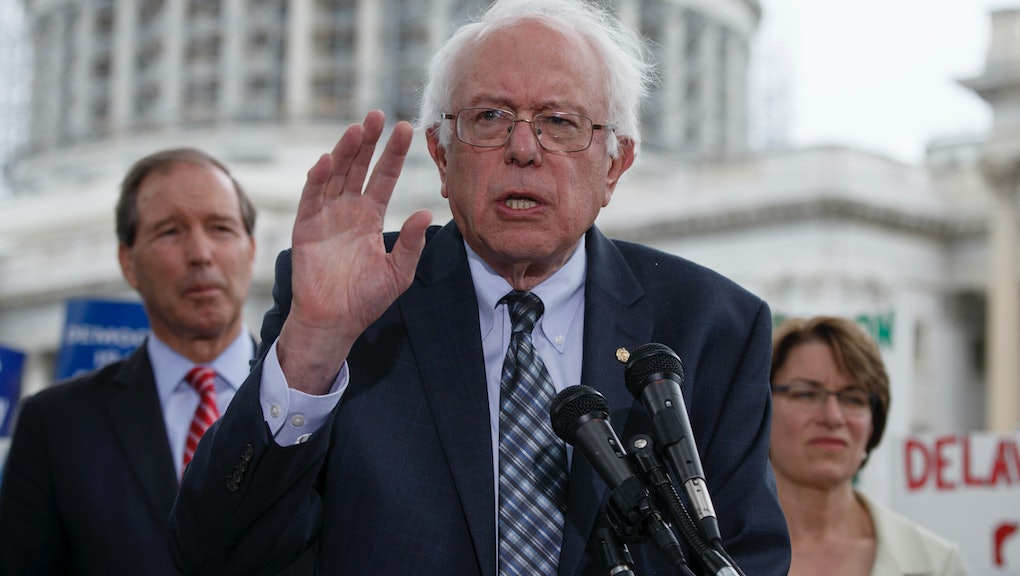 Republicans are in flux. Hillary Clinton is in a holding pattern.

This is the prevailing storyline — the reality, for now — going into the 2016 campaign, two years ahead of Election Day.

And it's a huge problem. Presidential elections are always going to cater to our taste for narrative drama, but the coming debate needs to be about something more.

It needs a voice that will challenge, on the merits, Clinton's run for the Democratic nomination — a contestant who is able to frame the deeply troubling issues of the day, from economic inequality to climate change, in a way that elevates them above a given day's political soap opera.

There is one person who can do it. He is Sen. Bernie Sanders, independent from Vermont.

The only self-proclaimed socialist in Congress, Sanders was elected to the Senate in 2006 and re-elected in 2012. He is a registered independent, but votes with the Democrats on nearly everything. He's best known outside of Washington, D.C., for his marathon 2010 filibuster against a tax-cut deal between President Barack Obama and Republicans.

Now the man with the slapdash shock of white hair and captivating ideas about how to fight growing economic inequality is winning the hearts and stirring the minds of a lot of disillusioned progressive voters.

Speaking to journalist Bill Moyers at the end of October, he laid out his core rationale for a potential presidential run:

"Things are getting worse.You know, when you look at this campaign, and you realize the enormously serious issues this country faces, right, we got a collapsing middle class. We have more wealth and income inequality today than we've had since the 1920s. We have all of these enormous issues. And what big money can do is put an unbelievable amount of TV and radio ads out there to deflect attention from the real issues facing the American people."

Why he should run: Sanders is one of the last true progressives. He supports Obamacare but goes even further, advocating for a single-payer system which would cut out the private insurance middlemen and offer full access to medical care. He also wants to protect and, in some cases, expand social safety programs like Medicare and Social Security.

Regarding higher education, Sanders says college should be free. Trade policies, he argues, should be formulated to protect American workers from the effects of globalization. And Citizens United, the Supreme Court decision that took the reins off outside political spending, should be overturned or defeated by a bill passed in Congress and signed into law by the president.

He would pay for it all by raising estate taxes on millionaires and billionaires.

The issues important to Sanders, specific to this particular moment, include a corporate class that is not only getting richer but tightening their death grip on the levers of our democracy by deregulating spending on campaigns and executing a coordinated plan to disenfranchise the poor and minorities with discriminatory voter ID laws.

"You have to bring people together who may not agree on every issue, but who understand that the middle class is collapsing and we are moving toward an oligarchic form of society, where the billionaires will control the economy and the political life of this country," Sanders told Moyers.

He would keep Clinton honest: Right now, there is no credible obstacle on Clinton's path to the nomination. Cautious by nature, she needs a challenger with sharp ideas and enough popular support to strike some fear into her campaign — someone to keep her true to her progressive words. With the possible exception of Sen. Elizabeth Warren (D-Mass.), Sanders is the only candidate who can pressure Clinton from the left.

Without Sanders in the mix, the issues important to progressives will likely fade into the background. There will be no demand for Clinton to put forward a serious, substantive plan on dealing with income inequality or the influence of big money on elections. Sanders sitting out would, in effect, silence the millions of Americans who want these issues on the table.

He's the candidate the Democrats need: Sanders should gather up his considerable will, cash-in his good standing with liberals in and outside the party and announce he will compete in the Democratic primary campaign. The other option, a third-party run as an independent, might do more to build a personal brand but its potential for influencing the shape of the 2016 campaign in a positive way is considerably smaller.

Without access to the debates and the eyeballs they attract, there is no way Sanders can get his name and his argument into the public sphere. He doesn't have the money and, no matter how much grassroots support he musters, his bankroll will always be a fraction of the corporate cash backing Clinton and other party favorites.

An important voice: But if Sanders is there, on the stage and in the arena, everyone alongside him will be forced to confront the serious question underlying the most dire threats to the republic. There is no partisan divide, at least among voters, over the roll of money in politics. Republicans and Democrats, from the tea party to Occupy activists, believe the government has become too beholden to wealthy interests. Nine out of 10 want it out.

The two sides might explain the issue differently and offer varying ways to fix it, but they are in agreement that it is a problem that needs to be addressed. Candidate Sanders will not let his opponents forget this. He will not let Americans forget it. He is a bug in the ear of the powers that want to turn your head or keep young voters in bed on Election Day.

He is one of last few public figures who can — either by winning or changing the course of the debate — help author a worthy ending to what Thomas Jefferson called the "great experiment" of American democracy.