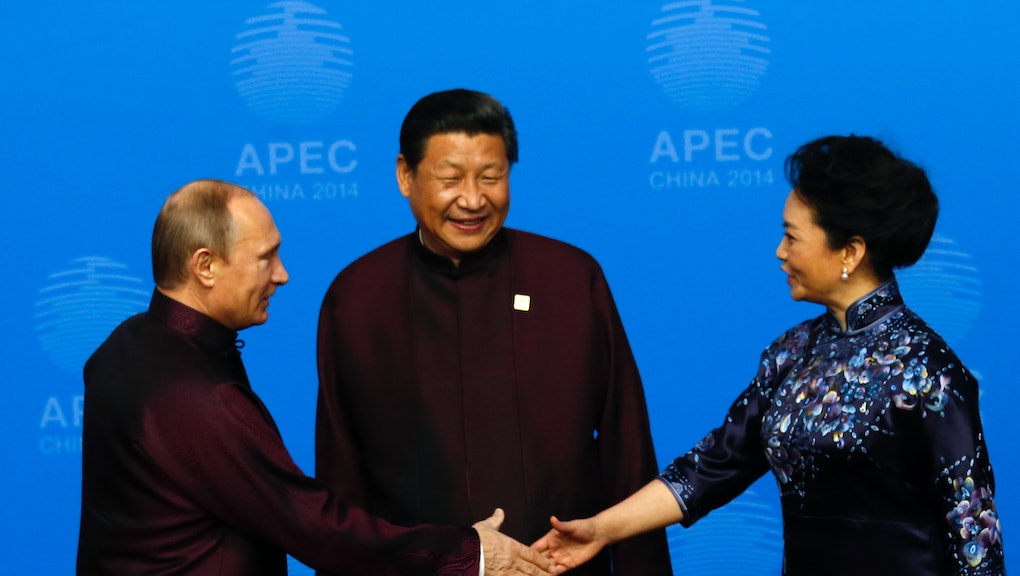 Is Vladimir Putin Hitting on China's First Lady in this Video?

The news: When you think of Vladimir Putin, chivalry isn't the first (or even last) adjective that pops into mind. But at Monday night's Asia-Pacific Economic Cooperation (APEC) meeting in Beijing, the Russian president inadvertently showed the world there's a Mr. Nice Guy side under his strapping muscles and icy demeanor.

At the opening dinner attended by basically every political leader on the planet, video shows China's President Xi Jinping talking with President Obama, while to his left, Xi's wife, Peng Liyuan, exchanges niceties with Putin.  At the 0:45-second mark, the newly divorced Putin stands ups and drapes his tan cashmere jacket over Peng's shoulders in a move that made Chinese censors queasy. Take a look:

Likely realizing that sitting with another man's jacket wrapped around her wasn't the most politic move, Peng wore it for a few seconds before passing it off to one of Putin's handlers and putting on another.

The fun quickly turned into a party foul as China's Internet censors leaped in to scrub the hashtags from social media and the video was pulled from the state-run media outlets' websites, Foreign Policy notes. "The first unspoken rule of diplomacy might be 'Don't hit on the president's wife,'" quips Bethany Allen-Ebrahimian. "But Russia's newly single president Vladimir Putin seems to have missed the memo."

Why it matters: From arresting protestors to temporarily closing factories so the air isn't polluted, China is tightly controlling all aspects of the APEC conference as the world looks on. Something like this doesn't fit China's squeaky clean projected image.

"China's tightly controlled state media carefully protects the reputation of its top government leaders, and the names of China's top leaders are frequently some of the most heavily censored terms on Chinese social media," Allen-Ebrahimian writes. "In addition, the sweeping anti-corruption campaign Xi himself directs specifically targets infidelity as both a sign and a symptom of graft."

Unfortunately, the best way to draw attention to something is attempt to hide it (just ask Barbara Streisand), and the efforts of censors to scrub the video have only attracted more snickers and intrigue from observers in China and abroad.