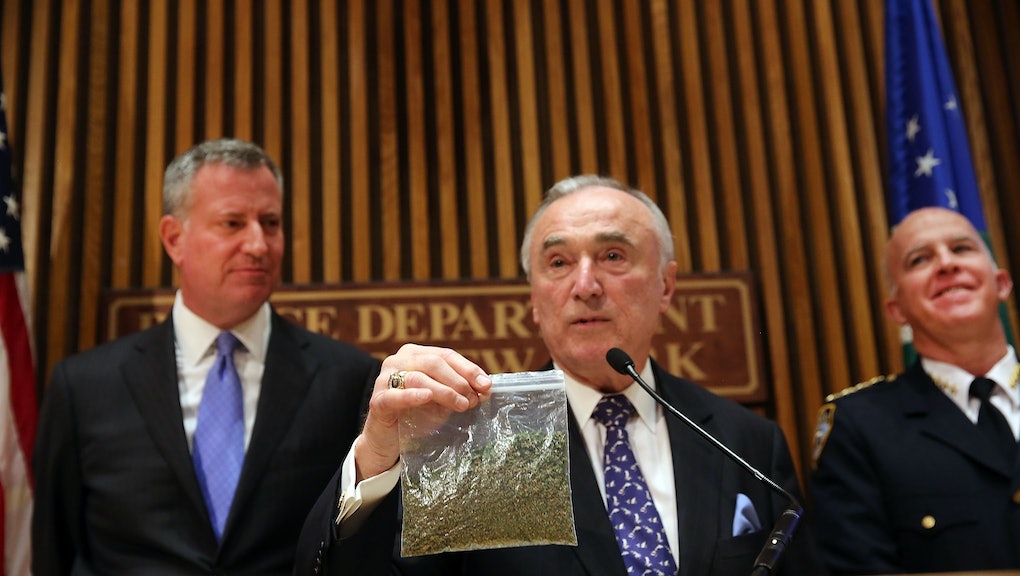 The news: New York City announced sweeping changes to its marijuana laws Monday, and this unusual photo shows why this is bigger than just New York.

Just kidding, that's not weed — it's oregano. Regardless, Bratton is holding up what would be about $300 in weed to "give you a sense of what 25 grams of marijuana would look like," he said, adding that the smell was giving him the case of the munchies.

"All I can think of right now is pizza, because I usually like oregano on my pizza," he joked.

Why it matters. The symbolism of Bratton handling a giant bag of stunt pot is undeniable. Bratton, who's on his second stint as NYPD commissioner, previously served as the commissioner of the Boston City Police and chief of the Los Angeles Police Department, and his style of "zero tolerance" policing may have helped bring petty and violent crime rates down in Boston, New York and Los Angeles. Bratton is the face of the "broken windows" theory of policing that underlies the criminalization of marijuana possession.

In September, Philadelphia became the largest city to fully decriminalize marijuana. People who possess an ounce of marijuana (about 30 grams) get slapped with a $25 fine. That's a large drop from the city's previous $200 fine, in place since June 2010. Councilman Jim Kenney, who introduced the law, previously told Mic that possessing small amounts of weed shouldn't be a law-breaking offense.

"Keeping it out of the criminal courts and keeping it a civil offense is groundbreaking in Philadelphia," Kenney said. "An arrest record for possession under an ounce results in a criminal record, which makes getting a job virtually impossible and basically makes receiving college aid or serving in the military out of the question."

During last week's midterm elections, several other states and cities eased up on marijuana penalties. In Washington, D.C., people older than 21 years old can possess up to 2 ounces and can grow up to six plants without being busted by the police. On a state level, Oregon and Alaska approved pot for recreational use.

Ultimately, the tide is turning in favor of full legalization of weed across the country. People, especially younger demographics, increasingly support legalization and say they wouldn't be bothered if people freely smoked weed.