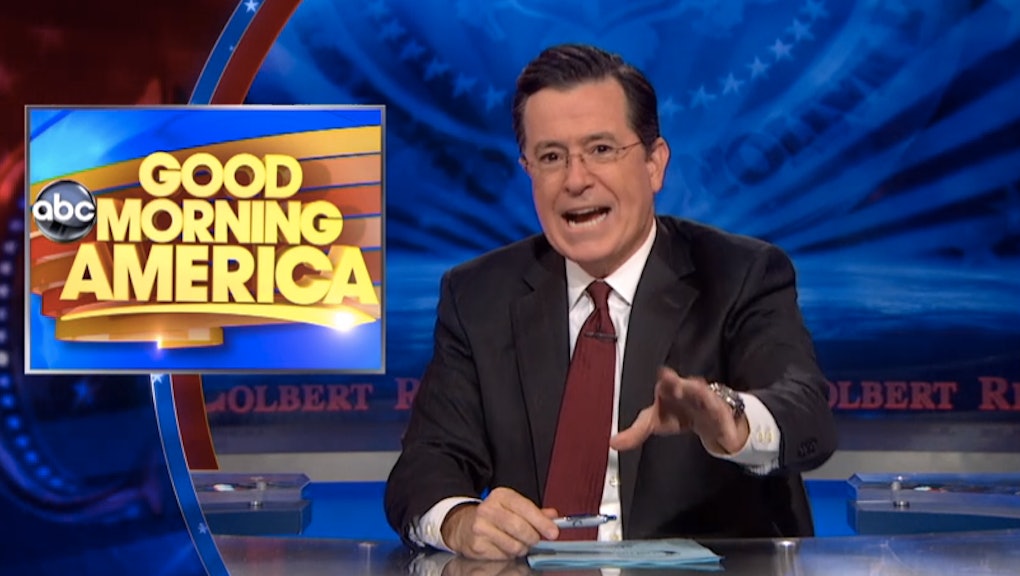 Between showing videos of tiny hamster dinners and prostate exams, it's difficult to find any news on network morning shows.

And since we're in the midst of the ratings sweeps period, Stephen Colbert has noticed the programs have stepped on the stupidity button extra hard in an attempt to attract viewers. On Monday's Colbert Report, he ripped into the shows for their "cheap publicity stunts" before taking aim at tabloid-prone ABC's Good Morning America, which barely passes as "news" anymore.

"But when it comes to blowing it out for ratings, no one blows harder than Good Morning America," Colbert said, before launching into a five-minute takedown of GMA's "Survival Week."

It's a numbingly silly segment that puts reporter, er, "actual news guy" Matt Gutman into unlikely situations, such as surviving shark and bear attacks or a plane crash.

"That is news you can use," Colbert said. "Now I know what to do if the plane I'm on crashes into shark-infested waters and the pilot is a grizz!"

GMA treats the segment with the utmost seriousness one expects from a morning show, as Gutman is shown tackling a bear. But Colbert notices that it comes undone when the show admits these things will never happen to you.

"These GMA tips are absolutely critical to survive an attack that GMA just as critically admits will never happen," Colbert said. (You're more than 250 times more likely to die from a lightning strike than a bear attack.)

And then, in true Colbert fashion, he tries to topple the No. 1 morning show by offering a sweeps-week stunt of his own. He brought in a bucket, which is statistically more likely to injure you than a shark or bear. Want to know how to escape? You'll have to watch.