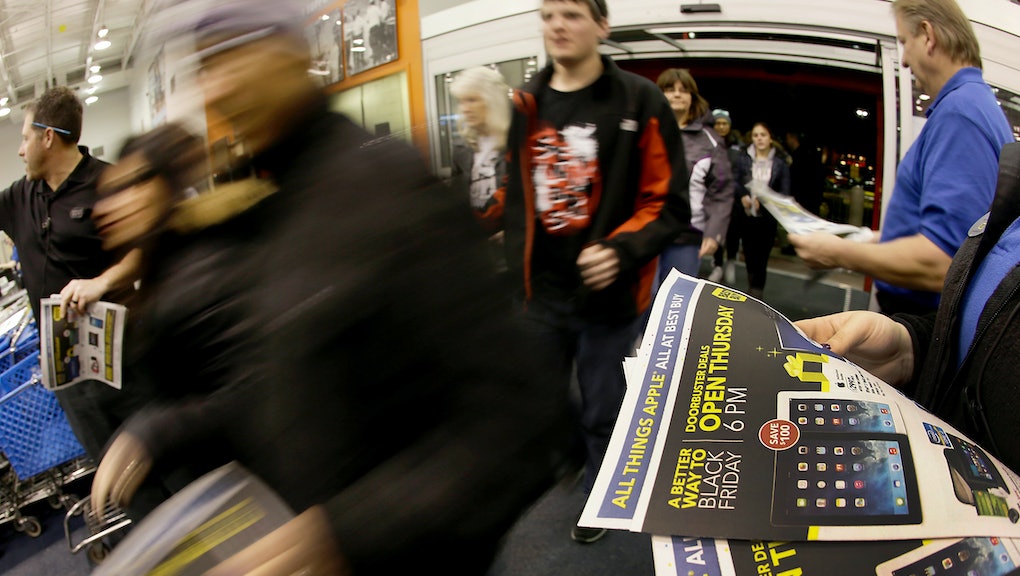 Most Americans Will Be in the Same Place on Black Friday

While viral videos of sale-hungry mobs swarming the Best Buys and Wal-Marts might make it seem like everyone and their mother is celebrating the unofficial first day of the holiday shopping season, a Bankrate poll shows they're in the minority.

What about Cyber Monday? Only 28% of Americans polled said they plan to shop on Black Friday, and despite the lack of crowds and not having to worry about parking, even fewer people (25%) said they're not bothering with Cyber Monday, either.

The survey also found that 54% of young people between the ages of 18 to 29 years old are likely to brave Black Friday — a trend that's credited toward the age group being smart with their money.

"That generation is much smarter ... in terms of their purchasing power," retail analyst Pam Quintiliano told Bankrate. "They're very savvy about how to research to get the most bang for your buck."

Why are shoppers avoiding Black Friday? For years, retailers have trained consumers that Black Friday is filled with blockbuster deals they won't find at any other time of the year.

A scan of BlackFriday.com, a website that collects Black Friday circulars, shows retailers' splashy phrases like "Our biggest one-day sale" or "Biggest sale of the year!" But it doesn't matter how big or colorful the font is because shoppers are not buying into the hype.

According to data obtained by the Wall Street Journal, "retailers' biggest price cuts last year came on the Monday before Thanksgiving, and shoppers who bought items on Thanksgiving Day snapped up the season's lowest prices."

"People have grown accustomed to the fact that this is the big holiday shopping weekend, but you can still get deals the week leading up to Christmas," Jeanine Skowronski, a Bankrate analyst, told the International Business Times. "So consumers have options and they're going to shop when it's convenient for them."

But the day itself isn't going away anytime soon since — those dedicated hordes may be smaller than in years previous, but this Black Friday is still forecasted to be the busiest shopping day of the year. The smart shoppers, however, will be staying home for some weepy holiday brain candy.