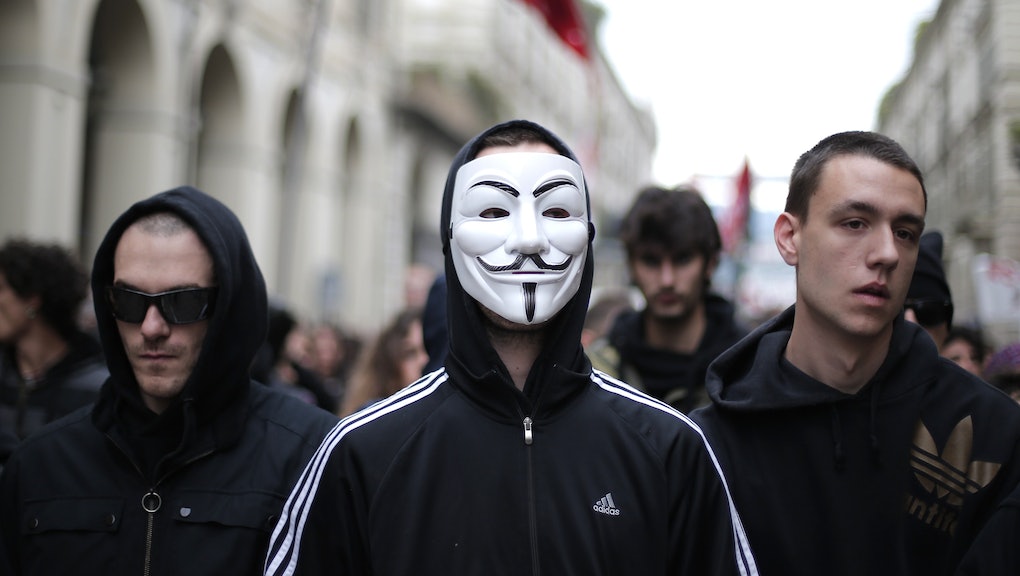 Does Anonymous Do More Harm Than Good?

Watching the notorious hacker network Anonymous swarm a widely hated foe is one of the most exhilarating spectacles the Internet offers.

The slickness and speed of their attacks can take on a cinematic quality as they coast the Web, masked and gleeful, disabling and making a mockery of white supremacists' ambitions in Ferguson, Missouri, exposing child pornographers or striking the Tunisian government's web presence to inject extra life into the Arab Spring. Anonymous' promise of a free-wheeling revolution brought about one hack or prank at a time is seductive and appears to represent a new mode of action for political change.

But Anonymous has problems — lots of them. As Adrian Chen discusses in the Nation, the iconic hacktivist collective has an enormous set of flaws and missteps that should define its reputation at least as much as its potential to advance progressive causes.

Their history of harassing minorities and women and embracing an organizational structure that glorifies the Internet without acknowledging its many shortcomings warrant serious scrutiny. Their problems in these realms offer vital lessons for other progressive movements of our era that share some qualities with them, most obviously the failed Occupy movement.

White masks, white faces: Bullying marginalized people is embedded in Anonymous' DNA. As Chen describes, Anonymous came into being in 2003 through the online messaging board 4chan, mostly for the purpose of trolling and harassment. During one of their raids, several members invaded an online game for teenagers called "Habbo Hotel" only to hurl out racial slurs and use their characters to produce a swastika.

Whitney Phillips, a digital culture scholar, found that 4chan's trolls were overwhelmingly male and white, and a majority of their hijinks targeted people of color, women and homosexuals. They once harassed an 11-year-old girl into police protection after she made a video they disliked. The group established a reputation for ganging up on hapless Internet users and used "Internet Hate Machine" as a moniker.

Anonymous has evolved since, focusing on anti-authoritarian, left-leaning causes. But the sociodemographic tendencies of the group — white, male, likely to spend a lot of time alone — explain issues like their appropriation of an influential black feminist's agenda to organize silent protests on behalf of Ferguson this summer.

In August, Anonymous put out a video calling for a "National Day of Rage" at the exact time, day and location that Feminista Jones had called for a "National Moment of Silence," Chen reports. Naturally, Anonymous's action took the limelight, and they managed to override the very political actors for whom the cause is most important.

When is a mob not a mob? Anonymous' amoebic nature is both a gift and a curse. It's an unruly band of mischief makers with no formal methods for claiming unity or endorsement of any of its self-proclaimed members' actions. To the extent that any participant or supporter takes to the streets for a protest that Anonymous decides to get involved in, they traditionally don Guy Fawkes' masks, maintaining their anonymity.

But the very qualities that empower them online and in one-off protests are precisely what hamstring their political effectiveness. The decentralized arrangement of power within the group means that it cannot claim an official agenda or position on any matter, and as a result, their political attention span is hyperactive and fleeting. Even though Anonymous seems to have improved its politics over time and in recent years has chosen the right side of political battles, they often lack the sustained focus and knowledge required to make an impact that goes beyond ephemeral awareness-raising.

Anonymous' list of hacks and tricks is impressive, but despite their immense power in the world's most powerful medium, it's exceedingly difficult to conjure up a list of the group's concrete accomplishments.

What can we learn from this? Anonymous resembles a political movement that once was a great source of hope for people looking for ways to circumvent traditional ways of effecting social change: Occupy Wall Street.

At one point, Occupy was a banner and style of protest that set over 700 cities around the world alight. But just a year after it began it had already largely faded from the political conversation, save a few initiatives and some rhetorical devices. The reasons for its rapid disintegration are many, but a large part of it can be explained in the same way that Anonymous' shortcomings can be — a totally decentralized network of people who were well-intentioned but lacked the discipline to build a durable organization or agenda (who also, from time to time, garnered criticism for racial, sexual, and class-based prejudice at encampments).

There is something heroic about these bursts of activity from people who seek change without any desire for credit. But movements that claim to be leaderless are, at best, ineffective when executing actions over a longer period of time, and, at worst, a source of reckless and oppressive behavior that they can't ever be held responsible for. It's time to dig deeper.