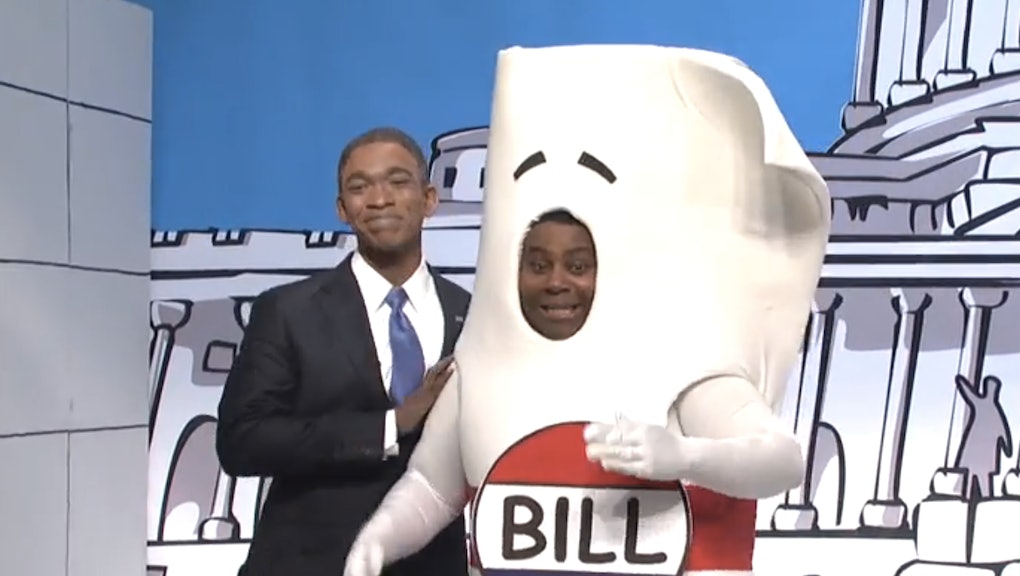 On Thursday, the president announced he's taking executive action that will protect up to 5 million people living illegally in the United States from being deported. It's a relatively complicated plan designed to bring millions of people "out of the shadows," and SNL attempted to break down that complicated issue in the most appropriate way imaginable — a Schoolhouse Rock! song.

Kenan Thompson, dressed up as a "Bill," explains how he usually passes through Congress. But with the House (and, after the midterms, Senate) under Republican control, it's unlikely that Obama's bill would pass. So, Jay Pharaoh, playing the president, pushes Thompson down the Capitol's steps since that bill is not going to happen under the GOP's purview.

"There's actually an even easier way to get things done around here, and it's called an executive order," Pharaoh says. That's when Bobby Moynihan, playing the Executive Order and holding a cigarette, swoops in and explains that "[he] pretty much just happens" without the need of approval from Congress.

The Bill warily climbs back up the stairs and tells Obama, "Look at the midterm elections. People clearly don't want this."

The skit jabs on the constitutionality of issuing an executive order. "Of course, presidents issue executive orders all the time," Obama exclaims. Moynihan, as the Executive Order, chimes in with some less controversial things they're used for (national parks, highways, etc.) with Pharaoh's Obama adding "or bring legal status to 5 million undocumented immigrants."

"Wait, what?!" the Executive Order chirps. "Well, I didn't have time to read myself. Whoa!"

Was it accurate? Sort of, the Washington Post explains. Obama didn't sign an executive order, as the skit says. Rather, he's taking executive action by ordering the Department of Homeland Security to "expand programs that defer deportation for classes of undocumented immigrants."

But the skit is right on two things: It perfectly explained the difference between a law and an executive order, and it reminds us that since many Americans support an overhaul on our immigration laws, it shouldn't necessarily be done using executive power.

Still, SNL gets to the nuts and bolts of Obama's decision and reinforces the idea that comedy is usually the best explainer.