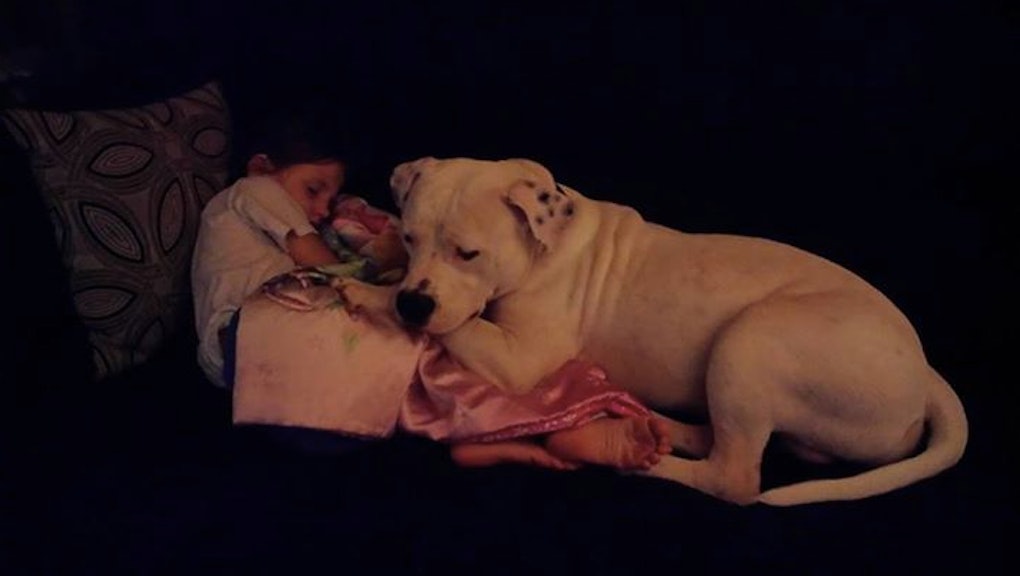 A Louisiana Town Wants to Kill This Young Girl's Dog

The news: A small Louisiana town is about to ruin a young girl's life.

Moreauville, a village located roughly 80 miles northwest of Baton Rouge, is banning its residents from owning pit bulls and rottweilers because of complaints about alleged attacks from the breeds. The ordinance, which takes effect Dec. 1, also bars families from continuing to own the dogs.

That's terrible news for O'Hara Owens, a young girl who suffers from severe neck problems, is forced to wear a neck brace and use a wheel chair and owns a pit bull named Zeus. Owens described Zeus as something of a "therapy dog" to KALB-TV and said "If anything ever happened to [Zeus], I would just shut down."

But that's where the new Moreauville city ordinance comes into play. Unless the family gets rid of the dog, the town said in a letter that Zeus would be taken away for "further disposition." Now, O'Hara and her family are in a fight for the dog's life, telling the local NBC/CBS affiliate that the dog isn't violent and doesn't deserve this inhumane treatment.

"I can sit here if I'm in pain, he comes and he notices it before I even make any noise," she said about the docile dog.

An uphill battle. Sadly, no matter how cute or friendly the dog is, Moreauville town officials called the breed "vicious" — a label the young girl takes issue with. "The breed is not vicious," she exclaimed, adding that no one has complained about Zeus or his behavior.

Her parents tried to overturn the ordinance, but were outnumbered by neighbors who complained the dogs "were basically running along town," Alderman Penn Lemoine told the station. But when pressed about the number of dog attacks, Lemoine admitted that he doesn't think they're documented.

A campaign has started on social media to save Zeus' life. A Facebook page dedicated to overturning the ordinance has garnered more than 17,000 likes while a petition on MoveOn.org has collected nearly 100,000 signatures. Lemoine said, depending on the public outcry, they might change the law at its next meeting.

Dangerous breeds? Unfortunately, pit bulls and rottweilers have garnered dangerous reputations, and there's scientific support for that idea too. According to a five-year review of dog bite injuries, almost "51% of the attacks were from pit bulls, almost 9% were from rottweilers and 6% were from mixes of those two breeds," according to Live Science. So there is something to the idea that certain breeds may be more "dangerous" than others — however, nothing is absolute.

And Moreauville isn't the first town to pass a ban on the dogs. There are about 700 cities nationwide that prohibit pit bulls and similar breeds because they're considered a danger to the public.

But the issue shouldn't be solved like this. While these breeds might be more conducive to violence, the responsibility ultimately lies with irresponsible owners who are training the dogs to be vicious. Furthermore, assuming that every dog of a certain breed is prima facie dangerous is unreasonable and disregards the responsible owners and their ability to train the dog properly.

The fact of the matter is that dogs don't have to act a certain way because it's expected from their breed. Although Moreauville might have a problem with pit bulls running amok (albeit a shoddily recorded one), this is the very much the wrong way to treat this dog and mentally scar a young girl who has enough hardships in her life.