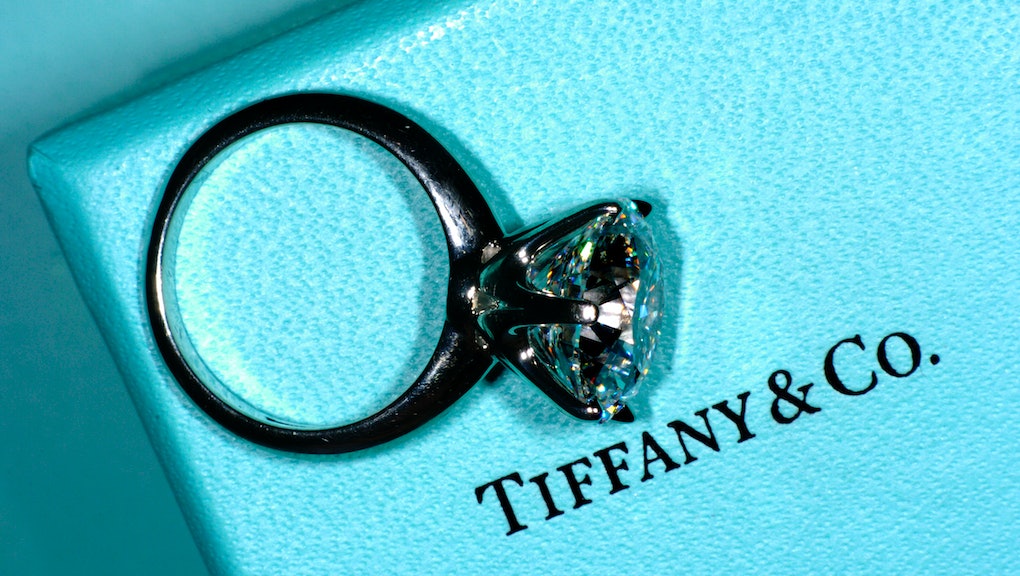 Everything You Were Told About Engagement Rings Is Wrong

Yes, that's a thing, and it starts this week. According to the Associated Press, 40% of engagements take place between Thanksgiving and Valentine's Day, meaning we're about to enter the four-month barrage of Facebook relationship status updates every 20-something knows all too well. And most of these posts will, of course, feature the obligatory ring pic.

Incessant Facebook photos are just one reminder of the importance of engagement bling. One look at Pinterest tells us people place a lot of importance on the rings, maybe more than other aspects of an engagement. In fact, 80% of proposals today include a diamond engagement ring.

While the concept of using an expensive piece of jewelry to commemorate a lifelong commitment is a nice sentiment, there's a lot more to diamond engagement rings than love. In fact, love has basically nothing to do with rings at all.

Here is what this multibillion dollar industry doesn't want you to know about engagement rings.

Expensive engagement rings have been linked to higher divorce rates.

Spending two months' salary (or some other ridiculous sum) on an engagement ring is not only the norm, it's expected. But unless your monthly earnings are less than $1,000, that might not be the best decision, at least according to a study out of Emory University this September.

The study, from Andrew M. Francis and Hugo M. Mialon, surveyed 3,000 heterosexual couples and found that "marriage duration is inversely associated with spending on the engagement ring and wedding ceremony." Specifically, those who had spent $2,000-$4,000 were 30% more likely to get divorced.

And prices will only continue to go up. The average price of a ring is $5,200, according to a 2011 survey. Considering the typical American family makes less than it did in 1989, it's not surprising that spending thousands on a piece of jewelry would put undue stress on a relationship.

So if you've got your heart set on a wallet-busting princess-cut Tiffany sparkler, you may want to rethink that.

There is one universal truth about engagements rings: Traditionally, they are for women. While that may have made sense in a bygone era, in which most women were reliant on male breadwinners, the gender implications that go along with engagement rings are problematic today.

The ceremony of giving a diamond engagement ring is an exhibition in traditional gender roles, namely of ownership and control. The male spends thousands of dollars to show the world that the woman is his.

"It is a symbol that she is no longer a single woman, 'bagged and tagged.' ... Both partners have made this formal commitment, but only he is required to pony up the dough, and only she is required to display her changed status in a public fashion."

The engagement ring is meant to denote possession of a man over a women, at least traditionally. While we may not see it in this sense so much anymore, that only women bear a public sign of their engaged status up until the wedding day is problematic.

We see this dynamic on display all the time. How many times have you been to a bar and noticed a guy checking out that all-important finger? As if he would want to talk to you knowing you already belong to someone else. Films and TV shows depict the engagement ring almost like a deterrent; in New Girl, Daisy wears a ring at bars so she doesn't get hit on, while on Scrubs, Carla felt unattractive because no men would talk to her while wearing her engagement ring. The ring signals a clear "taken" status to men everywhere.

Also problematic is the tradition that men buy the ring in the first place. Never mind the fact that women in their 20s without children — prime candidates for engagement — out-earn their male counterparts. Men are meant to spend thousands of dollars to prove their ability to provide, an expectation that is firmly based on the belief that the male in the relationship should be the provider. Supposedly the bigger the ring, the better he will be at taking care of the family.

Advertisers are the ones who linked diamond rings to engagements.

Much of the expectation surrounding diamond engagement rings comes not from tradition but from the manufacturers of the rings themselves. A diamond may be forever, but that clever saying comes to us from the folks at De Beers.

As a 1982 Atlantic article pointed out, up until the 1870s, diamonds were a rare commodity, but one without intensely high demand — until the discovery of diamond mines in South Africa. Investors in the mines wanted to increase the demand for their product by "perpetuat[ing] the illusion of scarcity of diamonds."  So in the 1940s, De Beers managed to do this with four little words: "A Diamond Is Forever."

The goal was simple:

"We are dealing with a problem in mass psychology. We seek to ... strengthen the tradition of the diamond engagement ring — to make it a psychological necessity capable of competing successfully at the retail level with utility goods and services...."

The slogan and shrewd marketing campaign that accompanied it essentially changed the way Americans (and subsequently much of the rest of the world) courted. Diamonds have since grown into an entire industry, not just centered on engagements. Jewelry companies are now pitching anniversary rings and the right-hand rings for women who just don't want to wait.

There's even been a concerted effort to target same-sex couples in recent years. With the legalization of same-sex marriage has come the rise in a new type of engagement ring. Over 70,000 legal same sex marriages have taken place over the past 10 years, and companies like Tiffany & Co. are helping many of them "embrace of that traditional sense of the engagement," as Jeffrey Bennett, a vice president at Tiffany, put it. Tradition, we've seen, can be whatever the marketers want it to be.

Diamond rings are the epitome of the commodification of everything — even our deepest emotions — in modern society. It's probably no coincidence that diamonds became a girl's best friend once De Beers started their marketing blitz.

You don't need a diamond to get married.

It may seem obvious, but diamond rings are not an essential part of a marriage or even a wedding — an idea that is catching on. Vogue notes that many couples are choosing nontraditional rings with gems like sapphires, a trend jewelers have attested to (and popularized by women like the Duchess of Cambridge).

Then there are brides choosing to eschew jewels entirely in favor of plain gold bands, not to mention brides who get engaged without a ring at all. As the rise of same-sex marriages reminds us, there isn't one way an engagement or wedding has to look.

For those who still want a symbol of their engagement sans the diamond, a few new trends are here to help. Pinterest is chock-full of nontraditional jewels for anyone wanting to shun the diamond.

Of course, some people still want bejeweled rings, just without the sexist connotations. Cue the small but noteworthy push for the male engagement ring, aka mangagement ring. "The idea that the man will also wear an engagement ring gives relationships a new sense of equality. It is a pre-commitment, commitment from both the man and woman," said Amanda Gizzi of the Jewelry Information Center.

Even Johnny Depp has been spotted with a mangagement ring. So it's only a matter of time before it catches on, right?

And if it doesn't, no biggie. No one needs an engagement ring to get married anyway.