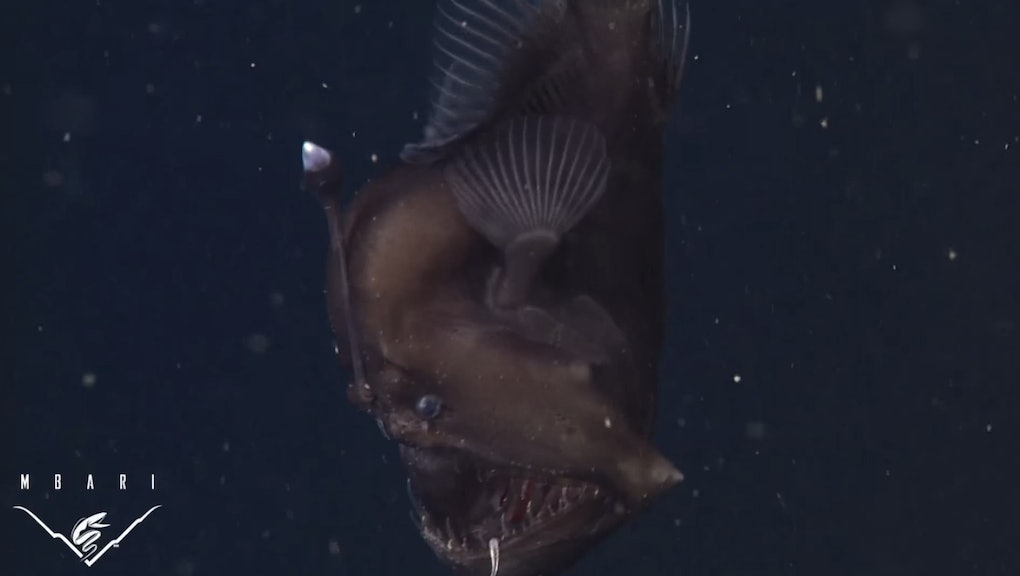 Scientists Just Photographed a Sea Monster for the First Time

This might be the closest we've ever come to a flesh-and-blood sea monster.

Thanks to the Monterey Bay Aquarium Research Institute, the world can now take a good look at the black seadevil, a type of anglerfish. Marine biologists working for the aquarium and oceanographic research center filmed footage of the bizarre looking creature at a depth of about 1,900 feet in Monterey Canyon, a submarine canyon off the coast of California, spokesman Kim Fulton-Benton told the Los Angeles Times.

Even more spectacular? The aquarium believes the footage is the first of its kind to capture the species alive and at that depth.

As IFLScience explained, the video was taken by a remotely operated submarine; the scientists also collected fish for later study.

What is this thing, exactly? You might recognize the anglerfish from the glowing orb protruding from its head. (You might also remember it as the terrifying creature that scared the fins off Nemo and Dory in Finding Nemo.)

According to the aquarium, "In some species of anglerfish, the males are tiny, with simplified body features, and they live as parasites on the females. ... The males seem to have evolved for one purpose only: to find a female and deliver sperm."

Fulton-Benton told the Los Angeles Times that "These kinds of fish, we often see between 500 meters and 1,000 meters in the oxygen-minimum zone; there's not a lot of other life forms there."

It's not the only weird-looking thing down there. The deep sea is full of creepy and freakish creatures; as Smithsonian notes, this part of the ocean has an area of 103 million square miles. And despite a "dramatic increase in exploration" in recent years, we still don't know much about life down there.

Though the footage of the anglerfish won't change all of that, it will give scientists insight into something that's been a mystery for quite some time — along with giving the rest of us sea-monster-induced night terrors.