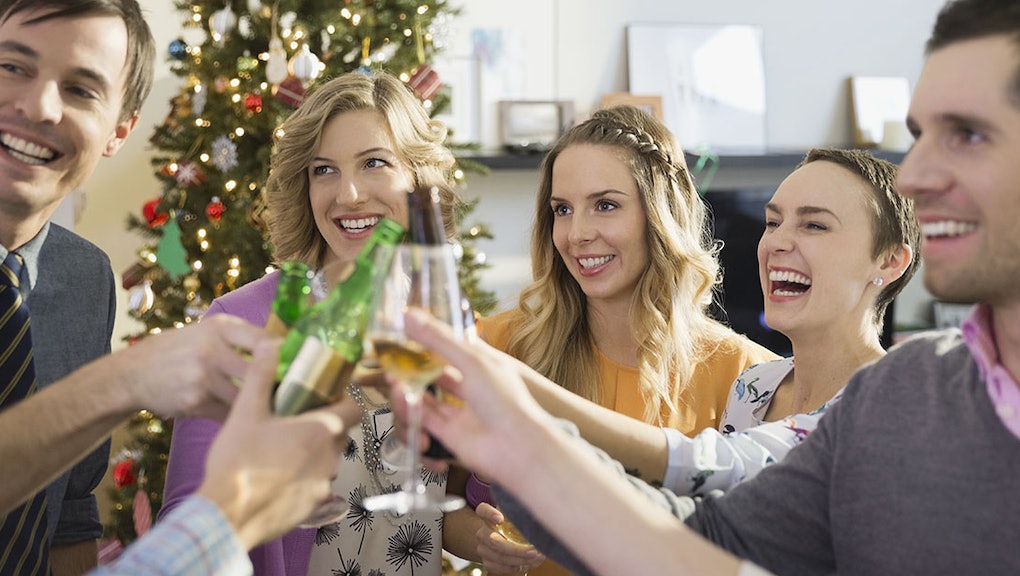 The holidays are the most wonderful time of the year: We get to drown ourselves in spiked eggnog and candy-cane cocktails until we find ourselves waking up under the Christmas tree. But now medical science might have just added some validity to those imbibing decisions.

According to research from the Oregon Health and Science University, moderate (key word: moderate, you drunk elves) might bolster the immune system and fight off infections. How did they discover this gift that keeps on giving? By taking a bunch of monkeys (whose immune systems are similar to ours) and getting them drunk.

The study: Researchers trained some monkeys to drink a 4% ethanol mixture while another group only was only allowed to drink sugar water. All, however, received a small pox vaccination. For the next 14 months, some monkeys got hammered all day long while others sipped in moderation.

"Like humans, rhesus macaques showed highly variable drinking behavior," noted lead author Ilhem Messaoudi. Halfway through the study, the monkeys received a booster shot and their bodies reacted differently depending how much they changed.

"The heavy drinkers showed greatly diminished vaccine responses compared with the control group of monkeys who drank the sugar water. But the more surprising finding: The moderate-drinking monkeys displayed enhanced responses to the vaccine compared to the control group."

In other words, while a lot of drinking could ruin your immune system, moderate drinkers enjoyed surprising health benefits.

"It seems that some of the benefits that we know of from moderate drinking might be related in some way to our immune system being boosted by that alcohol consumption," Kathy Grant, another study author, said in a release.

How does this work? The authors can't fully explain why the immune system responds positively to moderate amounts of alcohol, but Mother Jones notes that it might actually stimulate it.

This isn't the first time that science has validated our drinking. Canadian researchers said that a glass of wine has the same health benefits of hitting the gym for an hour and Czech scientists proved moderate wine drinking has positive effects on the cardiovascular system.

Not to suck the fun out of the holidays, but remember that those holiday-themed cocktails are steeped in calories. Drinking one White Russian has the same calorie count has shoveling down two double cheeseburgers and a side of fries from McDonald's.

So enjoy that candy-cane cocktail, but do so in moderation to the benefit of your waistline, immune system and, most importantly, your dignity.