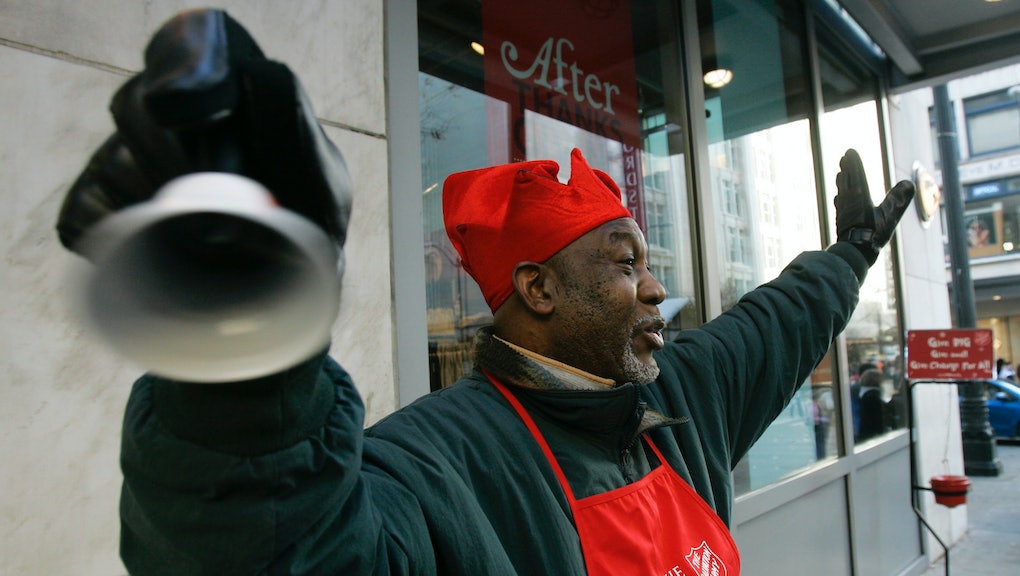 If you thought the Salvation Army wasn't too fond of the LGBT community, the charity is praying you'll think again.

The Christian-based organization is fighting back against accusations that it discriminates against gay people. It released a lengthy post on its chapters' websites refuting social media postings that it does not serve the LGBT people because of its religious beliefs.

"These accusations simply aren't true," the post reads. "The Salvation Army believes that all people are equal, regardless of sexual orientation or any other factor, including race, gender and ethnicity."

Now it's doubling down with a new video to further address what it calls "inaccurate claims." Titled "The Salvation Army Open to All," the clip features several softly spoken testimonials from its gay, bisexual and transgender staffers and clients.

Although gay groups have routinely pushed for boycotts of the Salvation Army, Lt. Col. Ron Busroe, the organization's community relations and development secretary, told Mic in a phone interview that it hasn't negatively affected donations. Busroe told Mic that the organization is now on offensive after seeing "misinformation" spread on Twitter and Facebook.

"My main concern is the younger demographic who get a lot of information from social media," Busroe said, "when they read online that the Salvation Army is anti-gay and then they must assume we are anti-gay. We wanted to say that's not the case."

Based on what? Why would anyone think the Salvation Army is anti-gay in the first place? Many, many reasons.

But these aren't just recent occurrences. The Huffington Post has compiled a whole timeline of questionable occurrences stretching back to 1986, when the Salvation Army of New Zealand collected signatures against the Homosexual Law Reform Act, which repealed the law criminalizing sex between adult men (the organizaton later apologized).

It's incidents like these that have shaped the Salvation Army's reputation for reprehensible behavior toward queer people. And officers like Busroe know that this will hurt the organization in the long run.

Actions speak louder than words: It's going to take a lot more than a video to change people's perceptions. Gay blog Queerty all but laughed at Busroe's quotes to another publication by labeling them a "bucket of lies." Instead of funding videos to whitewash the organization's poor track record of treating gays with respect, perhaps the organization should distance itself from the church that views homosexual acts as "not acceptable."

"I don't know what the Salvation Army will be like in five years or 10 years," Busroe said, adding that its views have "evolved." Let's hope they'll evolve to something that preaches actual Christian values, like "love thy neighbor" — regardless of sexual orientation.