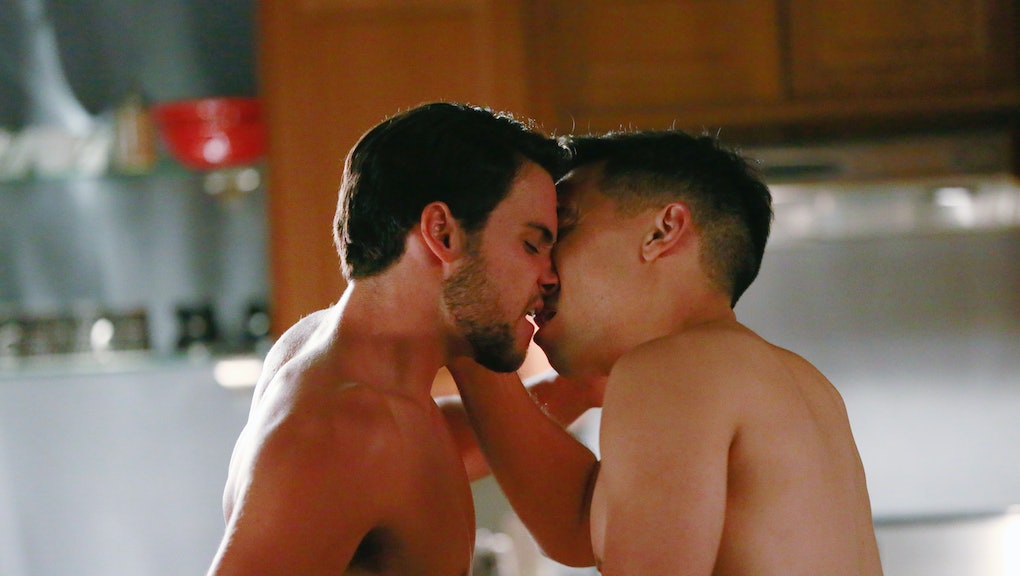 Television couples ditched their twin beds long ago, but sex hasn't come close to reflecting reality. For too long TV, especially network TV, shied away from making anything other than male-centric, heteronormative sex and sexual desire part of the story.

Slowly but surely, we're seeing change, and 2014 brought an eye-popping amount of it. More than a few standout shows finally started showing the real diversity and complexity of sex and lust, and not just from the perspective of straight men. Here are a few of the truths about sex TV finally decided to get on board with this year.

1. There's more to gay intimacy than kissing — and it can be seriously hot.

Gay couples have been on our screens for years, but almost always with a distinct lack of realistic intimacy — when was the last time you saw Modern Family's Cam and Mitch in a sexual setting?

Both Scandal and How to Get Away with Murder, not to mention HBO's Looking and Netflix's Orange Is the New Black, have changed that in a big way. HTGAWM's Connor not only has crazy, hot sex on a regular basis, he talks about it in an unashamed, explicit way not typical of the politically correct, almost completely sexless gay characters that populated shows like Will & Grace. "This time I'll do you" is not a sentence viewers are used to hearing on network broadcasts.

This may have to do the show's creator and writer, Peter Nowalk. As a gay man himself, Nowalk's been outspoken about portraying gay sexuality in a realistic way. That's not to say these portrayals are without their flaws. As noted on Slate, HTGAWM seems to have an odd issue with bottom shaming, perpetuating gay stereotypes and hetero gender norms. And OINTB too often limits its definition of lesbian sex to the arguably easier to understand oral sex.

But showrunners like Nowalk and Shonda Rhimes are moving the game forward. Gay sex is finally being shown the way other programs show heterosexual sex — because that's the way it should be.

This is where you would expect to see a reference to Laverne Cox and Orange is the New Black or Amazon's Transparent, both of which have made groundbreaking progress for trans portrayals on TV. But Kurt Sutter's Sons of Anarchy also provided us a portrayal of transgender sex this year.

Walton Goggins' transgender character, Venus, wasn't initially referred to with the right terminology or shown in a positive light, and she was first introduced as a parody. But ultimately Sons of Anarchy doesn't flinch from showing her romantic and, yes, sexual relationship with Tig, a "badass biker" dude. Their relationship is both beautiful and painful, and their sex life is as real as any other two lovers. Tig and Venus remind us that transgender sex should be a more regular occurrence on our small screens.

3. Marriage is not the end of adventurous sex.

Elizabeth and Philip Jennings of The Americans give them a run for their money. As Alyssa Rosenberg of the Washington Post points out, the show "offers one of the most piercing and tender explorations of marital sex anywhere on television." This is a couple who role-play and whose teenage daughter walks in on them engaging in oral sex. They might be married spies, but Elizabeth and Philip are proving marriage doesn't have to kill the spark.

4. Experimenting can be great – as long as it's consensual.

The Mindy Project addressed the issue head-on with a positive lesson for viewers. The point of the episode is not that we shouldn't experiment. Rather, we should have open and honest discussions of what we want in our sex lives with our partners. If you're comfortable enough having sex with someone, you should be comfortable enough to talk to them about what you want – even if it is a little backdoor action like Danny Castellano.

Girls is known for its sex scenes, both awkward and ... less awkward. But the sexual plotline that appealed to us most this season was Shoshanna and her new boyfriend — specifically someone not-so-serious to take her mind off of Ray. Shosh has no interest in a future with Parker, instead using him as break from the drama and stress of a serious relationship via a casual-yet-regular hookup.

Even less-than-edgy shows are treating casual sex as a reality for women. After several serious relationships, New Girl's Jess forayed into the world of casual dating this year, with the occasional one-night stand and even more candid talk about her sex drive. But it was her comedic experience with the Tinder-like app Dice this season that had her unapologetically trying to become more Schmidt-like — which is to say, capable of having unattached sex, with the smooth operating of a dude. Shosh and Jess's dalliances are proof positive that women are just as capable as men of sex without emotional investment, something women watching television have known for decades.

6. Slut-shaming is real, insidious and damaging — and it's time for it to end.

But this year on TV, as in real life, we started calling out slut-shaming for what it is. Scandal addressed the problematic practice as part of a plot arc involving the president's daughter's sex tape. Instead of moralizing about the dangers of teenage sex, the show instead focused on everyone's reaction to it. "It's not fair," first lady Mellie Grant told her daughter, "and it's definitely sexist. If you were a boy they'd be giving you high fives. But you're not."

Unsurprisingly, one of the most sexist shows on television gave us another example of slut-shaming this year; surprisingly, it was finally called out for it. The day after Clare and Juan Pablo of The Bachelor had their nighttime tryst in the ocean, we witnessed the single father turn around and chide Clare for her actions. As she pointed out later, "I knew when we were in the ocean, that it was a mutual feeling. If he didn't think it was right he shouldn't have done it. I would have respected that." If he didn't want to have sex, he should have said so. In a proud moment for feminists addicted to the long-running dating show, Clare refused to be labeled the "easy girl" for stepping out of line — and she refused to let a man make her feel bad about it.

7. Self-pleasure can be adventurously creative.

Orange is the New Black is famous for its portrayal of lesbian sex, mainly between the inmates. But it's Boo's – ahem – improvisation that got our attention this season.

When a screwdriver goes missing, it's all but assumed someone is going to use it as a weapon. That is, until we cut to a scene of Boo using said screwdriver as a sex toy. It's a lesson on DIY, and while not all of us necessarily want to use a screwdriver, Boo shows us that we can branch out, even when it comes to going it alone. Experimentation shouldn't stop with our partners.

OINTB wasn't the only show this year to portray oral sex (though it was by far the most explicit). Scottish time-travel romance Outlander provided fans with portrayals of female oral sex not limited to lesbians, and the show framed it (accurately) as an avenue specifically for female pleasure. With so many allusions to women giving men blow jobs on TV, it's refreshing for those in Hollywood to finally acknowledge women should get the same treatment. Oral sex and pleasure go both ways.

Outlander is doing its part to change the depiction of female sex on TV not only by showing us oral sex, but by portraying its female characters as sexually empowered beings without an ounce of shame.

While the show's main characters are married, Claire is anything but shy in expressing her desires to her husband. On their wedding night, Claire's husband Jamie is still a virgin — a setup typically tied to disappointment. But Claire uses this to guide Jamie through a sort of sexual awakening in something of a role reversal, with the woman guiding the man through the complex physical and emotional perils of sex. And not once does the show judge Claire for it. As a woman, she is allowed to be experienced, vocal, and in command in the bedroom. And there's nothing strange about it.

BONUS: Virginity is not a punchline.

The CW's Jane the Virgin turns this on its head by giving us a realistic, fully fleshed-out character who hasn't had sex. It presents differing views of virginity – some characters support her, others don't. But most importantly, the show respects the fact that Jane is choosing to wait until marriage without making her into a joke or morality play. Because, with all the sex going on, it's important to remember it's OK to wait, too.