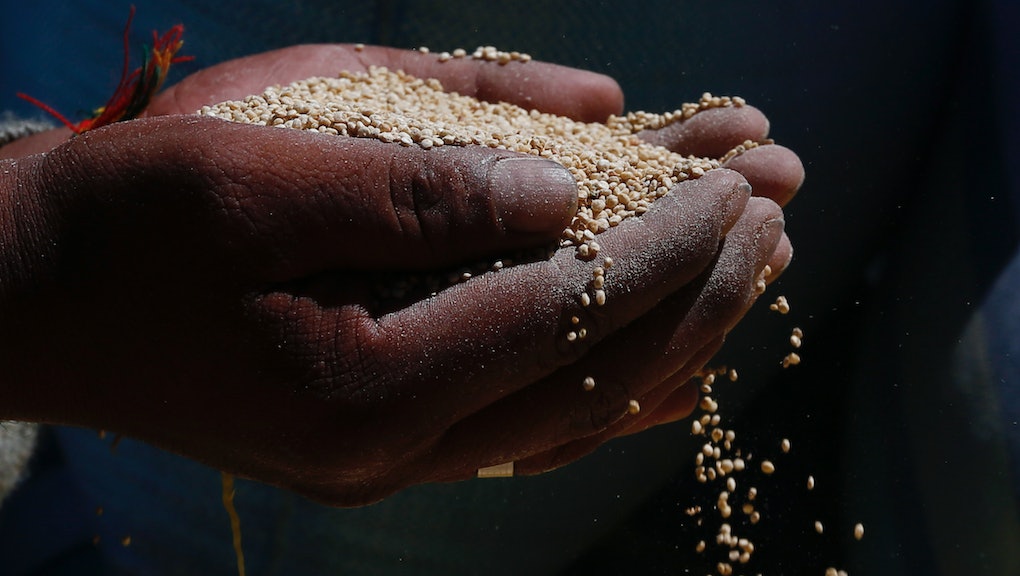 A Food Empire Is Putting Quinoa Where You Least Expect It

The protein-packed grain that health fiends have been flipping out over — and Bolivian villagers have been eating for centuries — will soon be found in the cereal aisle. In January 2015, cereal giant General Mills will begin selling "Cheerios + Ancient Grains," a mix of oats, quinoa, Kamut wheat and, apparently, plus signs.

In its latest bid to keep the 73-year-old cereal current, General Mills has figured out a way to cram the health nut set's favorite grain into the O's. Quinoa, the "titan of the so-called superfoods" group, according to the Wall Street Journal, is increasingly popular among health-conscious consumers: It's loaded with fiber, amino acids and antioxidants. It's also gluten-free, a legitimate concern for only 0.8% of the population, but a fake concern for 100% of your yoga class. Quinoa imports to the U.S. skyrocketed from 7.66 million pounds in 2007 to nearly 70 million pounds in 2013, mostly from Bolivia and Peru.

But Americans' hunger for quinoa is hurting the people who harvest it. "The appetite of countries such as ours for this grain has pushed up prices to such an extent that poorer people in Peru and Bolivia, for whom it was once a nourishing staple food, can no longer afford to eat it," the Guardian writes. "Imported junk food is cheaper."

However, with sales sagging at the cereal brand, General Mills is hoping it's healthy for the bottom line. "They're keeping their ears attuned to what's hot and trendy," cereal expert Topher Ellis told NPR.

But don't be fooled by Cheerio's marketing. The "ancient grains" moniker is neither old nor meaningful. It has "little basis in history or botany," NPR reports, and grains like quinoa aren't actually older than oats and regular wheat — they're just less common. "You could just call them whole grains," cookbook author Maria Speck told NPR.

While foodies are right — quinoa is actually healthy! — its benefits are negated when it's combined with unhealthy plate partners — including, say, sugary cereals. One serving of the "new + improved " Cheerios has five times the amount of sugar of non-ancientized Cheerios.

A serving of regular Cheerios contains one gram of sugar, which means if you're looking for an (actually) healthy breakfast, you might want to stick with the classics.