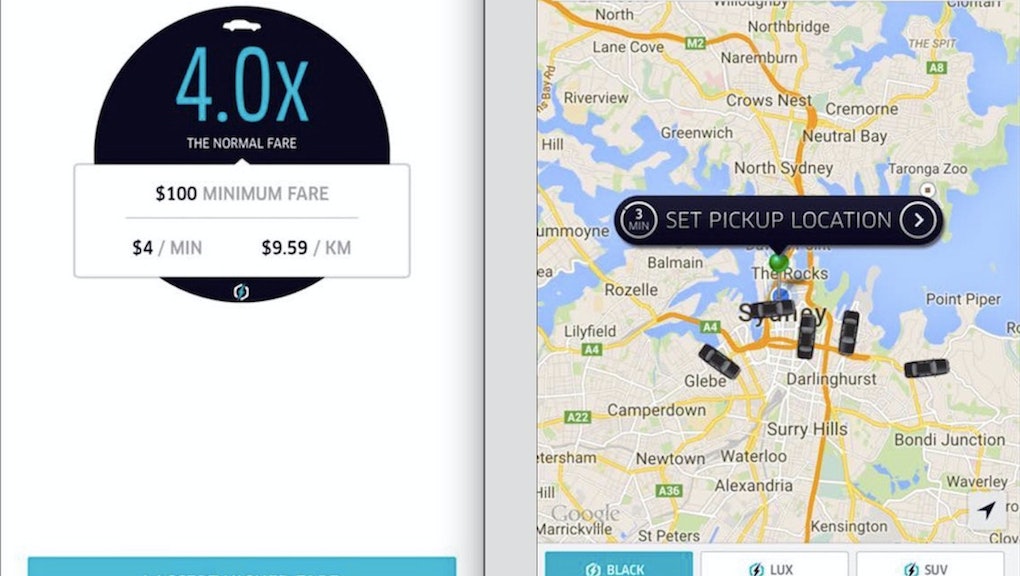 Uber Had the Worst Possible Response to Sydney's Hostage Crisis

Uber is enduring another round of controversy after the app activated its controversial surge pricing model as people were trying to flee downtown Sydney amid the ongoing hostage crisis.

The car-hailing app caught flack from its users for charging as much as four times the normal fare and added an outrageous $100 — around $82 USD — minimum base fare. The surge pricing was activated by an algorithm to entice more drivers on to the roads, but angry users saw it as highway robbery during an emergency.

Uber user Matthew Leung told Mashable he's never seen surging pricing this high and lashed out at the company. "I understand the way the business works — higher the demand, higher the charge — but four-times at $100 minimum is ridiculous," he said. "Almost price gouging at its worst."

Leung wasn't alone. Other users have been lashing out at Uber for the surge in the midst of a tragic hostage crisis, including this person on Instagram who was given an estimated fare of nearly $200 to get to the airport. It would normally cost half of that.

"As soon as we became aware of the situation, we capped it and made all rides free to people leaving Sydney's C.B.D. Uber is paying for these rides," the company said in a statement to the Times. "If riders got charged surge pricing earlier, we will refund it."

That response wasn't good enough for some. On Twitter, users called out the company for essentially saying that it wasn't sorry about about the price hikes, it was just sorry it was caught doing it. EMBED

Perhaps Uber's Australia unit could take a page from its American counterparts. In times of emergencies, the company said it would turn off the computer-dicated algorithm and cap prices. That policy is activated in several cities across the U.S., but it doesn't have an agreement in Australia notes the Times.  Now is the time for Uber to show humanity if it wants to be seen as dictated by people rather than not profits.