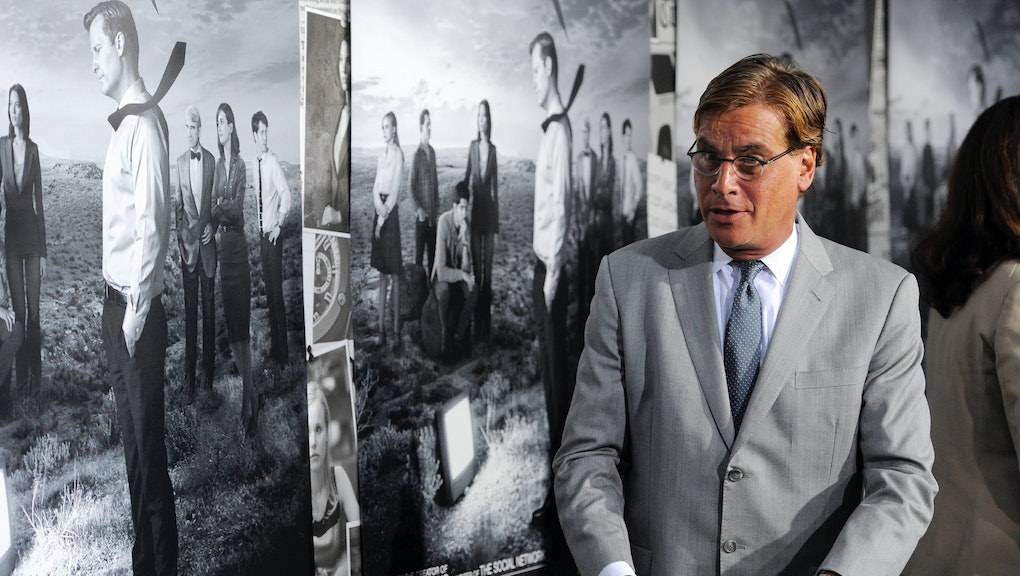 Hollywood has a sexism problem, and it's not going away anytime soon.

Despite the documented earning power of female-led films at the box office, actresses continue to have to fight for the same paychecks and respect afforded their male coworkers. This infuriating reality was thrown into stark relief this past week after a cache of emails was leaked, exposing the infuriating attitudes of industry elites, in particular, everyone's favorite mansplainer Aaron Sorkin.

The Daily Beast highlighted some of the most newsworthy information. For example, correspondence between Hollywood bigwigs revealed that Amy Adams and Jennifer Lawrence were compensated less than their male costars in American Hustle, a movie where the women had more screen time — and in Lawrence's case, far more box office power — than Jeremy Renner.

This wage gap also afflicts Sony employees. Of the 17 employees who make over $1 million, only one is a woman. And as for the two co-presidents, one man and one woman, of production at Columbia Pictures? The man makes around $1 million more, even though their titles are the same.

This pay inequality is only part of the issue. Female actors are not only paid less, they are apparently held in lower regard when it comes to their skills. In emails from Sorkin responding to the New York Times, the screenwriter displayed a blatant disrespect for female actors. Maureen Dowd's piece was related to Cate Blanchett's Oscar speech, which called out industry players for thinking films with "women at the center are niche experiences." Sorkin disagreed, however.

According to the Daily Beast, Sorkin's email to Dowd — forwarded to the co-chairman of Sony Pictures Entertainment — blamed the lack of more "movies like Bridesmaids" on a lack of scripts, something for which we'll have to take Sorkin at his word. Never mind that any alleged lack of scripts could be tied to the low number of women behind the scenes in Hollywood. The Women's Media Center found that women comprised only 18% of key behind-the-scenes roles in film in 2012 while also facing the most challenges and discrimination.

Sorkin didn't stop there, however:

Cate gave a terrific performance in Blue Jasmine but nothing close to the degree of difficulty for any of the five Best Actor nominees. Daniel Day-Lewis had to give the performance he gave in Lincoln to win — Jennifer Lawrence won for Silver Linings Playbook, in which she did what a professional actress is supposed to be able to do. Colin Firth/Natalie Portman. Phil Hoffman had to transform himself into Truman Capote while Julia Roberts won for being brassy in Erin Brockovich. Sandra Bullock won for 'The Blind Side' and Al Pacino lost for both Godfather movies. Helen Mirren and Meryl Streep can play with the boys but there just aren't that many tour-de-force roles out there for women.

Essentially, Sorkin's argument is that that women don't have to work as hard as their male peers to earn some of film's most prestigious awards. As the Daily Beast points out, "degree of difficulty" is a subjective metric. Still, it seems ludicrous to attempt to argue that Blanchett's almost universally acclaimed turn in the Woody Allen film should be viewed as somehow lesser because the female talent pool is weaker. The year of 2014 was, by the way, that included best actress nominations for both Meryl Streep and Dame Judi Dench. What lightweights!

Ultimately, however, this isn't a discussion about whether female talent is up to par with male talent — that's unquantifiable. But the pattern of disrespect and sexism in Hollywood is easier to identify, both in terms of pay discrepancies and representation. The dilemma is cyclical. When the industry lacks women writers, producers and directors ensuring roles for women on the screen, it makes it easier for men like Sorkin to swoop and reinforce exactly the kind of problematic stereotypes that create barriers for women.