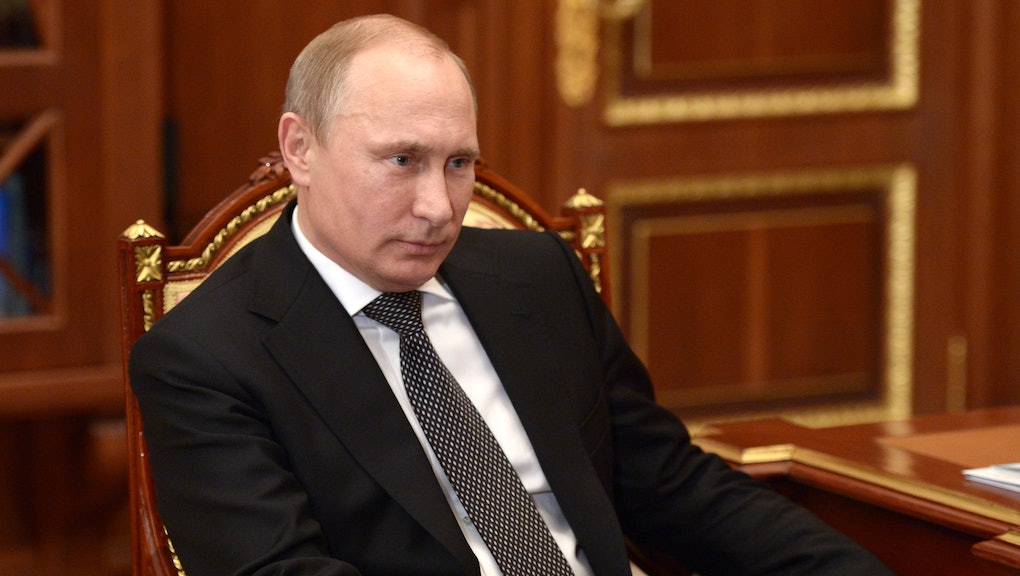 If this whole "president of Russia for life" thing falls through, perhaps Vladimir Putin could make it as a movie star.

To get the country amped for Thursday's annual press conference, state-run news channel Russia-1 has released the nuttiest, most nationalistic trailer for a presidential address since Independence Day. For 40 seconds, the trailer (almost) makes you forget about the collapse of the Russian ruble and falling gas prices that are wreaking havoc on the country's economy.

Just look at this masterpiece:

It's filled with scenes that makes it look like everything is fine in Russia. Pictures of its wins at the Winter Olympics in Sochi? Check. Proud examples of its military power in Ukraine? That's there. And, just for good measure, its evil Western enemies are symbolized by a person burning a European Union flag.

What Russia's news channels lack in Magic Walls and Anderson Coopers, it makes up in jump-cuts and the world's most dramatic music.

Although we're now sufficiently excited to watching a freakin' press conference, the video has its share of problems. For Westerners, it's jarring to see a "news" channel, state-funded though it may be, portray the president as an invincible action hero who is immune to any struggles (especially when there are countless examples to the contrary).

Vox writes that the video does a clever job of shifting people's attention away from the country's real problems:

Russian state media, by playing up the idea that the real story here is a confrontation with the West, and that Putin is a hero rather than a self-interested authoritarian who maneuvered Russia into geopolitical crisis so as to distract from the sinking economy, is just making it easier for Putin to avoid solving the problem.

All of this cheerleading only further isolates Russians. The article notes that the propaganda "serves Putin in the short-term, but makes dealing with Russia's problems much, much harder in the long-term." On the bright side, at least the Russians won't have to deal with a mumbling Wolf Blitzer for six hours.