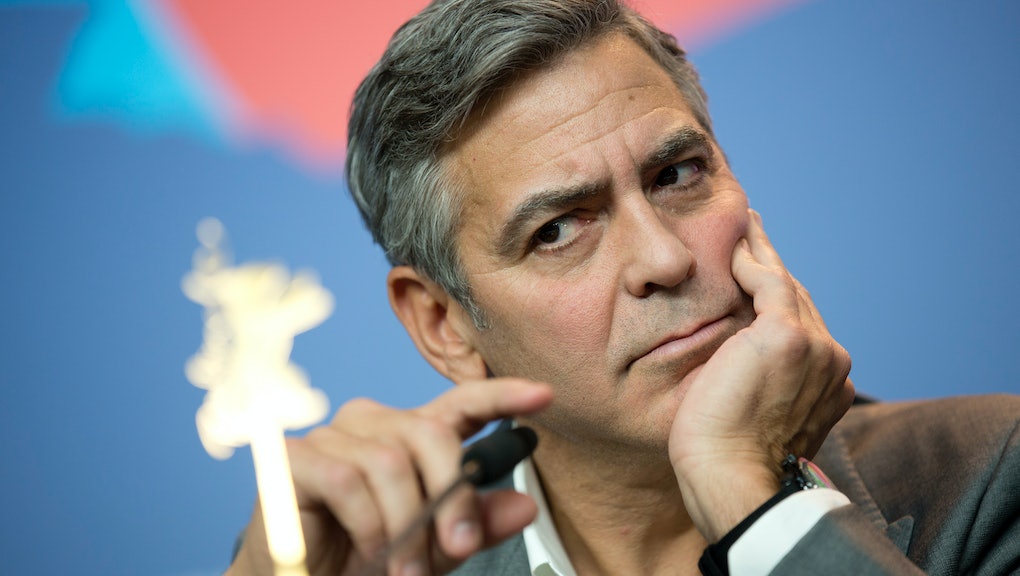 George Clooney, Hollywood's class president, is unhappy with his peers.

In an interview with Deadline, the actor lashed out at the press and his fellow celebrities for acting like cowards by caving to the hacker's demand to obliterate The Interview from existence.

Sony's decision to scrap its release plans stemmed from an allegedly North Korean-linked hacker collective known as the Guardians of Peace, whose slow-drip leak of internal Sony emails and documents culminated with terrorist threats to attack theaters where the buddy comedy was playing.

No one is more pissed about that than Clooney. He said that Sony's decision could cause a "chilling effect" with the industry and demanded to release the movie because that would be the right thing to do.

Also, like the good activist that he is, Clooney circulated a petition of support around his film industry peers to rally against the hacker's demands. No one signed it, much to his dismay.

"All that it is basically saying is, we're not going to give in to a ransom. As we watched one group be completely vilified, nobody stood up. Nobody took that stand," Clooney said. "Nobody wanted to be the first to sign on. Now, this isn't finger-pointing on that. This is just where we are right now, how scared this industry has been made."

His anger also stretched to the media, adding that "a good portion of the press abdicated its real duty" by not fully investigating the scandal. "They played the fiddle while Rome burned," he said. "There was a real story going on. With just a little bit of work, you could have found out that it wasn't just probably North Korea; it was North Korea."

The man is right.

First, Sony's cancellation has already has caused a chilling effect on Hollywood. Just one day after Sony announced its move to scrap the release of The Interview, New Regency said it was halting production of a film called Pyongyang starring Steve Carrell. At this rate, we may never see another film criticizing the world's foremost human-rights abusers again.

Even more galling is the fact that Hollywood's cowardice is thanks to a group that's not even that technologically sophisticated. The hackers accessed Sony's private information thanks to a folder clearly labeled as "passwords." It was more of a sign of Sony's security weaknesses than it was of the hackers' strength.

Clooney was also right to lash out against the "fairly large" number of people who didn't sign the petition. Soon afterThe Interview was pulled, supposed Hollywood heavyweights activated their "high and mighty" function and tweeted their disgust. Director Judd Apatow called Sony's decision "disgraceful" and Carrell called it a "sad day for creative expression." Yet, they couldn't sign a simple petition?

The blowback from Sony's decision and Clooney's derision makes a powerful case that Hollywood shouldn't cave to censorship. But it's worrying to see what's going to happen next from groups that feel emboldened by these results.