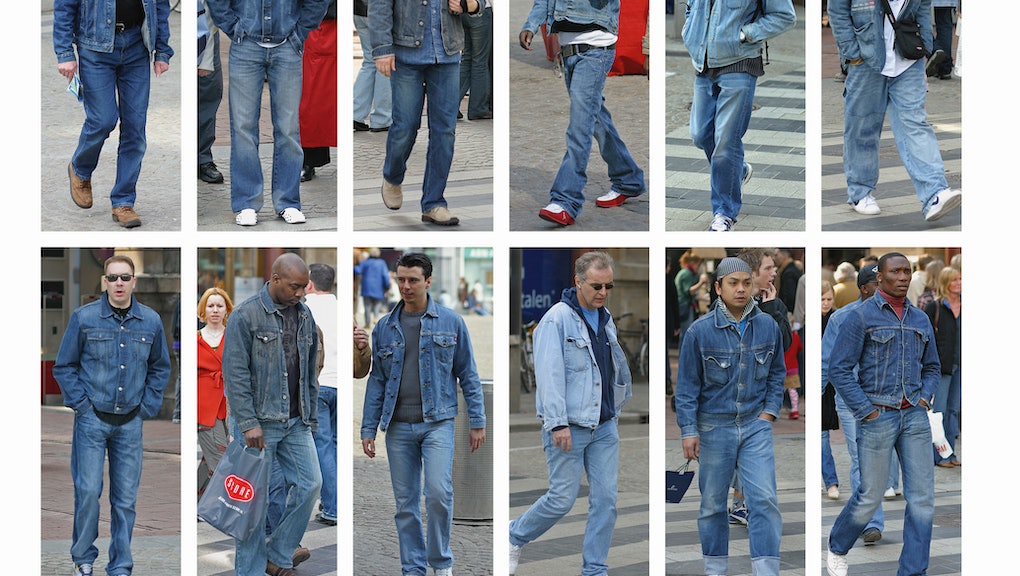 For better or for worse, we all really are alike.

That's what Dutch photographer Hans Eijkelboom found when he hopped around the world taking pictures of people's clothing in major cities for 20 years. The resulting book, People of the Twenty-First Century, brings his work together for the amusing (or depressing, depending how you look at it) realization:

We dress the same — and it ain't always pretty.

The photos in Eijkelboom's collection skew to the trendy, as the photographer visited (allegedly) fashion-forward metropolises like Shanghai, New York, Amsterdam and Paris. But the clothes, as a news release points out, "tend to be unexceptional" — as we might say today, basic.

Flannels à la Kurt Cobain were all the rage in 1995. In 1997 New York City, shirtless guys rollerblading in shorts ruled the streets, fanny packs strapped on tight. 2004 was all about men's oversized red jackets, everyone looking ready to shovel snow off Mount Everest. And 2005 was the year of the Canadian Tuxedo, aka the denim-on-denim suit (four years after Britney Spears and Justin Timberlake's dual denim outfits, mind you).

But really, the beauty of the photos is one thing that doesn't change: Our human need to fit in.

"I think, 'How can you be so naive to go to a shop, to buy clothes that sum up your personality, and not realize that, at the same time, 10,000 men and women around the world do and think the same things?'" Eijkelboom said in an interview. "But I do it too, of course. We're told we're individuals, and we buy these things, and we are a product of the culture that we live in."

And sometimes that culture produces some pretty bad clothes. But if these photos prove anything, it's that at least when we're wearing heinous clothes, we're all in it together.

Eijkelboom's People of the Twenty-First Century is available in stores or online.