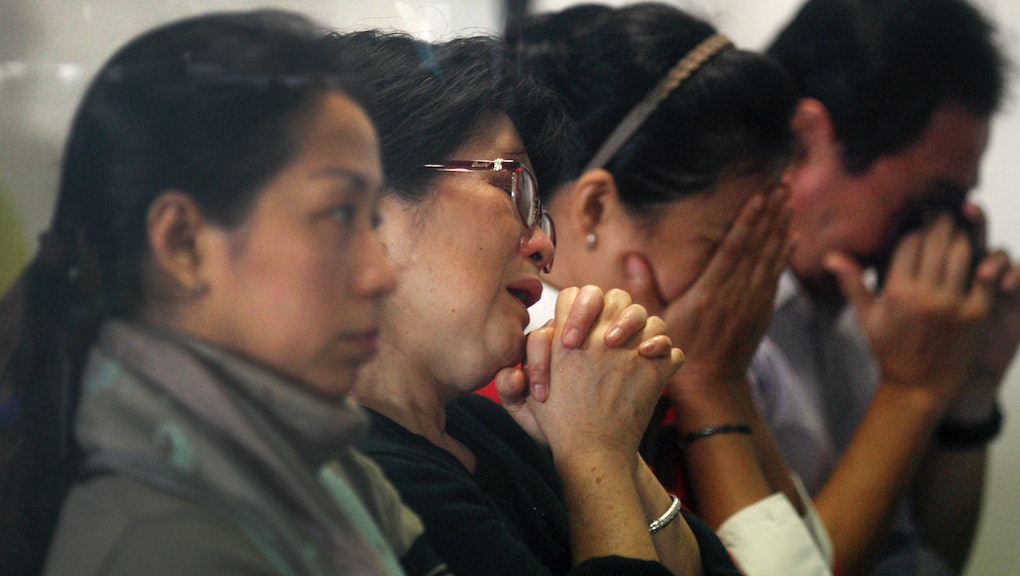 Officials: Missing AirAsia Flight Likely "at the Bottom of the Sea"

As the multinational search for the missing AirAsia Flight QZ8501 wraps up for its second day, government officials are coming to the grim conclusion the passenger jet, which disappeared Saturday en route from Indonesia to Singapore, may be "at the bottom of the sea."

At a press conference Monday, Indonesian National Search and Rescue Chief Henry Bambang Soelistyo said that based on the plane's last point of contact with air traffic controllers, "the evaluation would be that any estimated crash position is in the sea, and that the hypothesis is the plane is at the bottom of the sea."

Unidentified debris spotted: Helicopters, boats and surveillance aircraft from Malaysia, Indonesia, Singapore and Australia concluded their second full day of search-and-rescue operations Monday evening with no significant findings after flying around the choppy Java Sea for more than 10 hours.

Throughout the day, there were reports of debris and oil throughout the area where the plane is believed to have gone down.

Searchers were looking into reports of an oil slick off the coast of Belitung Island, near where the plane lost contact. "We're checking whether it's jet fuel or fuel from a ship," said Air Force spokesman Hadi Tjahjanto.

There were also reports of "suspicious objects" from an Australian Orion aircraft floating near Nangka Island, an area 700 miles northeast of where the plane went down. After searchers raced to area, Bambang Soelistyo said the weak signal was from a personal locator beacon and not the missing plane.

"My goal is to locate it as soon as possible," Bambang said. "We're doing the best we can."

The background: The Airbus 320-200 was headed to Singapore from Suabaya, Indonesia, and scheduled to land Sunday morning, but the plane lost contact with air-traffic control at 7:24 a.m. Sunday in Singapore (about 6:24 p.m. EST on Dec. 27).

Indonesian officials say the government has dispatched a dozen navy ships, three helicopters, five planes and "number of warships" to locate the AirAsia flight. Singapore and Malaysia also sent ships and planes, while the Australian Air Force sent a search plane to assist.

That fleet is canvassing an area roughly 66,000 square miles in four sectors, with the bulk of the search initially concentrating on a 250-mile stretch of the Java Sea. The area was expanded Monday to include the Karimata Strait and the coasts of Belitung Island, officials said.

Miserable weather has been hampering search efforts, but Indonesian Vice President Jusuf Kalla said he's confident the plane will soon be found. "We don't set deadlines," he said. "What is important is we find the plane and its passengers."

But he, and the searchers, are also battling with reality. At a press conference on Monday, Kalla was asked about the prospects of finding any survivors at the point. "We pray for them, but we realize the worst may have happened," he admitted.