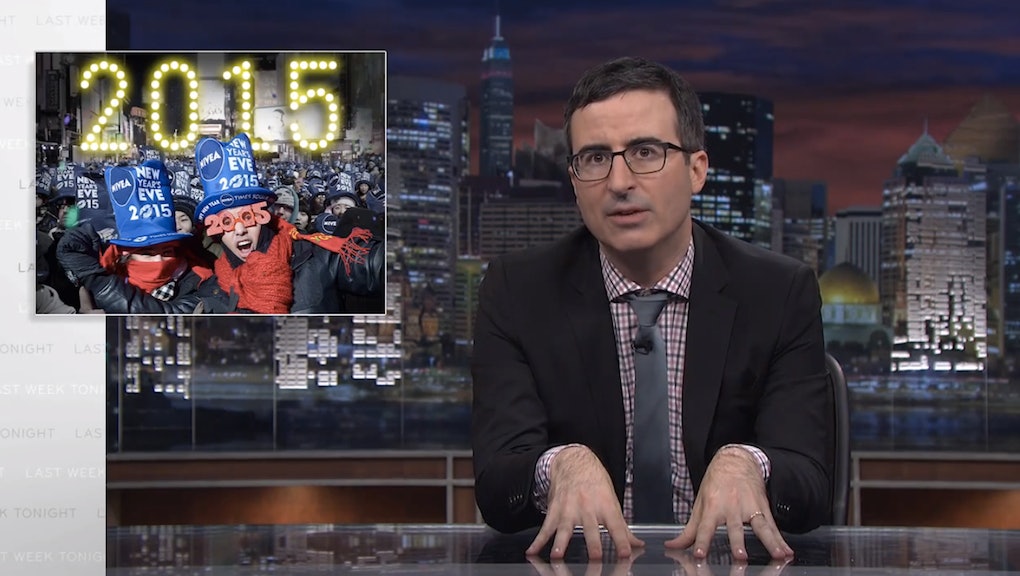 Admit it. New Year's Eve is truly the worst. John Oliver is here with a belated Christmas gift: a validation of your unpopular opinion that ringing in the new year is more hassle than it's worth.

The HBO host broke from his hiatus to rail against everyone's least favorite holiday, serving up an on-point critique about why it's best to avoid going out on Dec. 31, since you're probably just going to have a miserable time.

"New Year's Eve is like the death of a pet," he says. "You know it's going to happen, but somehow you're never really prepared for how truly awful it is."

"It combines three of the least pleasant things known to man," Oliver says. "Forced interaction with strangers, being drunk, cold and tired, and having to stare at Ryan Seacrest for five solid minutes, waiting for him to tell you what the time is."

What's Oliver's solution to avoiding your friend's apartment, since "sitting on your friend's sofa watching hummus turn brown all night" is a terrible way to spend the night? Lie.

"The first line of 'Auld Lang Syne' is 'Should auld acquaintance be forgot' – and there's no better way of doing that than completely blowing off all your friends and family," Oliver says. "If you do this right, you will be in bed on New Year's Eve at 11:45 p.m. after watching all five Die Hard movies."

Still, the one good thing remains about ringing in New Year's: It's just a few more weeks until Last Week Tonight finally returns in February.