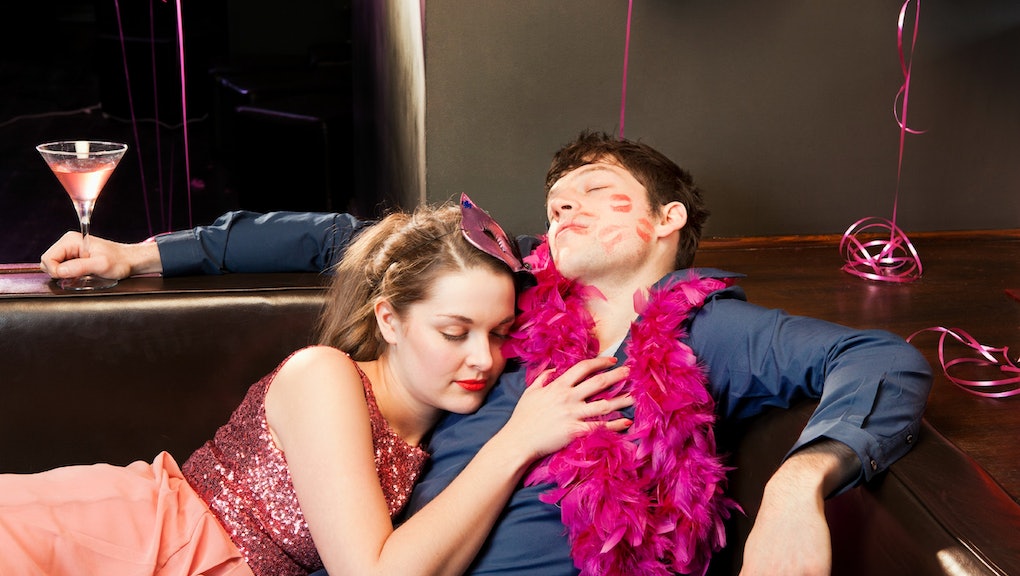 A User's Guide to Being Hungover on New Year's Day

It's the morning after another successful New Year's Eve celebration and you're ready to die.

Success? Whatever, as long as you had fun. Now it's time to deal with the not-so-fun part: the dreaded, nauseating, head-throbbing and almost life-threatening hangover. It might not seem like there's light at the end of the tunnel — on second thought, that's probably a good thing — but we're here to help you kill that hangover.

Water — lots of it

That GIF should be you right now. Whatever it takes to swallow as much water as you conceivably can since alcohol dehydrates. The nastiest side effects are the headaches since alcohol sucks all the water from your brain, causing the organ "to decrease in size and pull on the membranes that connect the brain to the skull, resulting in pain."

Coconut water and electrolyte-heavy drinks like Gatorade are also helpful. Basically, this is the one day of the year when it's OK to drink heavily — water, that is.

Besides being gentle on your stomach, eggs are loaded with protein and vital nutrients. They also contain cysteine, an amino acid that helps "mop up alcohol's leftover toxins," according to Men's Fitness. But don't pair it with a piece of burnt toast since that's a disproven hangover remedy.

Just look at this delicious treat of the jungle. As we've learned before, alcohol is no good for your system because it drains the water from your body. And all that peeing from the night before also depletes the body of potassium. Without potassium, the body enters freak-out mode that causes shaky muscles and high blood pressure.

"Alcohol actually draws water from your body's cells, creating more urine and causing you to literally flush potassium down the toilet," Details wrote. "Low levels of potassium are linked to weak, shaky muscles and high blood pressure — all common hangover symptoms, according to the National Institute of Health.

No worries: A banana can shoot your potassium levels right back up to where they belong.

Hair of the dog

Actually, no. Contrary to popular belief, drinking while hungover only delays the inevitable. Hangovers are so unpleasant the liver is still processing the toxins left over from alcohol metabolism, and drinking more  can make the symptoms seem to lessen at first. But as the masterminds of How Stuff Works writes, it "will only make the situation worse once the liver breaks the alcohol down, because it will have even more toxins to deal with." Yikes.

While it's not a cure, it's more of a prevention item in case you were thinking about it. If you can handle more alcohol, good for you, but no one in their right mind recommends more drinking after a night of drinking.

If you're lucky enough not to be broke after a night of drinking, blow your money on this: For $300, a doctor will show up (in select cities, like New York) in a fancy trailer with an IV to pump you full of essential nutrients. It's labeled as a "discrete luxury service of intravenous hydration therapy," but that's just another way of saying they'll zap that hangover through your veins.

After following our sage advice, life is looking up! Not too up though since it's cold outside, and the idea of leaving the couch is preposterous. Here are some ways to kill all of that free time.

Netflix all the things

It's here, it's finally here: Every episode of Friends on Netflix. If you've already seen every episode on TBS, Nickelodeon and the local CW affiliate, there are other new movies popping up on the service starting Jan 1, 2015, such as Mean Girls, Election, Fear & Loathing in Las Vegas and Cast Away.

Cable networks are in repeat mode since they, too, will spend New Year's Day deliriously hungover. IFC is looping every season Portlandia starting at 6 a.m., while FXM is re-running the first season of its sister network's critically acclaimed hit Fargo at 11 a.m. On Comedy Central, it's a full-day of Futurama repeats, and USA is catering to your parents with a NCIS marathon.

A full list of every 'thon has been dutifully collected by SitcomsOnline.

Good thing we're not playing because this all sounds exhausting.

ESPN, ESPN2 and ABC are all showing tons of football, which eventually leads up to the Rose Bowl Game at 5:15 p.m. on ESPN. There's something called "soccer" on NBCSN with Tottenham facing off against Chelsea at 12:30 p.m.. And the outdoor NHL Winter Classic between the Chicago Blackhawks and Washington Capitals starts at 1 p.m. on NBC.

Happy New Year, readers. May your night be enjoyable and, thanks to us, your hangover a little less burdensome.