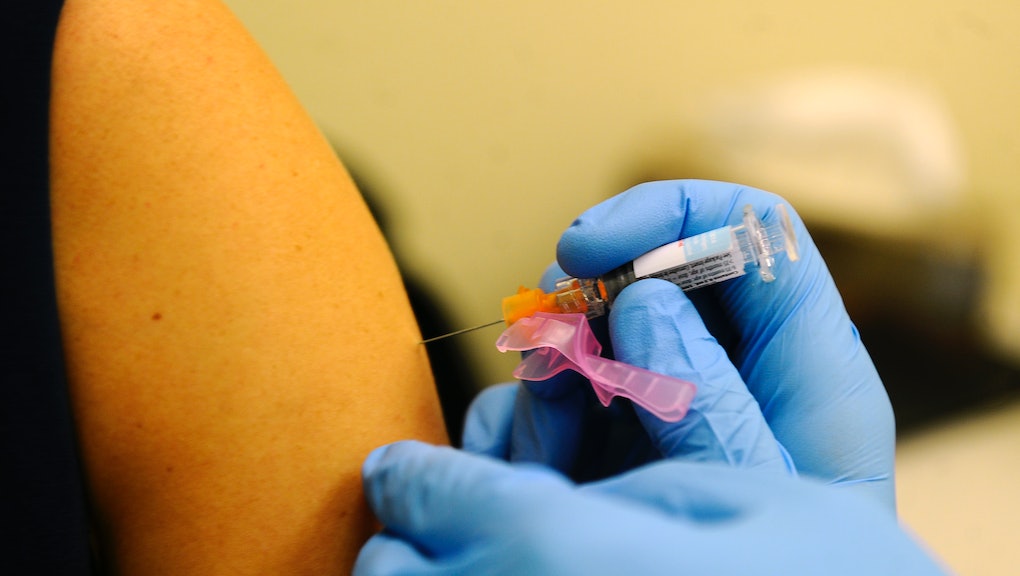 This Year's Flu Season Is Reaching Epidemic Proportions. Here Are the States Affected Most

The Centers for Disease Control and Prevention (CDC) announced Tuesday that this year's flu season has breached the "epidemic threshold" as the virus continues to spread across the United States.

CDC came to that conclusion after its data revealed startling information, including the fact that nearly 7% of all deaths in the U.S. for the week ending Dec. 20 were due to pneumonia and influenza. In order to qualify as an epidemic, the number of deaths caused by the flu and pneumonia must reach the threshold of 6.8%.

Also, 15 children have died from the flu and the number of states reporting "high" levels of the virus jumped from 13 to 22 in just one week. The data also shows the hospitalization rate is the highest among 65-years-old and older at 38.3 per 100,000 people.

With about half of the country reporting influenza-like-ilnesses, this the earliest time the CDC has declared the flu season an epidemic since the 2012-2013 season. Although it sounds alarming, the Washington Post points out that the flu season always reaches epidemic levels, this time it's just a bit earlier — even though that means too early to determine "just how severe this year's epidemic will be."

Who is the worst off? The CDC says the southeast is feeling the brunt of the flu. Twenty-two states, including North Carolina, Maryland and Virginia all registered high levels of influenza-like illnesses.

Six states recorded moderate activity (Colorado, Michigan and New Mexico to name a few) and another eight states (including Washington, Nevada and Iowa) also had low activity. The CDC data was not sufficient enough to calculate how bad the flu outbreak is in the District of Columbia.

Why is the flu so bad, so early? This year's most dominant strain is the H3N2, a type of flu that causes more hospitalizations and death.  The CDC warned in early December that this year's flu season would be particularly bad because the vaccine it built for this season isn't tough enough to fight against the H3N2 strain.

Medical experts like Trish Perl, who heads up the Johns Hopkins Medicine Office of Epidemiology and Infection Prevention, have told the Post that "the most concerning thing about the flu season this year there is a mismatch between the predominant strain that is circulating and what was put in the vaccine."

It's still worth getting vaccinated. The flu shot isn't completely useless. As Mic reported earlier this month, the shot offers protections against the other two flu strains circulating across the country and can also lessen the severity of the flu's symptoms if contracted.

"We are recommending strongly still that people who haven't been vaccinated get vaccinated," CDC flu expert Dr. Joe Bresee said earlier this month. "Every year, vaccine is the best way to protect yourself against the flu."