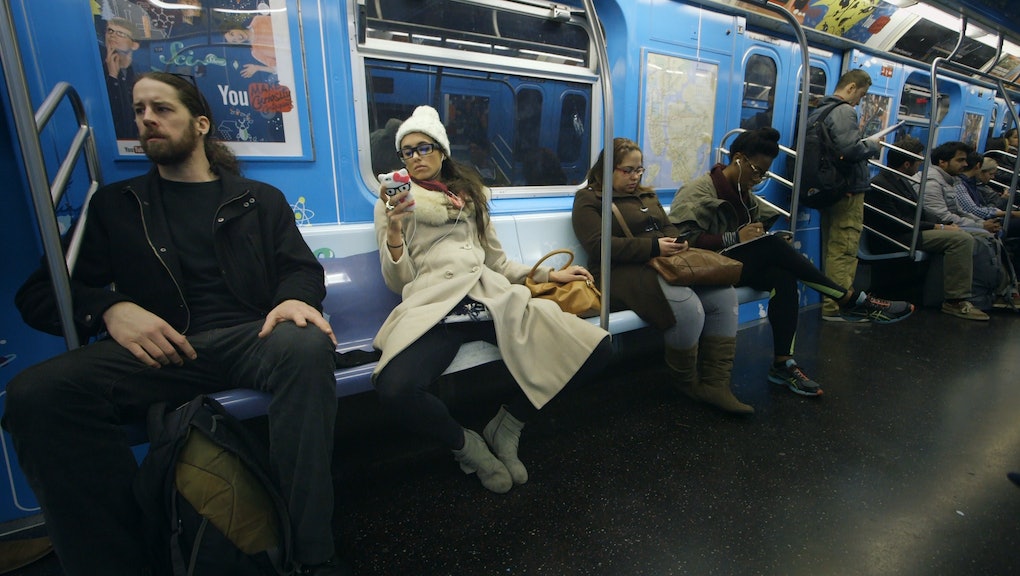 Watch What Happens When a Woman Tries "Manspreading" on the Subway

Sitting on the subway has never been this controversial.

Labeled "manspreading" after its most frequent offender, people who spread their legs wide on subways and buses have been the target of much public ridicule recently, culminating in a new anti-manspreading campaign in places like New York City.

This overt solution to a widespread (pun intended) problem was met with loud protests from men's rights activists, including a petition in Toronto that claims men need to take up more space by virtue of their genitalia and posture. According to these "activists," being the proud owner of a nut bag precludes you from having any respect for the humans around you.

In the online petition, the Canadian Association for Equality writes, "We can't force women to stop breast-feeding on busses or trains and we can't force men or women to stop bringing strollers on, why should we force men to close their legs?" Yeah, if we can't deprive babies from the food and portable shelter they need to survive, why should we deny men the privilege of using twelve extra inches for their balls? This is just one of many wacky arguments that have been used by men's rights activists to defend their right to spread their manhood across three seats.

Intrigued by this faux outrage, Mic decided to put the logic of these MRAs to test and find out if men really were being unfairly targeted. Do men take up more space just because they can? What happens when women act the same way?

As it turns out, people respond very differently to a woman taking up tons of space on the subway. It involves a lot more staring, glaring and photo-sharing. When men do it? Not so much.

By virtue of being occupied by both men and women, space is inherently gendered. The way women and men interact is guided by norms and scripts that steer our behavior in a way that is so powerful that it is often unconscious. Research shows that when in public, women tend to occupy less space, holding legs closer together and keeping their arms closer to their bodies. Men on the other hand are more likely to have their legs spread at a 10- to 15-degree angle and keep their arms 5 to 10 degrees away from their bodies.

But this isn't just about space. Researchers have found that taking expansive body postures doesn't just make people feel more entitled, it also makes them more likely to steal, cheat and fail to respect traffic laws. So manspreading can breed bigger problems than just crowded subway cars: It reinforces attitudes and behaviors that are harmful for society as a whole.

Women are subconsciously taught that they are meant to take up less space at an early age. As Sandra Bartky has remarked before, "appropriate" feminine body language such as keeping your legs crossed and arms close to your body communicates submissiveness. This in effect reinforces damaging myths about what it means to be a woman.

"In groups of men, those with higher status typically assume looser and more relaxed postures; the boss lounges comfortably behind the desk while the applicant sits tense and rigid on the edge of his seat," she writes. "Higher-status individuals may touch their subordinates more than they themselves get touched; they initiate more eye contact and are smiled at by their inferiors more than they are observed to smile in return."

This also gives some insight into why a man might not care that he is brushing up against a woman's legs. Given the frequency of sexual harassment in subway cars, it seems like the least men can do is avoid unwanted contact. Women and men are equal in law, and that includes the right feel safe and comfortable in public spaces.

Ultimately, our experiment supported what many women's rights advocates already knew — that being a decent human means understanding the difference between personal comfort and public safety. Sorry, dude, the status quo just isn't working out for us. It's not your balls; it's you.