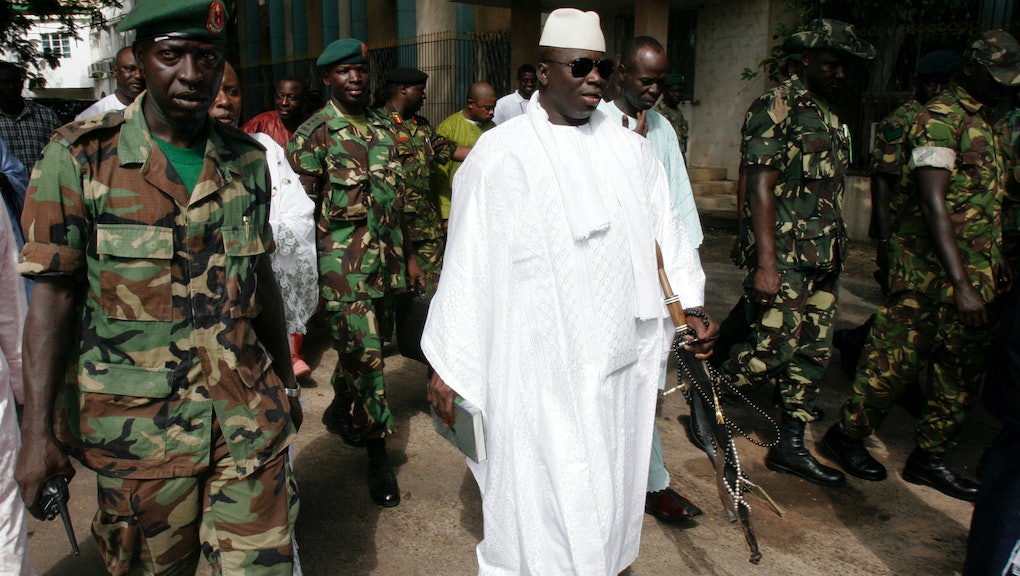 Two Americans Have Been Charged With the Attempted Takeover of Gambia

Two American men have been arrested and charged with plotting to overthrow the government of the African nation of Gambia.

The BBC reports that Gambian authorities were first alerted to the plot when the 10 to 12 foreign dissidents involved failed in spectacular fashion. On Tuesday, two teams armed with smuggled assault rifles attacked the State House, the president's main residence, in the capital of Banjul, apparently aiming to overthrow autocratic President Yahya Jammeh. But they didn't make it very far; armed guards killed several of the men at the scene and drove off the rest.

"Njie was not present at that meeting, instead waiting in a safe place until the assault teams took control of the facility. However, when one of the assault teams approached the State House and fired a shot into the air, the team began taking heavy fire from the guard towers," the Justice Department said. "Although numerous conspirators on the assault teams were killed or injured during the failed attempt to take control of the government building, Faal was able to flee the scene and he ultimately returned to the U.S. Njie also returned to the U.S."

The background: According to NPR, the original plot was a little less dramatic. Njie, Faal and their crew believed that they could simply assault Jammeh's presidential convoy as it traveled through the country. They were under the impression that his security team, unwilling to die for him, would simply lay down their weapons. This plan fell apart when Jammeh unexpectedly left the country, leading the team to instead decide on the suicide mission against the State House.

Below is part of an affidavit from FBI special agent Nicholas Marshall from the filed criminal complaint against Njie and Faal, outlining the events surrounding the attack and the attack itself:

While their attempted putsch might have been a bad idea, the dissidents could hardly be blamed for harboring an intense hatred for Jammeh. His government has disappeared critics, imprisoned and tortured members of the media, and in 2012 threatened mass executions of death row prisoners. Recent laws passed in the country penalize "aggravated homosexuality" with life in prison, and secret police are everywhere.

Jammeh himself is a mystic who apparently believes in witches. He ordered a government crackdown on supposed practitioners of the dark arts in 2009, which Amnesty International reported resulted in hundreds of people being arrested and forced to drink an unknown hallucinogenic substance. The Telegraph's Colin Freeman writes that behind a veneer of a tourism-friendly modern country, the Gambian government rules through blatant patronage, suppression and force.

What it means: Half-assed attempts at regime change are nothing new, especially ones involving ambitious foreigners or mutinous exiles. In the 1980s, a group of armed Southerners (mostly Ku Klux Klan members) attempted to take over the nation of Dominica. French-speaking white mercenaries tried to seize control of the Muslim-majority Comoros in 2001. A few years later, former British solider Simon Mann was arrested while plotting a similar takeover of Equatorial Guinea.

It seems that this time, Njie and Faal were only successful in enraging Jammeh's government. "We will get to the bottom of this and we will not spare anybody," the Gambia president said during a recent television interview, according to the Point. "I will set an example and let everybody be prepared for that. Enough is enough. They want to destroy our country, we will destroy them."