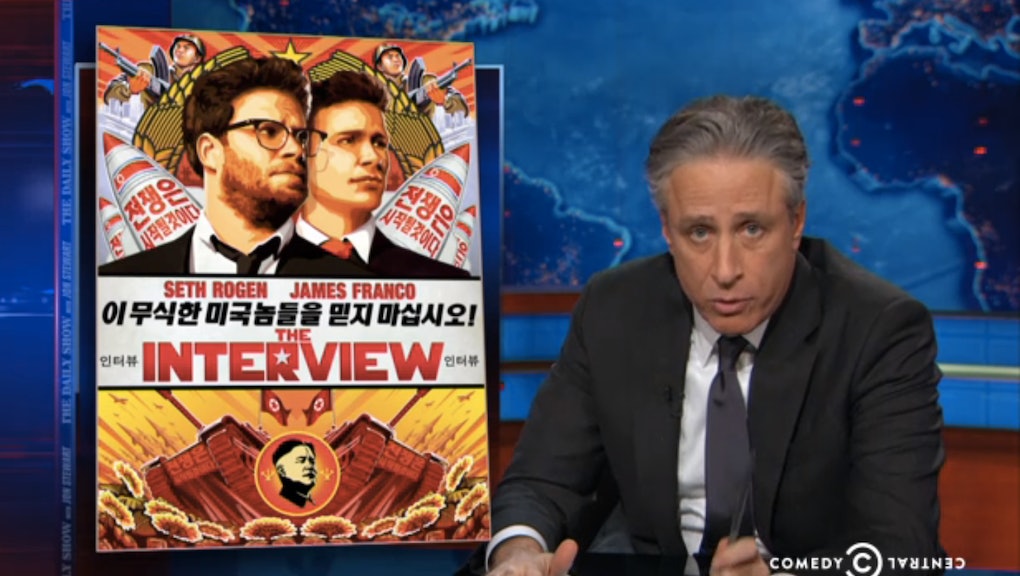 Jon Stewart Returns With a Stern Message for North Korea

Jon Stewart returned from his holiday hiatus to deliver a harsh message to North Korea: Don't screw with our movies.

"Listen, North Korea," he said on Monday's show. "You can mess with a lot of things, like the postal system or the water system, but when you start fucking with our holiday releases — the precious cinematic delights we partake in to avoid having to talk to our families — you've stepped on a land mine."

Stewart was referring to The Interview, the controversial James Franco and Seth Rogen comedy that reportedly riled up North Korea and compelled its team of hackers to leak private emails of Sony employees.

As a result, President Barack Obama issued more sanctions on the communist country, including putting North Korea back on the United States' list of states that sponsor terrorism. To which Stewart responded: Ooooh, scary.

"You made the list, buddy," he said. "That goes on your permanent record. Good luck, Kim Jong-un, getting into Oberlin's pre-med program now."

Yet Stewart was left puzzled about why North Korea would do such thing because no reasonable country just snoops on its people's emails. "Our anger is no surprise," he said. "These hackers violated our privacy. They read our emails. What kind of a country does that?"

Oh, America does that. Stewart played a series of news clips about Edward Snowden's revelation that the NSA can read emails, chats and personal conversations without a warrant.

"At least when we spy on us, we have the decency not to leak mean shit about Angelina Jolie," he snaps. "Monsters!"