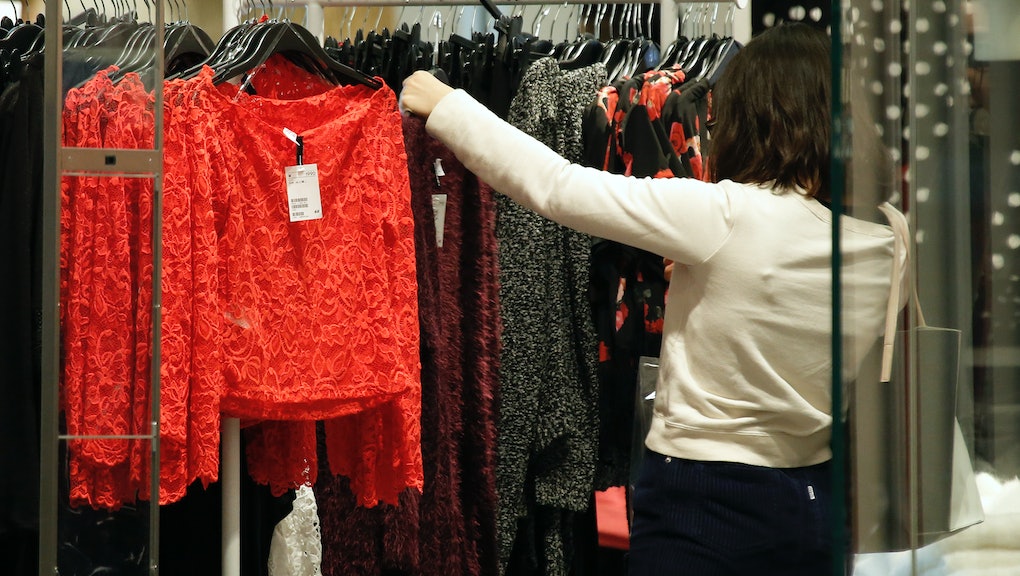 The gender binary has long thrived in the world of fashion.

Fashion retail, like so many other spheres of society, has reflected society's dogged affinity for gender definitions as long as anyone can remember. Stores are gendered, with separate apparel for men and women, which is then divided into separate sections, or even floors, with their own gender-specific fitting rooms.

The result is that for many shoppers, particularly transgender and gender nonconforming people, shopping is a problem. The clothing that culture says one should buy is not the clothing that feels right.

But that is changing as fashion boldly plows through those strict gender lines — and the rest of society should be taking note of how they're doing it.

Hemmed in by clothing categories: When it comes to clothing for trans and gender nonconforming shoppers, one problem is fit. "Trans bodies sometimes don't fit into the off-the-rack styles and sizes the majority of the public is able to make use of," transgender issues essayist Parker Molloy told Mic. "While this isn't exactly unique to trans people, as cisgender [non-trans] people come in all shapes and sizes as well, it's particularly frustrating to learn that your hips are too narrow, shoulders too wide, breasts too small and so on, when looking for clothes."

That said, bodies have almost always been able to find clothes to wear, as centuries of transgressive outfits and cross-dressing have proven. The second and bigger challenge is finding the clothes that actually fit a person's identity.

"Clothes dictate what should be labeled 'male' or 'female,'" said Lauren Lubin, author and producer of the documentary We Exist. Dresses, heels and jewelry for women and suits, ties and button-down shirts for men: There aren't strict guidelines, but they are undoubtedly sartorial signposts.

Those signposts set potentially damaging expectations. "The pressures to express and behave according to an unfair and outdated standard of gender roles or face social consequences," writes Christin Scarlett Milloy on Slate, can make selecting clothing a fraught activity.

"Retail therapy" is anything but therapeutic: Those traditional gender expectations can turn shopping into an uncomfortable experience for trans and gender nonconforming folks. Weird stares, cruel sales associates and awkward dressing room experiences make the process of picking the "right" clothing even tougher.

Kylie Jack is just one woman who experienced harassment in a lingerie shop while shopping for bras. Macy's also found itself in the spotlight for refusing to let a transgender woman use a ladies' fitting room. Other stores have ambiguous dressing room policies, as Styleite uncovered when it inquired into the dressing room policies of six major retailers.

"Most of the world can grab an outfit off the shelf, step into a dressing room and check out without too much of an issue," said Molloy. "Many trans people have to worry about whether they'll be yelled at, humiliated or kicked out of a store simply for trying to use the dressing room."

But a cultural shift is underway: There is a noticeable change happening to the gendering of clothes, at both the DIY and retail levels. Efforts of shoppers to take matters into their own hands are evident in trans clothing swaps and online dialogue on Quora threads, blogs and subreddits like transfashionadvice, all crowdsourcing advice on how to find clothes that fit.

On the retail level, clothing lines are taking a more nuanced approach to masculinity and femininity. Marimacho, a Brooklyn-based line highlighted by PBS earlier this year, makes menswear for the "unconventionally masculine" customer. Bindle and Keep, also based in Brooklyn, designs custom suits that have found unexpected fans in transgender shoppers who appreciate the customization.

These clothing lines turn up on sites like Dapper Q, which bills itself "a queer fashion revolution." And more mainstream fashion brands have taken note and begun casting more and more transgender and gender nonconforming models to sell their wares.

But there's more to retail than just reshaping clothing — it's the entire shopping experience, which requires welcoming retail spaces that don't force people to pick limiting categories simply by walking through the door.

Thankfully, progress is arriving on that front, too. More stores, such as H&M and Urban Outfitters, have expressly unisex fitting room policies, and tellingly, the aforementioned Macy's dressing room incident ended with the firing of the discriminating employee.

It's an encouraging response to a problem that runs much deeper than shopping. It's about the experience of occupying public spaces comfortably in general, something too many trans and gender nonconforming people still don't have. Doing away with the antiquated binary system in fashion is just one modest step to eradicating the confining gender definitions that govern so much of life, from kids' toys to college housing to public bathrooms to even Facebook profiles.

And while unisex clothing and dressing rooms are a positive development, the real goal isn't gender blindness so much as the recognition of gender fluidity and validating the freedom for individuals to self-identify. It's about, you might say, making acceptance the new black.