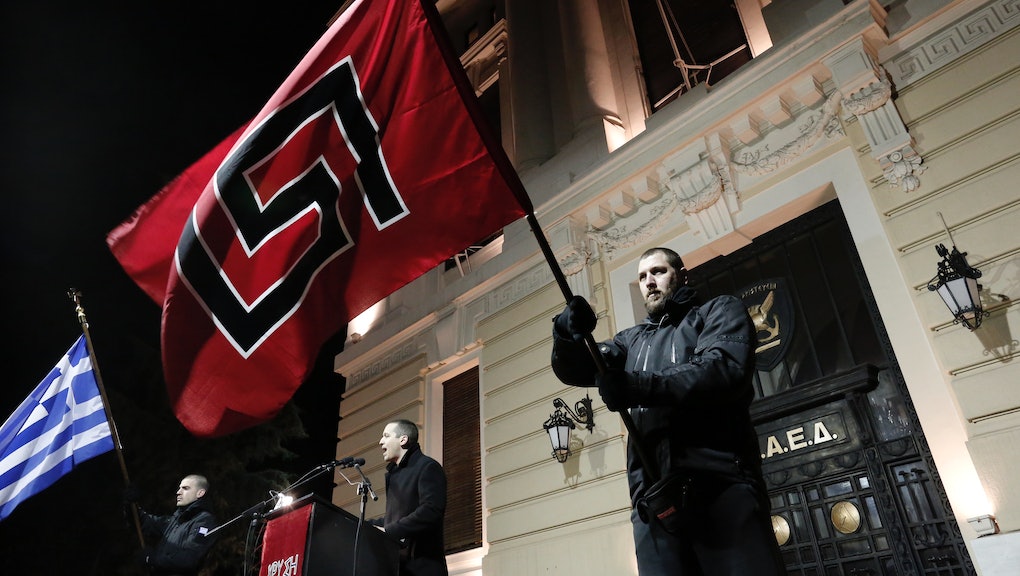 Whatever the assassins of French satirical newspaper Charlie Hebdo's journalists, editors and cartoonists were hoping to accomplish by slaughtering a dozen innocent people on the streets of Paris, they have failed.

Their grievances, legitimate or trivial, are now destined for the rhetorical trash heap, and the greatest foes of equal treatment and respect for Muslims in Europe will be emboldened once again to continue their quest to create a neo-fascist "Europe for Europeans" — and to eliminate anyone who stands in their way.

Europe's extreme right is on the rise: The history of right-wing terror within the European Union dates back to before the Beer Hall Putsch. But after the defeat of the Third Reich and the isolation of Francoist Spain, fascist movements and parties were largely pushed to the fringes of European political discourse. That is, until the Great Recession.

The popularity of right-wing parties is cyclical in Europe — the movements typically target disaffected citizens struggling with high unemployment rates, home foreclosures and bankruptcies, which means that their popularity grows during economic downturns and fades in boom times. The severity of the global financial crisis of 2008 was the perfect environment for the movement's resurgence. Austerity measures have been near-absolute disasters, eliminating vital services and exacerbating the effects of record unemployment.

This has left a generation of Europeans who are economically disadvantaged and feel politically disenfranchised, a fertile recruiting environment for far-right parties and terrorist groups alike. Germany's intelligence agency identified some 21,750 far-right extremists in their country alone, 9,500 of whom are "potentially violent."

According to a now-infamous report by the U.S. Department of Homeland Security, economic alienation increases an individual's susceptibility to xenophobic ideas — ideas like "global Jewry has orchestrated the economy's downfall" or "the reason I don't have a job is because of Muslim immigrants." The eurozone crisis, where immigrant-heavy Southern European nations like Greece and Italy were seen as dragging down the viability of the euro, only further strengthened the idea that immigrants were the source of Europe's woes.

Neo-fascist political parties have embraced the resultant anger. The United Kingdom Independence Party (UKIP) has taken a vociferous anti-immigration stance following the influx of Bulgarian and Romanian immigrants to the U.K. following their homelands' entry into the European Union. UKIP leader Nigel Farage, who pals around with Holocaust deniers but blames rising anti-Semitism on Muslim immigration, has been quoted as saying he would feel uncomfortable if a Romanian family moved in next door to him. When asked the difference it would make if the family was German, he replied, "I think you know the difference. We want an immigration policy that is not just based on controlling not just quantity, but quality."

In Greece, the far-right (like, giving-Hitler-salutes-and-singing-Nazi-anthems-outside-parliament far-right) Golden Dawn Party has coupled violent rhetoric against Jews, Roma, gays and other minorities with "social action programs" for the economically disadvantaged — but only if they can prove Hellenic heritage. The party has organized Greek-only blood banks and food drives, popular in a nation where few social services remain intact, but anti-fascist watchdogs caution that they are part of a wider ethnocentrist campaign to prevent minorities from accessing government aid. That criticism hasn't halted its popularity: Golden Dawn won 9.4% of the vote in Greece's European parliamentary elections in May. Ilias Kasidiaris, the party's spokesman and a candidate for mayor of Athens, was backed by 16.1% of the electorate, despite bearing a swastika tattoo and assaulting two female politicians during a live television broadcast. He's now a member of Greece's parliament.

But the far-right movement most likely to benefit from Wednesday's terrorist attack in Paris, however, is France's own National Front, the nation's third-largest political party and European fascism's Great White Hope. Led by Marine Le Pen, the charismatic daughter of party founder and probable Bond villain Jean-Marie Le Pen, National Front has become a formidable force in French national elections. In the 2012 presidential election, polls showed Marine Le Pen as a serious contender — she ended up finishing third, winning 17.9% of the vote, National Front''s best performance in history. In last year's European parliamentary elections, National Front won 26% of the vote and 24 of France's 74 parliamentary seats, making it the most widely supported party in France. It's the first time an anti-immigrant, anti-EU party has won a nationwide election in the European Union's history.

Far-right terrorism has blossomed in these conditions. After 9/11, the 2004 bombing of commuter trains in Madrid and the bombing of the London Underground in 2005, European powers focused much of their intelligence and law enforcement resources on combating the threat of domestic Islamic extremism. This myopic focus ignored the long-standing threat of homegrown far-right extremists, who have perpetrated an increasing number of hate crimes against Jews, Muslims, Roma and other minority groups, as well as terrorist actions of varying severity.

The most horrifying of these attacks was perpetrated in a single day of carnage by Norwegian far-right terrorist Anders Behring Breivik on July 22, 2011, who after bombing the government district in Oslo went on a shooting spree at a Labour Party youth camp on nearby Utøya Island, killing 77 and wounding 319 in the deadliest peacetime shooting in modern European history. Breivik's 1,518-page-long manifesto, 2083: A European Declaration of Independence, accused Norway's leaders of planning cultural genocide by allowing Muslims to continue immigrating to Scandinavia: "They are committing, or planning to commit, cultural destruction, of which deconstruction of the Norwegian ethnic group and deconstruction of Norwegian culture. This is the same as ethnic cleansing."

Breivik's "lone wolf" attack should have been a call to action for Europe's moderate-left majority to tackle the issue of far-right terrorism once and for all, but the crackdown never came. Instead, Europe has doubled down on questionably effective anti-terror policies targeting Islamist extremists, which have done little but made European Muslims more insular and vulnerable to extremism than ever. The double-barreled ineptitude of Europe's anti-terror policies doesn't just fail to address homegrown radicalism, but exacerbates the very Islamist terrorism that it aims to eradicate.

The massacre of innocent journalists and cartoonists will only make things worse. It's a cliché to point out that terrorism is a self-defeating enterprise, more likely to damage one's cause than to aid it. But when Europe is on the precipice of returning to the monoculturalist institutional bigotry that crippled the continent for a generation in the 20th century, the murder of a room full of satirists will do nothing but harm Europe's Muslims even more than the rise of xenophobic political parties already has.

Just hours after the attack, National Front seems set to use the attack to further its anti-immigrant agenda. The party's treasurer, speaking ahead of a press conference by Marine Le Pen, said "Islam has a tendency to create fanatics more than any other religion. The facts on the ground prove this." Olivier Roy, a professor at the European University Institute in Florence who studies security issues and Islamist armed groups, told Al Jazeera that Wednesday's attack "reinforces the extreme right." Roy predicts that National Front won't join the growing chorus of French extremists who are calling for banning Islam in France — at least out loud — "because they have a shot at the government."

Strengthened hate crime laws, the creation of "exit programs" to safely help people leave far-right movements and smarter domestic intelligence gathering may be able to help treat the symptoms of Europe's ethnocentrism and its attendant Islamic extremism, but they won't cure the illness. The opportunistic language of Europe's political leaders on the issue of immigration plays directly into the hands of extremists. A willingness to meet the Islamic community in the middle to determine the cultural and religious minority's place in modern European culture won't prevent every terrorist attack.

But in France, where the body politic has flirted with handing the reigns of the nation to the embodiment of their darkest impulses, that willingness can return legitimacy to a nation that prides itself on "Liberté, Égalité, Fraternité."