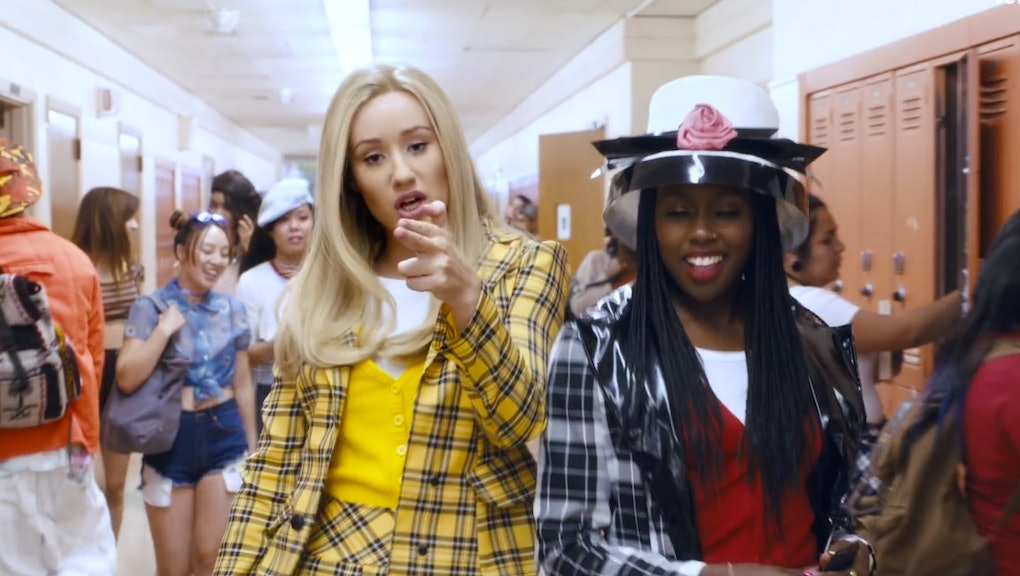 In just one year, Iggy Azalea has emerged from relative obscurity to become one of the most controversial hip-hop artists to ever grab the mic. She's faced tough criticism from the likes of Q-Tip, Azealia Banks and several others for culturally appropriating and refusing to acknowledge how she participates within a genre borne of the struggles of black and brown people that is inherently political.

And now, after her worst bout of criticism yet, she's proved that she missed the point entirely. During an interview this week with Vanity Fair, Azalea fired back at her critics, saying,

"Well, I never thought it was strange. If you go back to the Rolling Stones and Elvis Presley and Eminem — they've all basically done black music. I felt this wasn't that far from what we've seen in music history over and over again. .... They don't say that stuff about Macklemore. So, yes, I think it has 100,000 percent to do with the fact that I have a vagina."

This only makes things worse.

It isn't about sexism; it's about race. Azalea still seems to believe that the only reason people criticize her is because she's a white woman. Her classless response is to undermine another important cause in order to bolster her own brand.

The criticism of Azalea has always been about race. Many have accused her of forms of racial insensitivity — stealing beats for "Fancy" from uncredited black producers, using a "blaccent" and tucking away her history of racially problematic lyrics and remarks, all of which show a disrespect for the genre and the culture from which it emerged.

And she should learn more history before making these claims. Azalea defends herself by citing the Rolling Stones, Macklemore and especially Elvis Presley. She seems both unaware that they too have been criticized for appropriating the sounds and stylings of black artists and also that all of those artists have a much better track record of acknowledging the racial history of their genres than she. Because it's not about a white artist performing music pioneered by black artists, it's about whether or not they respectfully approach the culture and the people behind it. It's the difference between appropriating and appreciating: She does the former; the artists she cites all worked to do the latter.

For instance, as MusicREDEF points out, in the 2002 song "Without Me," Eminem pokes fun at his status as a pop culture provocateur, but also takes a moment to jab at his position in the industry: "No, I'm not the first king of controversy / I am the worst thing since Elvis Presley / To do black music so selfishly / And used it to get myself wealthy," he raps. "There's a concept that works / Twenty million other white rappers emerge."

And many other white rappers have indeed emerged, including Azalea's other cited defense, Macklemore.

But Macklemore gets it — and he makes it clear that this isn't about gender. He's faced criticism similar to what Azalea's now contending with. But where she dismisses hip-hop's input, Macklemore listens. Even before he rose to mainstream success, Macklemore used his music to discuss white privilege. He's also participated in recent protests and has called upon white people to reflect on how they approach black culture and racial justice issues.

In a recent interview with Hot 97, Macklemore discussed how his position as a white rapper affords him access to the audiences and notoriety in ways that would be considerably more difficult for black artists.

"Why can I cuss on a record, have a parental advisory sticker on the cover of my album, yet parents are still like, 'You're the only rap I let my kids listen to,'" he said. "If I [were] black, what would my drug addiction look like? It would be twisted into something else versus maybe, 'Get back on your feet!' The privilege that exists in the music industry is just a greater symptom of the privilege that exists in America. There's no difference."

Macklemore also underscored that no one can disregard hip-hop's social and political context within the black community.

"This is not my culture to begin with," he said. "As much as I have honed my craft ... I do believe that I need to know my place."

Unfortunately, that's not an approach Azalea takes. When Vanity Fair asked her an unrelated question about how she feels about twerking, she proved the depth of her insensitivity, "Sometimes things become part of pop culture, but they run their course. I think it's time for it to be over."

If ever there were a quote that proved her ignorance, it's this. Twerking is a dance move that's emerged from black communities, only to be taken, used and declared dead by white artists, even though they had no hand in creating the expression. That's a clear signal of appropriation. And it's inexcusable.

That's why people continue strongly criticizing Iggy Azalea: because she won't acknowledge her place in hip-hop or accept accountability for how she rips off black culture for her own gain. It's not about her being a woman. It's about race, power and privilege. And she needs to accept that before it will get better.