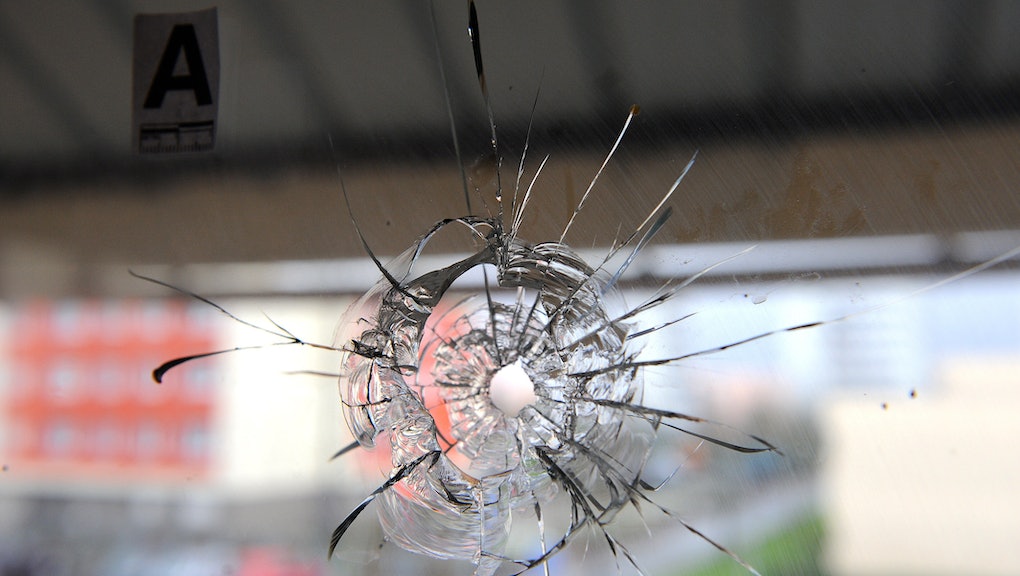 While some French citizens flooded the streets in a sign of solidarity with Charlie Hebdo on Wednesday night, others chose the sadly predictable route of taking out their anger on innocent Muslims.

The first attack happened early Thursday morning in the eastern city of Villefranche-sur-Saône. Local newspaper Le Progres reports that an explosion went off near a mosque and in front of a restaurant operated by "people close to the mosque." No injures were reported.

"The window was [blown] out by an explosion in the night," a source told reporters, adding that the "criminal" act also targeted the kebab shop adjacent to the mosque. "I'm worried that this is tied to the dramatic events of Wednesday," Villefranche-sur-Saône Mayor Bernard Perrut told Le Progres.

In Le Mans, a city two hours southwest of Paris, several plaster grenades were thrown into the courtyard of a mosque. One exploded, but no injuries were reported.

French newspaper Le Maine Libre reports that the attack occurred around 12:30 a.m. local time Thursday. Police say a bullet pierced a window in the mosque, and no suspects were arrested.

Another act of terrorism, the same vile response. Only lunatics would react to extremist violence by issuing more violence toward unrelated Muslims. Their targets are not connected to the actions of the Charlie Hebdo assassins in the slightest. While most French citizens and people around the world displayed solidarity with the victims, these people decided to react stupidly.

Compare the situation in France to this incident in Canada: In October, a mosque was spray-painted with the words "go home" in the small town of Cold Lake. Instead of cowering with fear, residents cleaned up the mosque and replaced the broken glass.

Last month, after an Islamic State-inspired terrorist held several people hostage in a Sydney cafe, Australians banded together. They used the hashtag #IllRideWithYou, showing solidarity with Muslims who were scared of violent retaliation on public transportation.

These heartwarming responses serve as perfect reminder to countries where acts of terrorism breed Islamophobia. In France, the far-right National Front party used the Charlie Hebdo attack to further dig into its anti-immigrant agenda, stating that Islam has a "tendency to create fanatics."

In response, the French People of Color organization, which is pro-Muslim, loudly condemned the attacks: "We denounce the attack and the instrumentalization of the attack [by] the jackals that want to use this incident to start a witch hunt against Muslims," said Youssef Boussoumah, an organizer with the group. "This enables people who attack Muslims."

After a massacre like Wednesday's, the last thing a country needs is even more violence inspired by xenophobia and Islamophobia. Instead of choosing suspicion and hate, people need to rally together to fight the real common enemy: extremists.