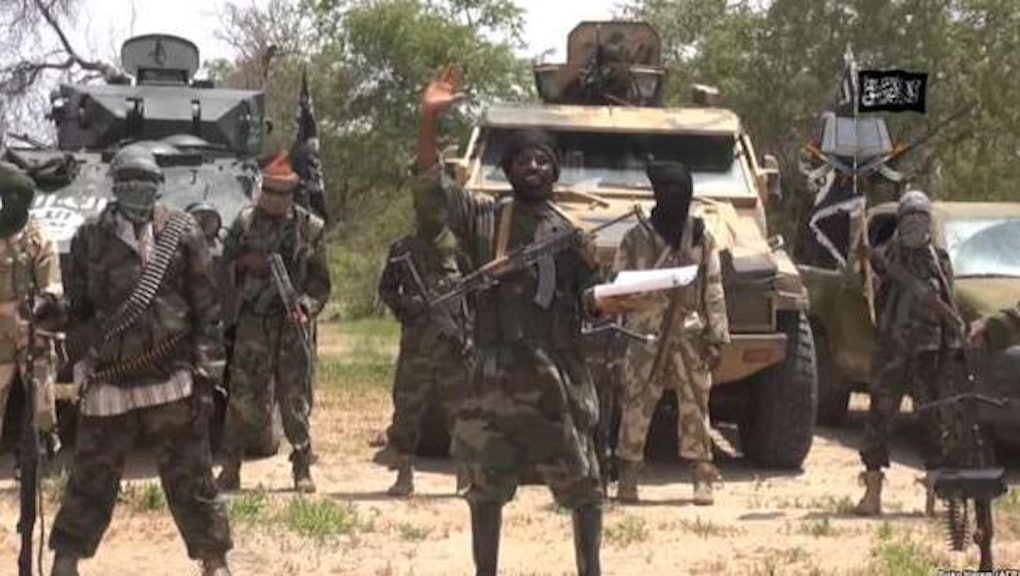 The Massive Terrorist Attacks Hardly Anyone Is Talking About

More than 2,000 people are missing. Towns are practically wiped off the map. People's homes have been torched.

That isn't a scene from a horror movie, it's the aftermath of a brutal terrorist attack in Nigeria. And few people are talking about it. The culprits: Boko Haram, an extremist Islamic group that aims to convert Nigeria into an Islamist theocracy.

According to NBC News, 2,000 people from the town of Baga in eastern Nigeria are unaccounted for after the terrorists burned down as many as 20 villages in the region. "These towns are just gone, burned down," Ahmed Zanna, a senator for the Borno state, told the outlet. "The whole area is covered in bodies."

The onslaught of deadly attacks started on Saturday when Boko Haram members overran a military base killing "an unknown number of people and seizing weapons and vehicles as soldiers fled," according to Zanna.

On Wednesday, Boko Haram continued its barbaric assault and practically destroyed Baga. The town has been described as "torched," with corpses strewn on the streets. A government official told the BBC it's now "virtually nonexistent."

The Borno state has been the hardest hit by the Boko Haram insurgency; the terrorist organization controls more than 70% of it. Due to the extreme danger to relief workers and journalists in the region, it's hard to gather information. Some reports speculate that 2,000 people were killed, but other reports put the number of dead in the hundreds, with others fleeing to neighboring towns.

Boko Haram continued its deadly offense on Thursday by setting up phony checkpoints, hiding in the bush and killing whoever was unfortunate enough to come their way. Residents say the town smells of rotting corpses and people can't bury the bodies because of the danger posed by the militants.

The attacks have only ignited further tension between senators and the government, which stands accused by local officials of not doing enough to eliminate Boko Haram. Nigerian President Goodluck Jonathan announced Thursday his bid for reelection in next month's vote, but his inability to arm the Nigerian army has come under scrutiny.

The heavily armed Boko Haram possesses rocket-propelled grenades, heavy machinery and tanks, while the Nigerian army struggles to even buy bullets, Gulf News reports. There are additional fears that Boko Haram has designs to attack the upcoming national election on Valentine's Day.

Since 2009, Boko Haram has kidnapped and slaughtered thousands, with the ultimate goal of supplanting the elected government and ruling all of Nigeria under strict Islamic law. The group garnered attention in May when it kidnapped hundreds of school girls, who have reportedly been forced to become "war brides" for the terrorist group's fighters. The hashtag #BringBackOurGirls became a worldwide phenomenon as a result of the mass kidnapping, prompting high-profile people like first lady Michelle Obama to express support for their safe return.

Although many of the girls have yet to be found, the global outrage over the mass disappearance all but disappeared a few months later. A search on social media analytics website Topsy shows that the hashtag garnered 51,000 tweets within the past month (as opposed to millions in May); if the topic is out of sight, it's out of mind. Maybe it needs another hashtag to capture people's attention, because thousands of bodies aren't doing it.