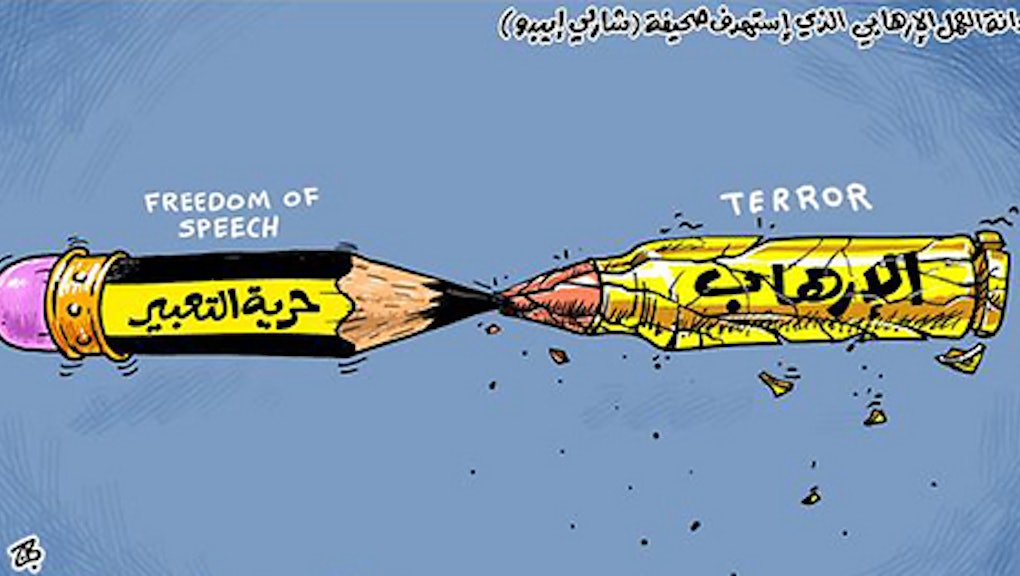 Here's How Arab Papers Reacted to the 'Charlie Hebdo' Massacre

If you thought the Arab world celebrated the attack on Charlie Hebdo as a blow against blasphemers, some Arab-language newspapers tell a different story.

Many newspapers across the Arab world have published cartoons expressing solidarity and support with the French satirical newspaper, much those published by Western cartoonists just hours after the attack.

But cartoonists find themselves in a difficult position: Despite the alleged wave of democratization that swept the region during the Arab Spring, free expression is still very much in danger across the region.

"Nearly four years later, many people are still watching their step," Israel's YNet newspaper writes. "Authoritarian rule has returned to many Arab countries while the rise of Islamic State militants who have seized large areas of Iraq and Syria also poses dangers to anyone who dares to debate religion."

Below is a collection of cartoons gathered from across the region.

These two cartoons are from the An Nahar newspaper, with the first one reading "But ... he called me a terrorist."

The second one reads: "This is how we avenge the cartoonists' killer."

The Al Akhbar newspaper, which some view as pro-Hezbollah, printed the following with the Arabic reading "freedom up in the air."

A Lebanese cartoonist described the situation "easier but far from ideal," following the Arab Spring since some saw that as the beginning toward freedom of speech.

"In support with Charlie Hebdo," it says on top with the hashtag #JeSuisCharlie.

In the other cartoon, Makhlouf drew "himself holding up a pencil in the face of an assailant wearing a balaclava, with almost alien-like eyes, as he points a gun at him," the outlet writes. The Arabic again says "In support of Charlie Hebdo."