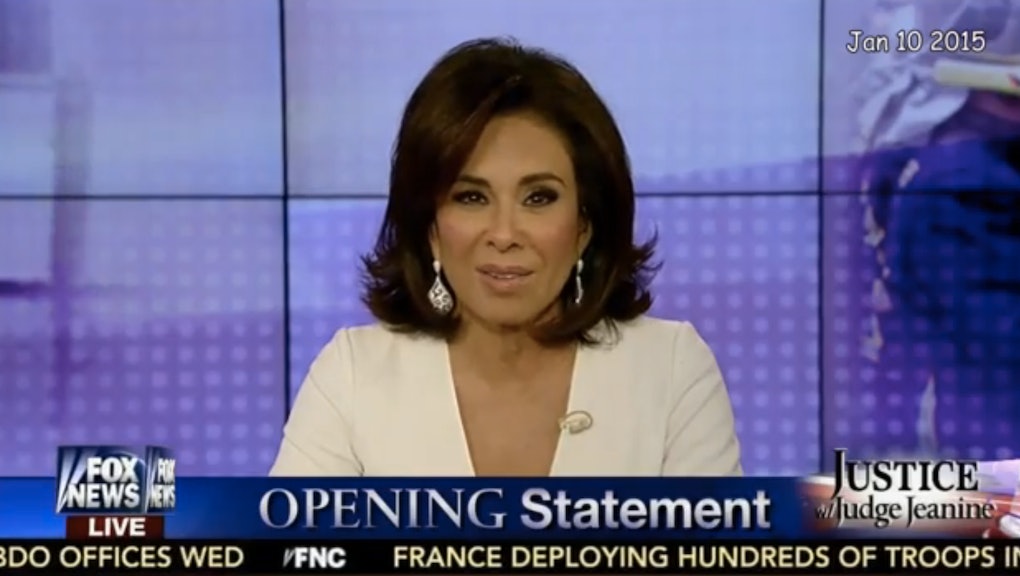 If you didn't think Fox News could turn up the crazy anymore, meet host Jeanine Pirro. The Ann Taylor-clad freedom fighter was in fiery form Saturday night on Justice with Judge Jeanine, ranting about everything from the Islamic State group to accusing President Barack Obama of placing this country under Sharia.

Just because Pirro is no dummy — she's a former New York state prosecutor and judge — doesn't immunize her from the cloud of xenophobic insanity permeating the network's studios: "You're in danger, I'm in danger," Pirro exclaimed, ratcheting up the Fox News' paranoia levels to epic highs. "We're at war."

In Pirro's eyes, the only way to stamp out the the jihadists is to arm "to the teeth" other Muslims and "let them do the jobs" while we "look the other way." She continues, stating that the U.S. to stop sending money to "Arab countries" that don't support "this mission."

Wait, what? The same Pakistan that's a U.S. ally, fighting its own Islamic extremists with much bloodier consequences than we are? But Pirro is never one to let facts cloud an argument, as her exchange with "terrorism expert" Steven Emerson that ended with him declaring that the city of Birmingham, England, had been overtaken by Muslim extremists.

"Force Arab nations to choose," she declares. "They're either with us or against us. And stop with this nuclear negotiation nonsense. They don't operate the way we do. You can't negotiate, you can't mediate and you can't bargain. You can't even reason with these people."

At seven minutes, it was a long rant. The weirdest part? Pirro's assertion that Egypt's new government has eliminated Islamist extremism and become a paradise of free thought.

"The news that radical Islam has been eradicated from Egypt would, I imagine, come as a surprise to Egyptians, including [Abdel-Fattah] el-Sissi himself," writes Vox's Amanda Taub, pointing out the country's recent massacre of nearly 1,000 demonstrators.

"As this Islamic cancer metastisizes throughout the world, Boko Haram in Nigeria, al-Shabab in Somalia, Ansar al-Sharia in Libya, al-Qaida, ISIS, and as it goes through Europe it is headed our way," Pirro snarls at the end.

If this is how Pirro reacts to impossible threats, we can only imagine how she treats the waiter who brings her the wrong glass of wine.