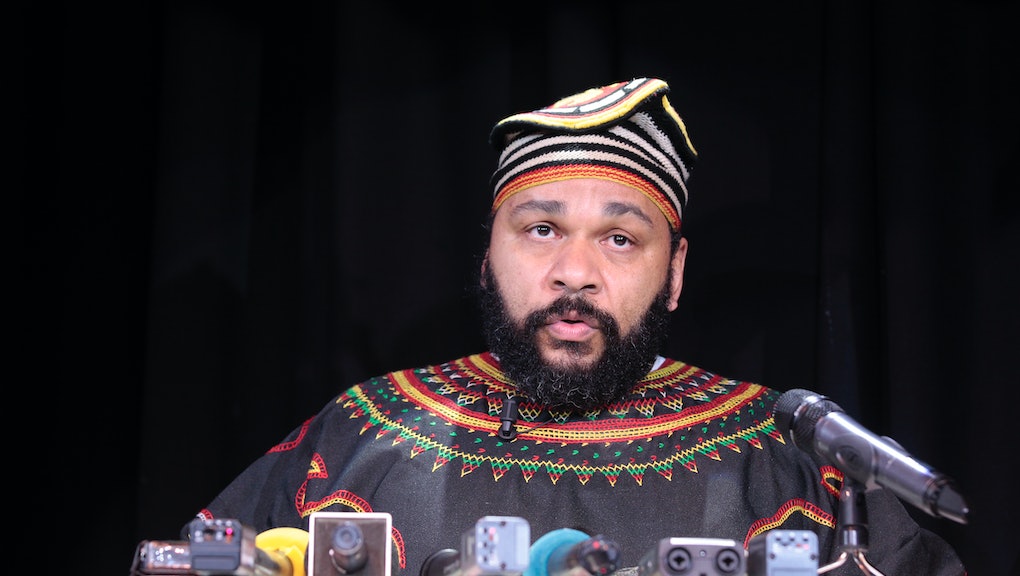 Just a few days after millions of activists and dozens of world leaders banded together in defense of free speech in the wake of the Charlie Hebdo massacre, French authorities are redefining how "free" free speech actually is.

French authorities have reportedly arrested comedian Dieudonné M'bala M'bala for being an "apologist of terrorism," the Guardian reports. Wednesday's arrest is likely the highest-profile figure to be a targeted in France's "crack down on hate speech, anti-Semitism and glorifying terrorism." Prosecutors announced Wednesday that 54 people had been arrested for those offenses since the Jan. 7 shooting at the Paris newspaper that killed 12 people.

Dieudonné's lawyer told French-languange news channel BFM-TV that his client's comment was blown "completely out of proportion." If convicted, the comedian, who goes by the stage name Dieudonné, could be fined $6,000 and face up to seven years in jail. The move highlights a dangerous double standard underpinning French cries of free speech and free expression in the wake of the Charlie Hebdo attack.

The background: Dieudonné posted a message on Facebook on Sunday following the massive unity rally in Paris, supposedly sympathizing with Amédy Coulibaly, the gunman responsible for Friday's deadly attack on a Paris kosher market. "Tonight, as far as I'm concerned, I feel like Charlie Coulibaly," he wrote.

The "Charlie Coulibaly" phrase mixes the rallying crying "Je suis Charlie" and the last name of the gunman. The Facebook post has since been deleted.

A high-ranking French politician lashed out at Dieudonné's comment, calling it "contemptible," which led the controversial comedian to further explain his comment in an open letter.

According to France 24, he accused the French government for trying to kill him "by any means."

"For a year, I have been treated like public enemy No. 1, while I seek to do nothing but make people laugh," he said, arguing that his brand of offensive humor is the same kind of free speech that Charlie Hebdo sought to embody. "When I speak ... you look for a pretext to ban me. You consider me an Amédy Coulibaly, while I'm no different from Charlie."

Why it matters: There's a legal precedent behind Dieudonné's arrest: As the Associated Press reports, "Like many European countries, France has strong laws against hate speech, especially anti-Semitism in the wake of the Holocaust. The Justice Ministry sent a letter to all French prosecutors and judges urging more aggressive tactics against racist or anti-Semitic speech or acts."

Dieudonné has had numerous run-ins with the law because of his anti-Semitic material, which comes with a focus on mocking Judaism. Over the years, he's been charged at least 38 times for violating the country's anti-hate laws, towns have banned him from performing and political officials have lambasted his Holocaust-denier views for inciting hatred. Those muzzles have barely made a dent in his career and highlights the country's struggle with allowing freedom of speech and banning, in its opinion, vitriolic views.

Critics say the government "risks overreacting and endangering basic freedoms as well as adding to his luster by making him into a martyr," according to the New York Times.

"A democracy does not back down from its fundamental freedoms, from freedom of expression," French Human Rights League Agnès Tricoire told France 24 after one of Dieudonné's previous conviction. "This astonishing decision sets a dangerous precedent. Who else is going to be banned for having a controversial point of view?"

"As France, its people and its government rallies for freedom of speech and the right to expression, the country is already facing its first test since the attack on the Charlie Hebdo offices," writes Mic's Tom McKay.

While the country has a ban on certain hate speech, considering the difficulty of to construing Dieudonné's recent Facebook post as "hate speech," it might be time for the government to re-evaluate its own rules and really examine what "freedom" really means.

Due to an attribution error in the editing process, an earlier version of this article cited and linked to the Associated Press, but did not include quotes around the following: "Like many European countries, France has strong laws against hate speech, especially anti-Semitism in the wake of the Holocaust. The Justice Ministry sent a letter to all French prosecutors and judges urging more aggressive tactics against racist or anti-Semitic speech or acts." The story has been updated to fully attribute the AP's language.