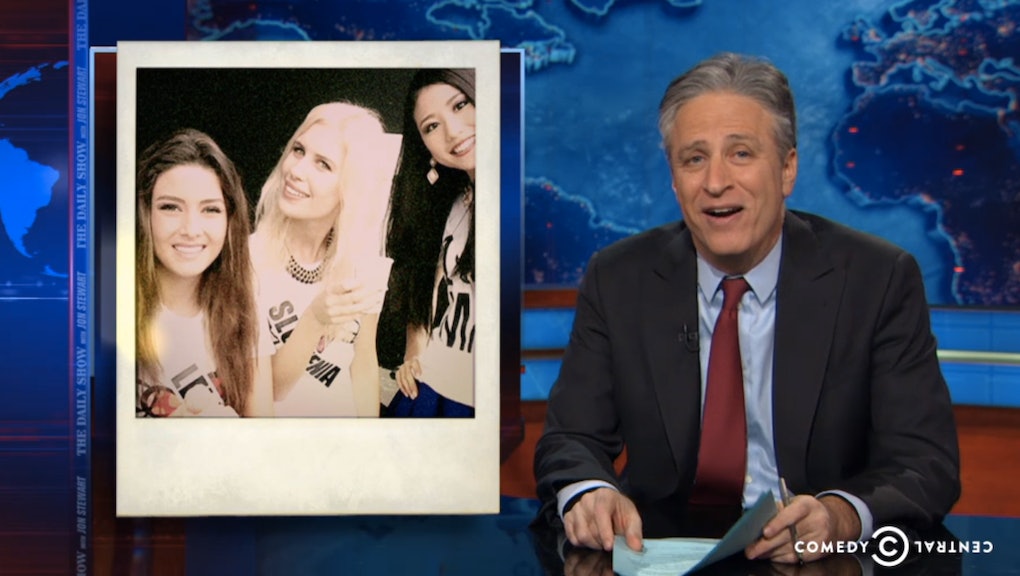 If there's one thing we've learned over the past few weeks, it's that the entire world is very sensitive about pictures.

On Monday's Daily Show, Jon Stewart jokingly introduced a new segment: "What Picture Is Upsetting the Middle East This Week?" Instead of discussing Charlie Hebdo's satirical cartoons, the segment focused on a selfie between Israel and Lebanon at the Miss Universe competition that apparently carries major political ramifications.

Miss Lebanon, Saly Greige, is being criticized at home for appearing in the same frame as the glowing representative of her country's No. 1 enemy, Israel. Greige declared her innocence, claiming she was "photobombed" by Israel.

"Does everything that happens between Middle East countries have to be a bombing?" Stewart says. "In the overall area of that photo, she's only taking up a very narrow strip at the edge. I mean what do you want to do? Push her back to, say, pre-1967 photo borders?"

Donald Trump, the pageant's owner, even condemned the international uproar, calling it "very sad." Stewart, in a rare turn, had to agree with Trump.

After all, it's just a competition, he says: "It's the one chance in the whole year when all nations can put aside their differences, come together in Miami and as one treat women like expensive food instead human beings."