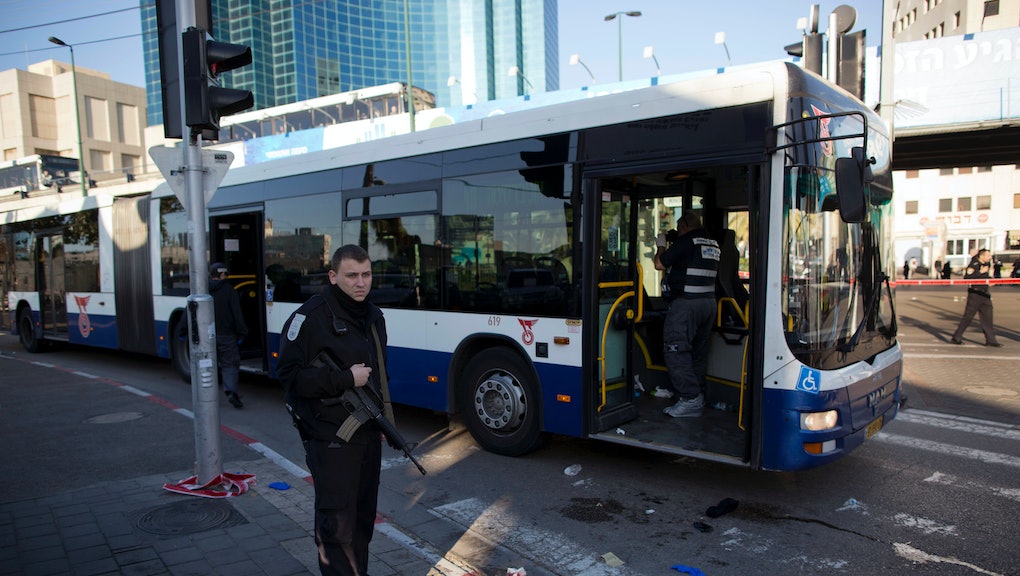 A Palestinian man went on a stabbing rampage on a bus in Tel Aviv on Wednesday morning, injuring more than a dozen people, with six critically injured, in an incident that's being labeled as a terrorist attack by Israeli police.

Authorities say the 23-year-old man was shot by the police after fleeing the bus, and he's now in custody. The man, identified as Hamza Mohammed Hasan Matrouk by Israeli newspaper Haaretz, told police he was motivated by Israel's recent string of skirmishes, including last summer's war in the Gaza Strip.

The reaction has been horrific. Hamas spokesman Izzat al-Risheq called the attack a "heroic stabbing" and claims it was a "natural response to the terrorist occupation crimes against our people."

Palestine supporters have been spreading that vitriol online, mocking the attack using the hashtag #JeSuisCouteau ("I am the knife"). First spotted on Vocativ, the hashtag trivializes the rallying cry "Je Suis Charlie" that millions around the world used to support the satirical newspaper Charlie Hebdo after its office was attacked by Islamic extremists.

Supporters of the Tel Aviv attack are tweeting drawings of the bloody knives and are encouraging more attacks against Israel. According to social media measuring service Topsy, the hashtag has been used nearly 4,000 times.

This one says, "10 stabs for those who don't pray for the prophet."

Tel Aviv police told reporters that Matrouk boarded the bus and started stabbing the driver and passengers. The victims were treated for injuries ranging from light to serious, and several people were treated for shock. "This is a grave terror attack," Tel Aviv police commander Bentzi Sau said at a press conference. This is the first attack in the bustling city since a police officer was stabbed to death in November, further igniting a recent wave of violence between Israel and Palestine.

Social media is used as a weapon of war more and more frequently. After last summer's military confrontation in Gaza that claimed the lives of nearly 2,200 Palestinians, Israelis who felt they were losing the public relations battle launched #IsraelUnderFire to bolster global support for the war.

But it's also important to note the popularity of hashtags that express solidarity or push for dialogue — initiatives like #JeSuisCharlie, #IfTheyGunnedMeDown and #IAmTrayvonMartin. If Twitter, Instagram and Facebook can be used as weapons of war, they can also be used to spread messages of peace.