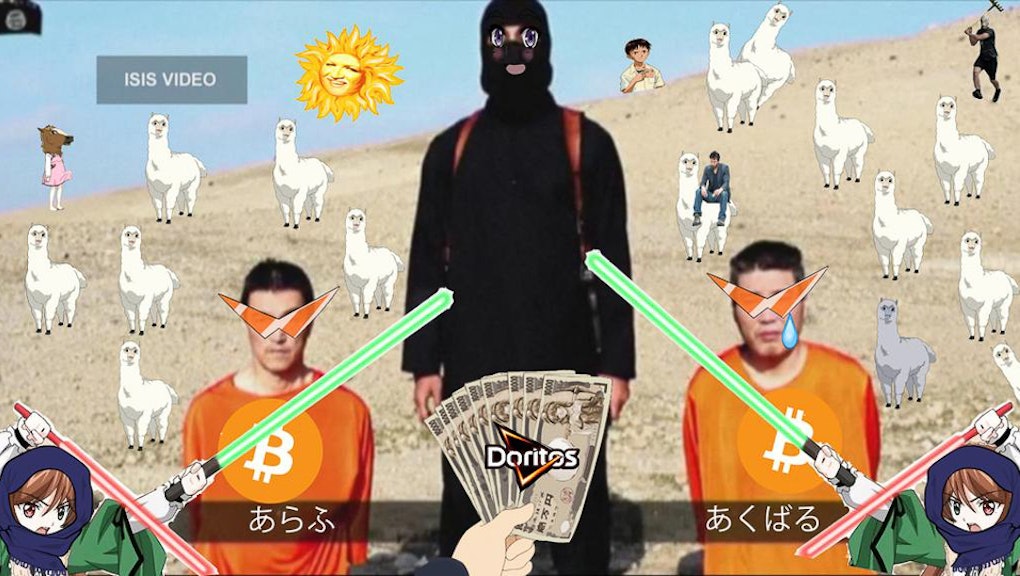 An Islamic State group militant draped in black released a video Tuesday announcing the capture of two Japanese hostages. He announced that two men, Kenji Goto and Haruna Yukawa, would be executed unless the Japanese government wired a $200 million ransom by Thursday.

As Americans well know, haunting images of a country's citizens held at gunpoint thousands of miles from home fosters a climate of fear and a thirst for vengeance, but the Japanese are reacting to the kidnappings in a different fashion: They're making memes. Pictures are popping up on social media with digitally altered images of the IS captors and hostages placed in silly situations or switched with characters from anime and sci-fi objects like light sabers.

Tens of thousands of tweets are using a hashtag that translates to "ISIS Crappy Collage Grand Prix," according to Vocativ. Basically, it's a Photoshop battle for bored, newshungry Japanese people.

Let's look at some of them:

The equally egregious selfie stick makes an appearance in this one:

The three men are reimagined as Minecraft characters:

And whatever the hell is going on here:

This seems wrong, right? Two lives are in grave danger at the hands of a blood-thirsty terrorist organization. Mocking them seems reckless, silly and extremely insensitive to some, but the Washington Post writes that by "mocking the extremists on the medium, they are taking back control."

It also addresses the theory floating around online that these hostage videos are digitally altered themselves. An analyst told Reuters that the video is "highly manipulated." The lighting behind the men converges in an "unusual and unnatural" way, suggesting that it was shot in front of a green screen.

Also, the Photoshopping is taking a page from IS supporters whose social media propaganda includes goofily edited images, like of the Capitol building flaming in an inferno. This time, it's the Japanese pop culture that's ideologically dominant and not IS.

Whatever is going on here, it's certain that everyone reacts differently.