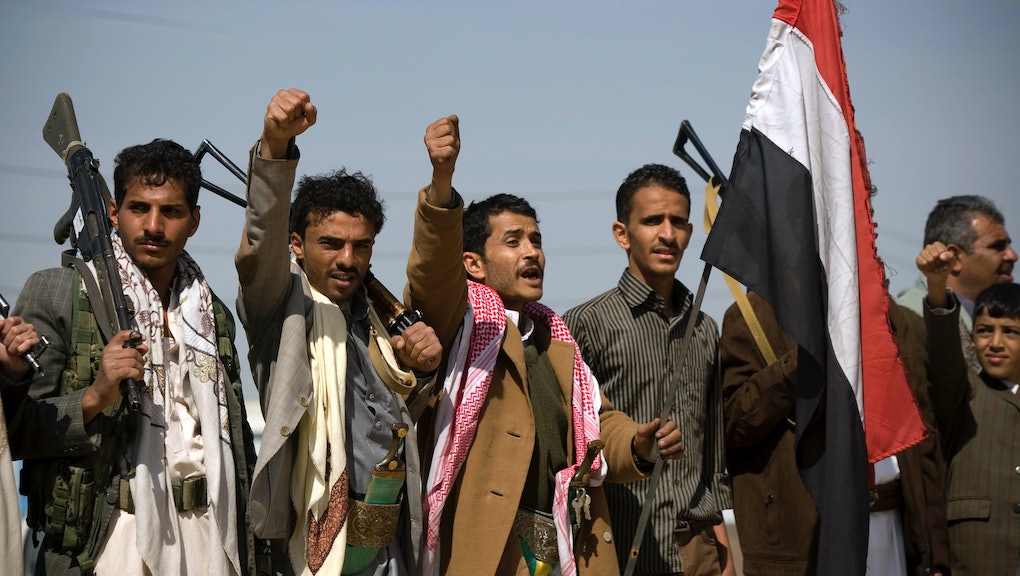 Yemeni President Abed Rabbo Mansour Hadi, along with his prime minister and cabinet, resigned Thursday following days of clashes with a rebel group known as the Houthis. While international observers attempt to parse the outcome of government's collapse, one thing is certain: The country is entering yet another period of turmoil in a seemingly endless cycle of political crises.

What just happened in Yemen?

The crisis began Saturday when Houthi gunmen kidnapped Hadi's chief of staff in protest of the country's proposed new constitution. Pressure increased Tuesday when the Houthis seized the presidential palace and surrounded his residence.

By Wednesday, Hadi arrived at a truce with the Houthis by agreeing to reopen debate on the country's new constitution if the militants would withdraw; however, Houthi militias remained deployed despite the truce and made further demands.

On Thursday, Prime Minister Khaled Bahah resigned first on behalf of the governing body, declaring: "We don't want to be a party to what is happening or will happen." Hadi followed suit, preferring to resign rather than accede to additional concessions.

Wait, back up, who are the Houthis?

The group began in the 1990s as the Believing Youth (a Zaydi Shia revivalist organization centered in the northern Yemeni province of Saada), which was founded by members of the al-Houthi, a family of religious scholars. Zaydism is a branch of Shia Islam to which most of Yemen's northern population belongs. The group promoted traditional Zaydi Islam in the face of growing influence from Sunni Wahhabi and Salafi proselytization. Though they have gone by different names over the years, the group's followers are collectively known as the Houthis, named for the group's founders.

The Houthis transformed from youth group to insurgency during the 2000s. Capitalizing on anti-American sentiment, Houthi activists openly challenged Yemen's former President Saleh over his collaboration with the United States in the global war on terror after 2001. (Though Saleh is Zaydi, he is known for his ability to forge partnerships with groups of any stripe to serve his own political interests.)

OK, got it. So what exactly do they want?

Essentially, they want to change the national constitution forged during the 2013-14 National Dialogue Conference.

The transition deal that saw to Saleh's resignation in 2011 (which was brokered by the United States, the U.N. and the Gulf Cooperation Council) required staging the NDC. Its aim was to bring together representatives from all major political factions in Yemen to agree on principles for a new constitution.

The conference concluded in January 2014, and its outcome called for reshaping Yemen into a federation of six federal districts. The Houthis rejected this plan on the grounds that the new borders unfairly isolated their newly cemented stronghold in Saada. During this time of instability, the Houthis took advantage of the central government's weakness to eliminate old enemies and forge new alliances.

Meanwhile, Saleh's resignation only paved the way for current-President Hadi, who also favors the constitution that the Houthis dispute.

And the outcome is the violence of the past week?

Sort of — this current conflict has been building for more than a year. In early 2014, the Houthis finally defeated the main Salafi stronghold in Saada that had long vexed their leaders. In the summer they scored a series of victories over tribal rivals led by the al-Ahmar family. The tribes commanded by the al-Ahmar are traditionally Zaydi, but the al-Ahmar have associated with the Islah party, which is politically inspired by the Sunni Muslim brotherhood but includes members from traditionally Sunni and Zaydi backgrounds. This led to media reports that misleadingly characterized the conflict as a simple Sunni-Shia dispute. The Houthis capped  their consolidation of power in the north by seizing a military base just north of Yemen's capital in July.

Meanwhile, the Houthis gained supporters beyond their traditional Zaydi base by employing populist rhetoric condemning corruption, foreign intervention, and the elimination of subsidies. These appeals attracted disillusioned youth activists who propelled the revolution in 2011 but felt betrayed by a political transition process they saw as only benefiting old-guard parties while rubber-stamping Hadi, Saleh's former vice president, in an uncontested presidential election. With their willingness to fight old-guard powers like the al-Ahmar, Saleh, and his opponent Islah, some hoped the Houthis represented a fresh new political alternative.

Emboldened by military success and popular support, Houthi supporters set up protest camps in Sana'a in August demanding a number of concessions from Hadi, including the restoration of recently-cut fuel subsidies. When concessions weren't forthcoming, Houthi militias occupied the defense ministry, army headquarters, parliament building, and state television building. Now under serious pressure, Hadi signed in September a deal granting the Houthis a say in the selection of a new prime minister and cabinet.

Despite the agreement, Houthi forces remained in the capital and set up checkpoints throughout the city. After months of an uneasy coexistence in which the sitting government kept its positions while the Houthis ran security in the streets, the Houthis were perfectly positioned to ratchet up pressure against the Hadi regime as they have the last few days.

Got it. So what happens now?

Because Hadi has now also resigned, the speaker of Parliament should assume the presidency, according to Yemeni law. That would be Yahia al-Rai (who, in a twist of fate, is an old ally of former President Saleh).

For some, this outcome might seem planned. Since their effortless march on Sanaa in August, the Houthis have been accused of collaborating with Saleh, their former adversary, in an effort to undermine Hadi, their mutual enemy. Recently leaked audio recordings allegedly prove such coordination took place. If authentic, they could undermine the Houthis' claim that they will bring Yemen the fresh political change its Arab Spring protesters sought in 2011.

The Houthis, however, seem ready to circumvent law and assume power themselves. The latest reports indicate that they intend to set up a presidential council of Houthis, other politicians and military officers. Hadi's resignation may put the Houthis in a tight bind; they previously seemed to prefer pressuring the government to extract concessions without actually unseating it. If they assume full control, it will be harder to generate popular support as they have before by criticizing corruption and unpopular policies. If they assume power, they will be held responsible for corruption and failed political initiatives instead.

What does this mean for the U.S.?

For the United States, Hadi's resignation could mean losing a key ally in combating al-Qaida in the Arabian Peninsula.

AQAP is widely considered the most dangerous of al-Qaida's active branches. The group sponsored both the attempted Christmas Day bombing over Detroit in 2009 and the attempted parcel bomb plot in 2011. They were also behind the attacks on France's Charlie Hebdo offices earlier this month.

Al-Qaida undoubtedly gains from this destabilization of the Yemeni government. In 2011, the last time the Sanaa was thrown into crisis, AQAP seized a number of towns throughout Yemen's southern provinces, including a provincial capital. This self-declared emirate, ruled by AQAP's alter-ego Ansar al-Sharia, lasted for over a year before local militias and a U.S.-supported Yemeni military campaign forced them into hiding.

Yup! But wait, there's more: The United States has invested hundreds of millions of dollars in training and equipping Yemeni counterterrorism forces since 9/11, and Hadi permitted the U.S. to continue its targeted airstrike campaign started under Saleh. While the Houthis are staunchly anti-AQAP and initiated an aggressive campaign against AQAP strongholds in 2014, they are also opposed to American intervention in their country's affairs. This means the United States faces an uphill battle if it wishes to get permission from a Houthi government to conduct further counterterrorism operations against AQAP in Yemen.

Although the Houthis have not specifically targeted Americans, their slogan ("God is great, death to America, death to Israel, damn the Jews, victory for Islam") pretty much captures their sentiment toward cooperating with the U.S.

And if that weren't enough, there's also Iran. Though its affiliation with Yemen has been dismissed in the past, American officials now believe that the Houthis have received "at least limited material support" from Iran. Then again, Michael Vickers, a senior intelligence official, recently insinuated that the U.S. may already have an intelligence relationship with the Houthis. As of now, the alleged link between the Houthis and Iran seems to be a bigger anxiety for Saudi Arabia, whose influence over Yemeni politics has diminished in recent years, and which is going through a government transition of its own following the death of King Abdullah on Thursday.

How about for Yemenis?

Southern Yemenis, who have long resented their marginalization by the central government of Sanaa, may seize on the current upheaval to reassert their effort to secede from the north. North Yemen and South Yemen were two separate countries until unification in 1990. Southerners attempted secession again in 1994, but failed to drive out Saleh. A weak government in Sanaa presents a fortuitous opportunity for southerners to reinvigorate their movement, which is still very much alive.

Anything else I should know?

Beyond the headline-grabbing gains for AQAP, the government collapse also signals the death of the "Yemen model," a transition success story promoted by President Barack Obama at the 2012 G-8 summit as a framework for solving the crisis in Syria. Even then, critics panned Obama's rosy view of Yemen's "successful" political development, but now the administration really has no ground to stand on. Despite years of diplomacy and billions of dollars, Yemen is still fractious and remains a safe haven for terrorists.

Not only has the Yemeni government collapsed, but so has a major pillar of America's foreign policy "success" in the Middle East. Time will tell how Yemen's political crisis will shake out, but the results certainly won't just affect Yemenis.