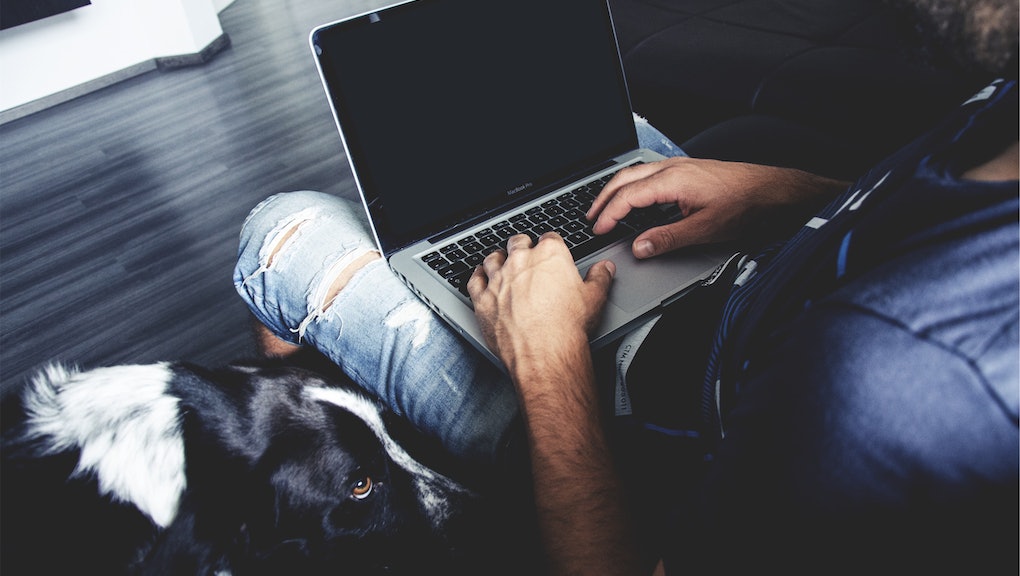 Back in August 2010, Lukas was trying out Tumblr for the first time and wasn't quite sure how it worked. His activity on the site consisted mainly of posting photos and writing sporadic stories about himself, musing on his life.

Then one day, he decided to click on a comment, to investigate the writer's profile. He began commenting back. It only took a few days of this back and forth before the interactions turned into Skype conversations, and then texting and calling.

"Before I knew it, we were talking quite often and she was good at giving advice, and for some reason (baffling as it still is to me), she put up with my idiocy," Lukas told Mic.

What started as a few innocuous comments on a social media site quickly turned into a real, honest-to-God relationship. Lukas' story and the many more like his are proof that online dating sites aren't the only place to meet a partner these days — social media itself can be too. In fact, a 2015 study of couples who married between 2005 and 2012 found that almost 21% who met online actually met through social media. Here's why we shouldn't be so surprised.

Your common interests are clear: How can sites like Facebook or Tumblr bring two people together romantically? It might have something to do with commonalities. A 2012 University of Chicago study, using survey data commissioned by eHarmony, found that those couples who met online were more likely to have happier, more satisfying relationship compared to those who met through more traditional means.

Interestingly, the online couples weren't limited to dating sites like eHarmony and OkCupid; more than 50% met elsewhere on the Internet, including 20% on social media sites.

Why did the online couples fare better? The study's authors suggest that people who seek each other out via the Web are better suited for one another. Online dating not only allows for a greater pool of potential partners, but also allows people to connect up front over shared interests and clearly defined relationship goals, "permitt[ing] these individuals to be more selective in identifying a compatible partner."

One particularly apt example? Laurie Davis and Thomas Harry Edwards Jr., two dating coaches who connected after Laurie searched #dating on Twitter. "I pulled up his stream and saw he was also a dating coach," she told People. "I thought the snapshot of his life from his Twitter profile was amazing and I knew I needed to know this guy."

And it's not just written mediums like Twitter that offer the chance to connect over common interests. Cory and Bethany connected over a shared appreciation for photography. The pair, featured by the Today Show last October, met by following each other on Instagram. A photographer herself, Bethany told Brides that she initially admired Cory's work on Instagram, following him then connecting with him on Twitter. Now, they're married.

Elizabeth Wisdom and Denis Lafargue formed a similar connection over Instagram in 2013, after Denis commented in appreciation over Elizabeth's photos. The one comment led to a real relationship, as Denis wrote later (in an Instagram caption, of course): "Who knew I'd fall so hard for a girl that I barely knew anything about from @Instagram! And that she would be brave enough to come visit some strange guy in New Orleans (7 hours away) after only talking to him for a few short weeks, AND that within 9 months of dating we would be engaged!"

You get personal and honest fast: Online dating sites offer various platforms for chatting. But, as the University of Chicago study also suggests, the possibility for relative anonymity on social media may prompt people to reveal more personal information. "Laboratory research has shown that self-disclosures and affiliation are generally greater when strangers first meet online rather than face-to-face," the authors note.

Laura from Washington, D.C., met her partner using Twitter. Laura, like Lukas, got to know her now-S.O. through short, focused bursts of information. One of their first interactions seemed rather innocuous: He asked a question about films, and she answered. They struck up a friendship.

"We became friends over Twitter, usually interacting every day in some way," she told Mic. "He became my favorite person on Twitter. Then I developed a huge crush on him (not knowing what he looked like or what his relationship status was, etc.). I knew he was about my age and also lived in D.C., but that's about it."

The initial communication was brief, but perhaps that's the point: The communication over social media tends to be more specific to the people, rather than the traditional "getting to know you" to-ing and fro-ing.

Social media lets a connection flourish over time: Social media, while it can cut through long distances and establish quick connections, doesn't necessarily break down all barriers, such as the universal relationship stumbling block called timing. But it does allow for people to keep up with each other's lives and follow each other while the timing isn't right... until, perhaps, it is.

"John was actually the one who first followed me!" Anthony told Mic, recounting his initial connection with his now-boyfriend. "I say that with a little surprise, because in the early part of our relationship, I was always the one who was doing the chasing.

Romance wasn't initially in the cards, as Anthony explains: "We flirted online, but he had a serious boyfriend when we first started talking, and then he was single when I had a serious boyfriend. But actually, we ended up working together at [Newsweek], where he was a fashion reporter and I was on social media."

Stories like Anthony's are becoming increasingly common, perhaps because social media is now an ingrained part of our culture. It's not weird at all to only meet your S.O. once you've connected online first. Plus the randomness of Tinder and the stilted TMI of OkCupid might actually be remedied on social media sites.

So don't worry about paying for that Match.com subscription — your partner might already be out there, snapping the right photo or composing the perfect tweet that will catch your eye. Just don't be afraid to retweet them first.