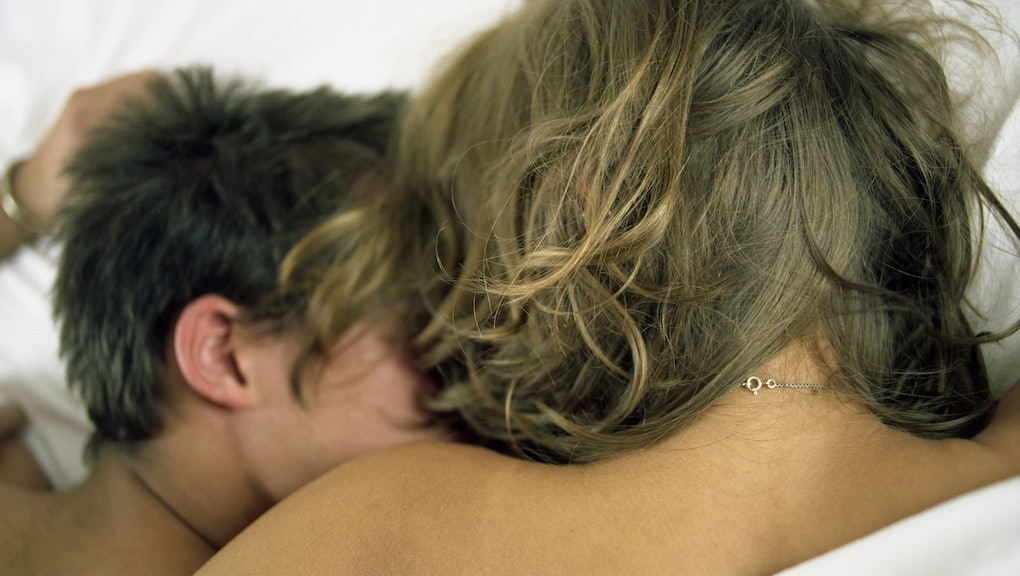 Losing your virginity — it's a seemingly simple concept that in fact glosses over a complicated reality.

Talk of "losing your virginity" (or simply our "first time") typically requires a rather restrictive definition of sex: penetrative sex, or "P-in-V," and usually heterosexual sex at that. That overly simplified view of things extends to what we think about virginity, a flawed term that boils down mostly to myth.

In reality, there isn't one clear definition of what it means to be a virgin, nor is there one for what "losing it" should be like. Yes, the lies we tell about virginity can be harmful to how we approach sex in general. But the variation in (and often anticlimactic nature of) our collective "first time" stories are a comforting reminder that sex isn't a singular experience. Nor is it something that has to be viewed through one restricted lens.

Sex, of course, is more complicated and nuanced than that, which is actually what makes it so wonderful. Here's what our "first times" end up really teaching us about sex.

Sex doesn't have one definition.

Chris, in his 30s: "'The first time' — What is that? Is it the first time you get gropey with someone's junk? The first time you experience an orgasm as a direct result of someone else's activity? Or is it, as many people believe, about penetration? The question is even more difficult when it comes to same-sex activities. Many gay men never indulge in penetrative sex; does this mean they die as virgins? And despite the hype, very few lesbian encounters entail someone being 'the man' and using a strap-on. If it's all mouths and hands, are they even doing it?

Personally, I would find it almost impossible to point to an occasion and say, 'There, that was my first time.' It's not like some teen movie where the boy gets the girl at the end and suddenly he's done it, so roll credits — at least not for most people.

Many of my early experiences involved booze, which rarely sets things up to be great. I could have spent a long time thinking that it's mostly a bit rubbish, but when men are young they don't really need great sex to have a good time; as long as the standard improves over time, there is hope for the future."

Having sex isn't an accomplishment to check off a list.

Dean, in his 30s: "[My first] was with my then-girlfriend of seven months, and although we hadn't penciled in a date and time, we had spoken about it. Being a teenage male there were high expectations, especially as most of my mates were sexually active at the time — so I probably received an inflated or over-the-top version of what it would be like. Having said that, I was probably too nervous, as I had built it up so much. [I] didn't have expectations at the time, [I was] just happy to be doing it.

I can't really remember my exact feeling afterwards. If anything, it was relief. Being a teenage male, there was a bit of pressure to do it your first time, and most of my mates were vocal about their sexual activity. So to do it, however enjoyable it was at the time, there was always going to be a sense of accomplishment.

My view of sex changed — in my teenage years, it was built up as a sign of manhood and masculinity as well as being a massive accomplishment. But afterwards, it was more about having done it rather the act itself."

Your attitude to sex can change based on who you're with.

Erin, in her 20s: "[My first time] definitely wasn't planned. There was a lot of alcohol; I was 17 and fresh out of high school.  I didn't really know what to expect — at the time, I was very scared of my body, and the idea of other people seeing me was the most terrifying thing I could imagine. It felt more like I had gotten past something [afterward], like ripping off a Band-Aid really quickly so you don't have to think about it.

At the time I did it, it made me feel as if sex was not overly special, and any emotional reaction was just a part of being a 'crazy woman' who was in denial about what she was to people. This is definitely not a view that has stayed with me as an adult. I feel like my view of sex has been shaped by close connections with partners who actually care about the person lying next to them. It's not my proudest moment, but I don't feel the need to take it back.

I like to consider my first time as being with a completely different partner, Tim, who I met on my 18th birthday. Some may call it denial, but it was the first time I with someone who I connected with and who wanted to be around me. He was also my first sober experience."

Ella*, in her 20s: "[My first time] was a little comical. It wasn't romantic, or in any shape what you see in the movies. It was daytime, and we were watching Shawshank Redemption.

It was thrilling because it was kind of an adrenaline rush of new emotions and a new level of commitment being reached. I was young and silly, but careful. I had waited to make sure it wasn't just a fling but with someone who loved me. I owe my sense of self-worth and how comfortable I am in my own skin to starting young and having the knowledge to do it right. It made me who I am.

It actually changed my view on sex for the better. We rely on movies and TV and now the Internet to guide our way through these life events, and so much of it is falsified for advertising purposes or ratings. Not all first times are candlelight and rose petals. They can and should be reasonable acts of love, and if so can be an amazing experience. My first time will always be viewed as breaking the ice to a much bigger pond in a world of possibilities. I will always remember it with fondness. Needless to say, Shawshank Redemption used to be a sad story, [but] now it just makes me giggle!"

Sex can impact your life without totally changing your identity.

Rachel*, in her 30s: "We had talked about it a lot and what we might like or not like, probably as a consequence of being long distance. We were just looking for an opportunity alone when we were together. In the end, we went to a B&B! No one came in the end, but we did all the things we'd mutually fantasized about.

It was joyful! Exciting! Not disappointing, despite lack of orgasms — a good early lesson that sex is more than that.

It's the most grown-up thing you can do, make babies (or practice, at least). But it was just a new experience, rather than feeling like an identity change. I remember before I had a child, a friend said being pregnant is a lot like losing your virginity: You can't imagine what that will actually be like, no matter how much you think about, until you're just doing it and it just is. I'd never been pregnant at that point but I knew exactly what she meant — I remembered that feeling from the afternoon in the B&B. I've been pregnant a lot more recently than I had sex for the first time, but I think that friend was right on both counts: These life experiences, they just are."

Sex doesn't always have to be so serious.

Fiona, in her 30s: "My boyfriend's parents were away, and I think we both knew it was on the agenda. We were a bit drunk, and it was a long time ago, but I don't think it was anything 'unexpected.' It was exciting, and a bit scary.

But I was glad it happened as it did. I was with that boyfriend for around a year, so I'm glad my first time was with someone that I (thought I) loved, and that we had a relationship before and after it happened.

Still, sex to me was never really that big of a deal. It still isn't. I think virginity is built up a bit too much — by society and in people's minds. Having sex is a completely natural way of expressing both yourself, and how you feel about another person. I don't view sex as anything much more significant than kissing or other sexual acts. It's human nature."

You don't have to measure or tally sex for it to truly "count."

Tom, in his 20s: "Basically, um, I've no idea when my 'first time' was. I mean, I've definitely had sex (all the sex) but where the line crosses from what could be defined as actual sex and what might be euphemistically called 'heavy petting' (or maybe 'excessive foreplay'), I don't know. I don't really see my move from virgin to... whatever I am now (maximum stud?) as a distinct act. [It's] more a large collection of different acts that contribute to a whole paradigm shift.

I have to admit in view of my experiences, I don't see 'virginity' as a binary thing that you either have or don't have. It's more a large collection of little things that you slowly tick off over time (or all in one evening, depending on how loose you are, obviously). For example, I wasn't sure if I was any less a virgin when I'd brought my first girlfriend to orgasm by going down on her. I certainly felt like I was, but by certain standards I wasn't. My first experiences of penetration were fairly unsuccessful for both parties so I'd hate to point at them as some kind of magic moment where my virginity just evaporated. I didn't feel much different afterwards.

In my view, virginity isn't really something you 'lose' as it is something that you slowly wear away until it's just not there anymore. Like socks or something. It's not a big deal, really. And, to be honest, if you're with the right partner, your glut or surfeit of experience shouldn't matter to them or you."

* These names have been changed to allow subjects to speak freely on private matters. All interviews have been edited and condensed for clarity.