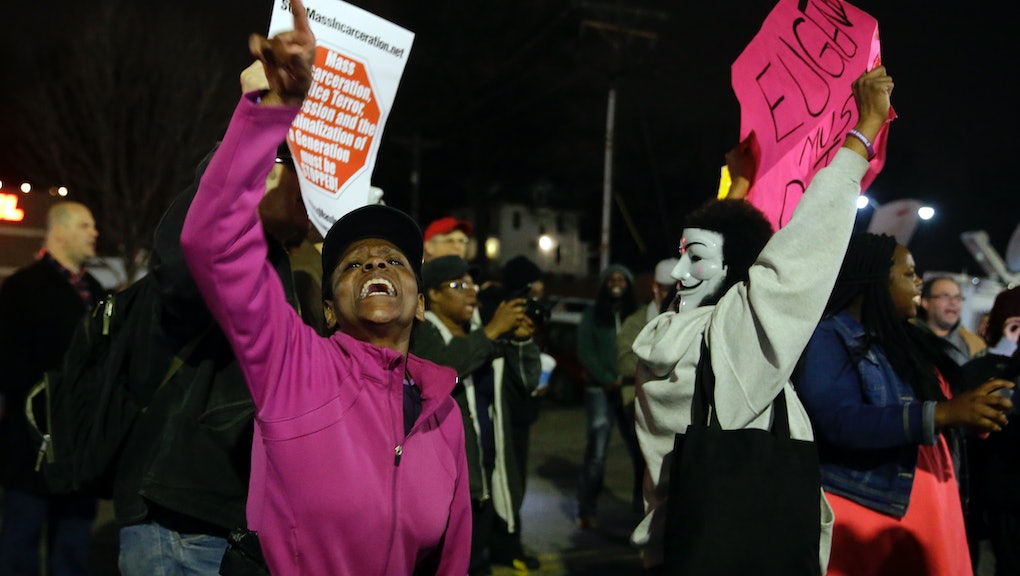 When police officers get shot, the world hears. The public empathizes. Certain police departments protest. The wrong people are sometimes blamed. The media covers the stories — often fueling the fire. And many are so focused on presumed threats to police security that they forget about the more insidious problems of structural racism and police brutality impacting the lives of the mostly black organizers working to bring about justice.

The Ferguson incident was compared to the fatal shooting of NYPD Officers Wenjian Liu and Rafael Ramos in Brooklyn. The double murder occurred in late December amid ongoing demonstrations in New York City, following a grand jury's decision to not bring criminal charges against police in the death of Staten Island man Eric Garner.

Like Mike Brown in Ferguson, Garner was a black person who died as a consequence of a police officer's use of force. Brown was shot; Garner was choked. Organizers in St. Louis, New York and throughout the country took to the streets in response to two of many blue-on-black deaths that occurred with impunity. In Ferguson, as in New York City, perpetrators' actions have been connected to the movement for black lives, which is spurring non-violent demonstrations across the country in response to police brutality cases and institutionalized anti-black racism.

Neither the unknkown perpetrator in Ferguson nor the lone New York shooter, Ismaaiyl Brinsleyn, who subsequently took his own life, has been linked to any protests or activist groups. Yet protesters were conveniently blamed for both shootings.

According to CBS News, Patrolmen's Benevolent Association President Patrick Lynch said, "Those that incited violence on the streets under the guise of protest that tried to tear down what New York City police officers did every day. We tried to warn it must not go on, it cannot be tolerated."

This tendency to blame black organizers for the tense relationships between police and civilians is not a new phenomenon.

"The myth of black violence is promoted every time people of color unite to critically challenge the state," Bryan Epps, Executive Director of The Malcolm X and Dr. Betty Shabazz Memorial and Educational Center, told Mic. "Media and some representatives in government have historically worked together to diffuse the achievements of peaceful social justice activists by calling individuals brutes, snipers and now thugs. This tradition of dismantling progressive action is a type of violence in itself."

Indeed, as Alternet's Terrell Jermaine Starr writes, "To accuse protesters of anti-police sentiment or blame them for the Ferguson police shootings is a deliberate distraction."

So why link disconnected events?

Financial incentives: There are obvious benefits to misleading the public about the principle reason for sustained protests, which is what these narratives do. Yes, protests are a First Amendment right and a sign of a thriving democracy; they also keep issues alive in the public consciousness. But protests cost law enforcement money and time. The state of Missouri, for example, reported having spent $11.7 million dollars on the National Guard and Highway Patrol by the end of 2014. Curbing protests might be an implausible rationale for saving money.

Racial discrimination has costs, too, often in the form of civil liberties and lives. The tremendous financial gains recorded by the municipality of Ferguson as a result of its over-policing and racially discriminatory policing practices, which has resulted in the removal of Ferguson City Manager John Shaw, is a striking example. Citing findings from the Department of Justice report, CBS News noted Ferguson Police Chief Jackson informed Shaw that 2012 municipal court revenue had exceeded $2 million.

Denying accountability: There are other, non-financial advantages for labeling a movement aimed at creating safer communities — one that also seeks to name and challenge white racial supremacy — antagonistic: Movements have the potential to transform present institutions and shift power.

History shows that unrest is never without cause. The Kerner Report, drafted by President Lyndon B. Johnson's National Advisory Commission on Civil Disorders in July 1967, in response to a period of civil unrest in black neighborhoods across the country reads:

"The police are not merely a 'spark' factor. To some Negroes police have come to symbolize white power, white racism and white repression. And the fact is that many police do reflect and express these white attitudes. The atmosphere of hostility and cynicism is reinforced by a widespread belief among Negroes in the existence of police brutality and in a 'double standard' of justice and protection — one for Negroes and one for whites."

The same commission that offered its damning prognosis of race relations, white racial supremacy and civilian-police interaction also set forth several recommendations it deemed useful for social change. Johnson rejected all of them.

The Ferguson police department and municipal government are a perfect example of transformative justice in action. The police chief has resigned, and more internal changes are being made. Yet the embattled department has scored a temporary public relations win as it moves attention from its internal malpractices to external threats. There's no better time than after an attack to revert the critic's gaze from the actions of a failed department to those of protestors.

But the message spread by national organizers is one of accountability, not retribution. This movement is focused on fixing broken systems, not excoriating bad police officers. And it is dishonest to insinuate that protests, which have sparked in response to grief, are attempting to encourage tragedy and violence.

The message spread by national organizers is one of accountability, not retribution.

The real problem, which was present in our past and remains today, is the perpetuation of a system of racial supremacy that continues to assert that some lives matter, deserve protection or are worth living, and others are not.

Those who are brave enough to offer critiques or take to the streets in pursuit of justice should not be labeled provocateurs or scapegoats for the exceptional actions of a few outside agitators. They should be heard.