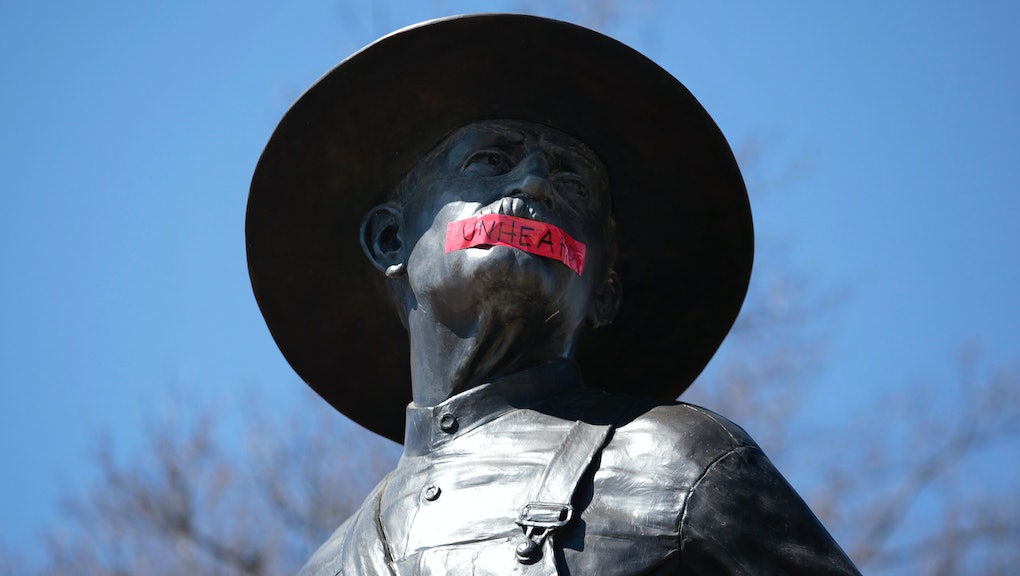 Why the N-Word Is Only Part of the SAE Problem

Trigger warning: Use of racist language often hurled at people who may not have the option of dodging such language when it is used.

I was 15 years old the first time I was called a "nigger" by a white person. The slur was fired from my Quaker school classmate's lips like a bullet, its ending an inflexible "er." It lacked the soft "ah" finish I was used to hearing from black people I knew and trusted, who used it as a sort of inner-circle colloquialism.

My classmate wanted to brawl. So, he hurled out "nigger" and "faggot" in front of another black student, who snickered, and a biracial teacher, who peered from the window, as if they were invitations to throw a punch. I wasn't scared. But we didn't fight.

The second time I was called a nigger was when a few non-white seminary classmates and I were walking back from a Christian education class convening in a mostly white section of Asbury Park, New Jersey.

Someone, or some group, sped by in a pickup truck and screamed, "Fried chicken-eaters!" And while there aren't two g's or a hard "er" in "fried chicken," I knew the translation of the unseen men's slur. We wanted to throw something at the truck, but there was nothing around to grab. In a fit of comedic impotence my friend and I yelled back, "Shut up, with your boiled chicken-eating ass!"

Our words emerged from anger at the history of racial antagonism against black people in the U.S. Our words were bullets aimed at cowards who didn't possess enough courage to say what they really thought — people hateful enough to hurt us, but who did so in hiding. Our words were born of rage, our only ammunition in that moment of racism.

But if black rage is a revolver, white supremacy is a sawed-off shotgun. Language can be violent. Nigger is a word that leaves the mouth like a buckshot, but the weapon is the real problem.

This is the point the exhaustive commentary surrounding the now expelled and penitent University of Oklahoma Sigma Alpha Epsilon students, who sang a racist chant on video, misses.

It hurts when white people call black people "nigger," but words aren't the biggest obstacle to surmounting racism in America. That honor belongs to the fact that society continues to validate a white sense of superiority, by reinforcing the idea that whites are more intelligent, less criminal and more employable than people of color.

Language has power, but so do the material advantages granted or denied on the basis of skin color. My classmate called me a bad word, yet society encouraged his sense of arrogance. He lives in a country where whiteness is thought to be synonymous with merit and achievement, despite the existence of structural impediments that frustrate black and brown peoples' success.

"Our words were bullets aimed at cowards who didn't possess enough courage to say what they really thought — people hateful enough to hurt us, but who did so in hiding."

Black people comprise 1 million of the roughly 2.3 million people in prison. They are more likely to be arrested than any other racial group in the U.S. and are incarcerated at nearly six times the rate of whites.

According to a 2014 U.S. Department of Education Office for Civil Rights brief, black students were suspended or expelled at three times the rate of white students and black girls were suspended at higher rates than all students, both girls and boys, during the 2011-2012 school year.

Given such a preponderance of evidence regarding racial inequality, it would be foolish to believe that black people are worse off than other racial and ethnic groups because we are lazier, more violent and less smart. Nevertheless, some people think racial inequality is a result of cultural differences and not structural conditions that privileges some and deny others, as Imani Perry, a Princeton University professor, argues in her book More Beautiful and More Terrible: The Embrace and Transcendence of Racial Inequality in the United States.

The privilege afforded to white people is a more insidious problem than the speech acts committed by the SAE frat members, my classmate or the truck driver. It verifies what any person shelling out "nigger" actually believes about himself and the non-white other.

If you felt angry after reading my first story and giggled after reading the second, know that you are not alone. We exist in a racialized and racist society always moving between horror and absurdity, fear and hilarity. And it is tragedy that racism can easily cause some of us to break, while others laugh.

Yet it is ironic that racist words uttered by individuals captivate our attention and distract us from the more pronounced and dehumanizing system of racial inequality that actually gives words, like nigger, power in the first place.