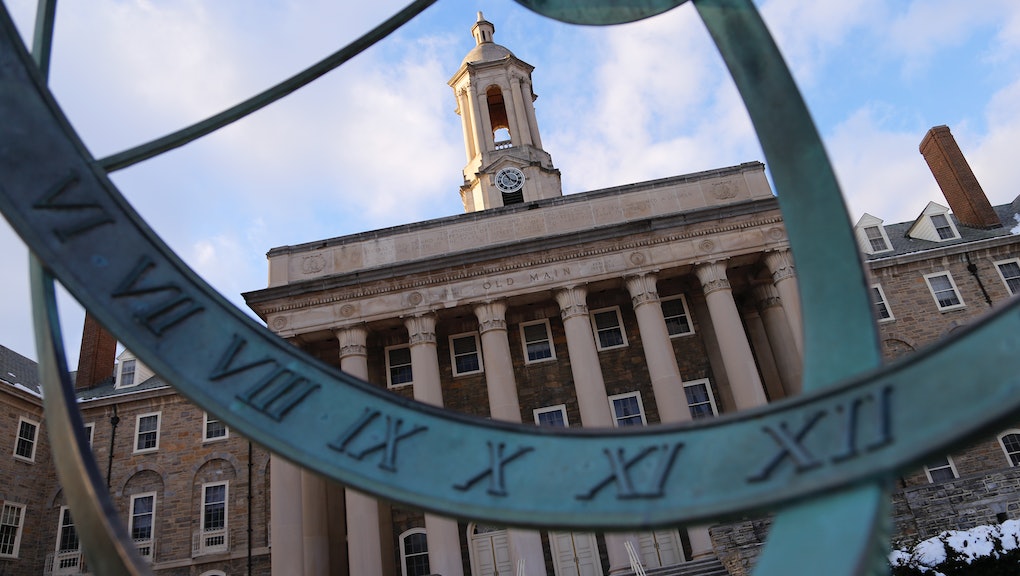 Penn State University has suspended the school's chapter of the Kappa Delta Rho fraternity after a secret Facebook page was uncovered where offensive pictures of women, mostly naked and passed out, had been posted and shared online, reports WJAC-TV.

According to police, members of the fraternity posted the alleged photos on a private, invite-only Facebook group known as "Covert Business Transactions," though it was shut down once a victim discovered it, only to be later reborn under the name "2.0."

While operating under the 2.0 name, police used a search warrant to raid the group's page, in which "members allegedly shared photos of drug sales, hazing and photos of unsuspecting victims — mostly women — partially naked," reports WJAC.

Police told WJAC that the group had almost 150 members, including current students and alumni, and that the Facebook page and computers had been scrubbed of all but 20 incriminating photos officials were able to recover.

In a statement provided to Mic, Damon Sims, Penn State's vice president for student affairs, said police and school administrators were investigating the report and promised that the university would "hold accountable any groups and individuals found responsible."

Fraternities behaving badly: The news out of Penn State is only the latest chapter in what has been a string of controversial incidents involving fraternities around the country.

Earlier this month, the University of Oklahoma chapter of Sigma Alpha Epsilon was shut down after video of their members singing a racist chant appeared online.

At the University of Chicago, a "Conquistadors and Aztec Hoes" Facebook event posted by the Delta Upsilon chapter drew student outrage and forced an apology by the chapter's vice president of public relations.

A Georgia Tech Phi Kappa Tau frat brother's email called "Luring your rapebait" offered a step-by-step guide to sexual assault and advised readers that "IF ANYTHING EVER FAILS, GO GET MORE ALCOHOL."

Wesleyan University's branch of Beta Theta Pi was known as a "rape factory."

An atmosphere of misogyny: While fraternities have in the past attempted to reform themselves internally through dialogue with their members, these efforts haven't done enough to stop the trickle of bad news coming out of American college campuses.

The pervasive misogyny and racism seen at many college fraternities have complemented ominous correlations between fraternities and sexual assault.

According to a 2007 study, men in fraternities were three times as likely to commit rape than other men on campus, while data from the New York State Coalition Against Sexual Assault shows that 25% of women on college campuses are victims of sexual assault at some point during their four years. Additionally, 50% of sexual assault on campus also involved alcohol, making frat parties a particular lightning rod.

Regardless of who's to blame, fraternities in America are out of control. The Facebook scandal at Penn State is the latest reminder that it is time for a change. While it's bad enough that these attacks and assaults are such a prevalent part of college life in America, the fact that certain frat members have taken to posting naked photos on Facebook like trophies of their vile conquests confirms this is a problem that cannot be ignored.