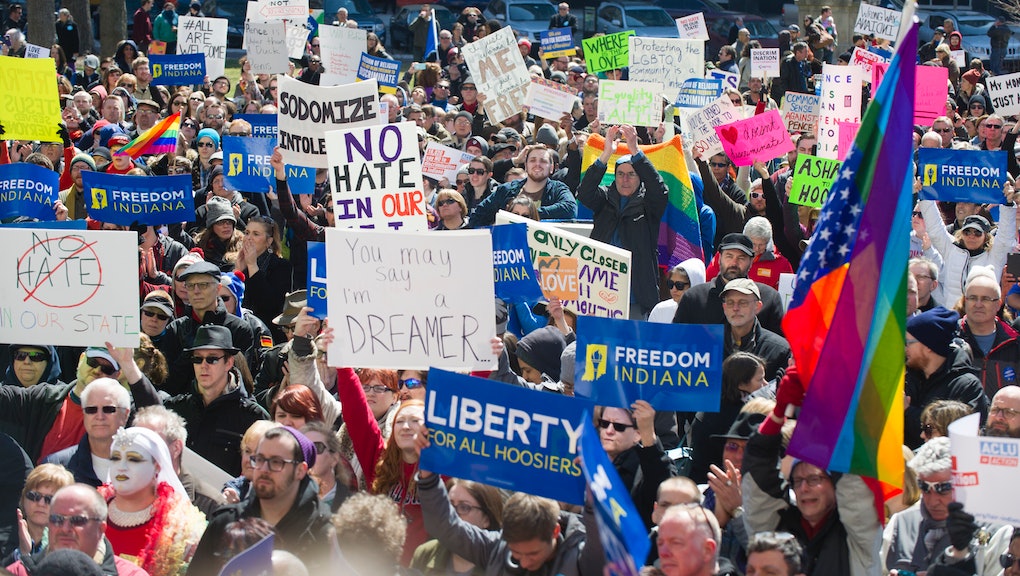 Every cloud really does have one.

In a surprising twist, reefer activists are taking advantage of the state's controversial new Religious Freedom Restoration Act, which allows businesses and individuals in the state to discriminate against members of the LGBT community on religious grounds, to found the First Church of Cannabis Inc.

That's right, Indianapolis lawyer Abdul-Hakim Shabazz wrote for Indy Politics that the state's rush to defend religious liberty may have actually opened the door to more than it bargained for.

"I would argue that under RFRA, as long as you can show that reefer is part of your religious practices, you got a pretty good shot of getting off scot-free," he writes, though he noted it is still illegal to smoke pot in Indiana.

We've seen this before. The Indiana move is part of a time-honored playbook of activists using the logic of controversial laws to advance other (and amusing) ends.

For example, after the Supreme Court ruled in Burwell v. Hobby Lobby Stores Inc. that the Christian craft store chain could deny contraceptives to employees on religious grounds, the Satanic Temple took up the cause of religious freedom. The Satanists announced in 2014 that they would use the logic of the decision to legally challenge "informed consent" laws, where many states require women to receive "informational" literature by the state before undergoing an abortion.

When the group American Atheists lost a legal challenge to have a monument to the 10 Commandments removed from a Florida town, they did the next best thing and erected a monument of their own. The monument, which sits in a designated "free speech zone," quotes Thomas Jefferson and Benjamin Franklin.

The First Church of Cannabis and LGBT rights may seem like two different issues, but they are linked in one important way: Neither causes harm to anybody else. The state of Indiana should not be in the business of regulating benign individual activity.

First Church of Cannabis, can we get an amen?