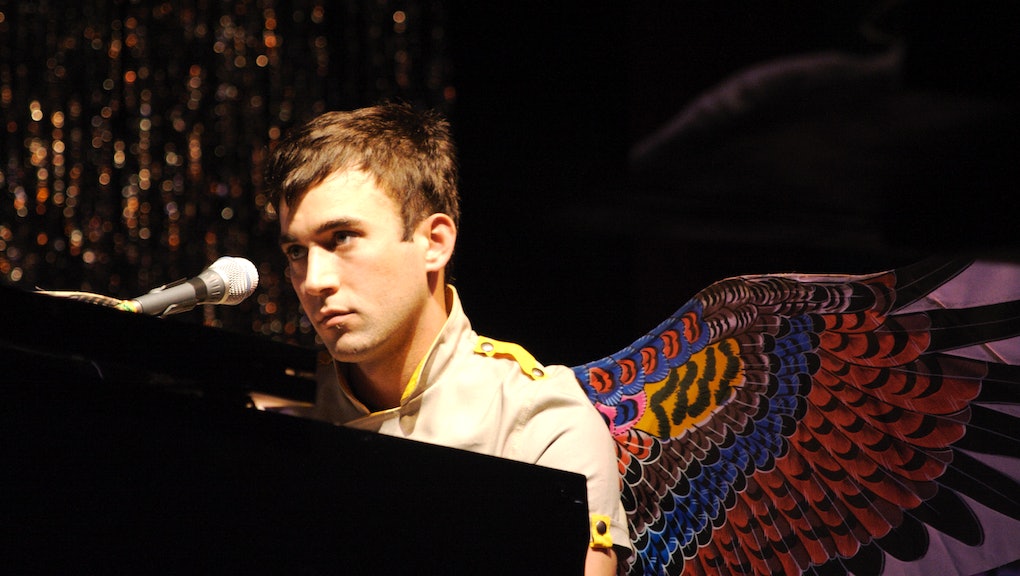 Sufjan Stevens Just Proved He's So Much More Than a Musician

Van Morrison, the Irish soul legend, once called Bob Dylan "the greatest living poet." Now it's regarded almost as fact. When Dylan named his own album Tempest, he only encouraged the comparison between the Minnesota-born songwriter and Shakespeare himself. Literary critic Christopher Ricks wrote a bestseller about Dylan's lyrics, treating him as the great creative artist of the 20th century. But nobody has truly earned that sort of historic acclaim since.

On Tuesday, Sufjan Stevens released Carrie & Lowell. This record is unprecedented, a clear artistic achievement beyond most anything else in recent memory. Stevens is not the type to compare himself with Shakespeare — in his songs, he's more likely to compare himself to a unicorn or a famous serial killer — but if he is not the Shakespeare of our time, he may be its Flannery O'Connor, its William Wordsworth, even its Dante. There are albums and then there are works of art; Carrie & Lowell is firmly in the latter camp. It is on par with the greatest work of Dylan, and the great works of literature. It's time we started considering Stevens in a wholly different light.

Dylan once told an interviewer that "the best way," "the truest way" to write a song was "just talking to somebody that ain't there." Carrie & Lowell is an almost impossibly faithful application of that writing advice: Stevens spends most of the album talking to and about his deceased mother Carrie, who gave up Sufjan and his siblings up when he was 1. She was an elusive figure in his life, struggling with depression and schizophrenia for years before dying of stomach cancer in 2012.

Stevens spends the album in search of his mother, who was absent in body yet present in his mind even while she lived. He invites the listener to share a complete intimacy with him — he sighs into the microphone; we can hear his hotel's air conditioning on iPhone memo tracks — and to seek alongside him a longed-for intimacy with his own absent mother. "This is not my art project," he told Pitchfork. "This is my life."

To make the record, he stayed largely out of the studio. He ventured back to a hotel in Klamath Falls, Oregon, near where he spent rare summers with his mother and step-father. "Lemon yogurt / Remember I pulled at your shirt / I dropped the ashtray on the floor / I just wanted to be near you," he sings on "Eugene," a song about those summers. The feelings of absence that visited him in the wake of her death, he told Pitchfork, led to the "pursuit of meaning, of justice, of reconciliation" that defines Carrie & Lowell.

The success of that pursuit offers good cause to consider Stevens among our greatest literary figures. Wordsworth, one of the most influential English poets after Shakespeare, writes that a poet is a person who has "a disposition to be affected more than other men by absent things as if they were present." It's hard to imagine a poet more affected by absence than Stevens is by Carrie's. It's hard too to imagine a poet more determined to turn that absence into a sense of presence — a positive experience of reconciliation that transcends the gap between mother and son, and between songwriter and listener.

It's a feat he accomplishes on every song. When he sings on the album's title track of the wonder of walking as a child in Oregon with Carrie, "under the pear trees ... fairyland all around us," Stevens' youth becomes present for the listener alongside his or her own, felt as sharply as Wordsworth's description in The Prelude of childhood's "shining streams / Of fairyland ... a spirit hallowing what I saw." He takes on the oldest imperatives of music and poetry, and he executes them flawlessly.

Stevens' fairyland isn't just on the one song; he is a noted creator of his own personal mythology. His art is borne of loneliness, of the need to celebrate and communicate the meaning of his life. Yet his music goes well beyond the confessional earnestness of folk-rockers like Mumford & Sons or even indie darlings like Tobias Jesso Jr. His music has the real weight of the artistic tradition he often cites on his blog and in interviews. Often, that means he looks to religious art.

The Atlantic writes that Stevens' religious music must be considered not contemporary Christian music (which Stevens calls "didactic crap") but "Christian art" in the vein of Bach or Beethoven's masterpieces or, perhaps most fittingly, Tolkien's Lord of the Rings. It's not that the historical pageantry of Stevens' 2005 Illinois and the sonic traumas of 2010's The Age of Adz were not art. But the Sufjan of 2015 is no longer writing songs inspired by history. "That was all publicity. It wasn't really serious," he told Stereogum of his 50 states project. He's crafting timeless songs that take their place gracefully in a long historical tradition of Christian artistry. He once wrote a faithful homage to an O'Connor short story. Now he is an artist of O'Connor's stature himself, in conversation with O'Connor, with Wordsworth, with the ancient Psalmist, as an artist among artists. He's "just talking to somebody that ain't there," much as with Carrie.

Carrie & Lowell is the work of a sometimes-goofy singer-songwriter determined to throw all he has into his art, all his emotions but also all of his intellect, all of his understanding of the rich tradition of artists who came before him. This is, in fact, one of the themes of Carrie & Lowell. He pivots from the intensely personal to the universal. At the record's own pivot, the instantly classic "The Only Thing," he sings, "Faith in reason, I wasted my life playing dumb." Followers of Stevens's bizarre Tumblr (also his official website) may recognize an inspiration from O'Connor's prayer journals: "The love of God is the business of reason, not emotion." When he writes of "blind faith, God's grace," the "only thing" that saves him from the depressive tendencies that are his mother's inheritance, he writes with the same faith in reason, and something of the same artistry, as O'Connor did.

The result of all these presences, personal and artistic, is a sense of real reconciliation. The record is an unflinching confrontation with the bleakest facts of the human experience — separation, depression, death — that redeems these facts of their sense of meaninglessness and so makes life itself, through art, more livable.

Geoffrey Hill, in his long poem "The Triumph of Love," answers the question "What is the poem?" with the phrase "a sad and angry consolation." Poems "are to console us / with their own gift, which is like perfect pitch."

On the title track of The Age of Adz, Stevens promises, "When I live, I'll give it all I've got." The sad and angry consolation of Carrie & Lowell suggests that there are no limits to the gifts he has to offer, and that the artistic journey Stevens describes on Carrie & Lowell's last track as a "search for things to extol," to celebrate, is far from finished. For when he lives, the perfectly pitched singer-songwriter-poet-artist — famous for celebrating Chicago, Detroit and the Brooklyn-Queens Expressway, among other things — promises to offer cause for celebration, for consolation and for simple, stubborn hope.