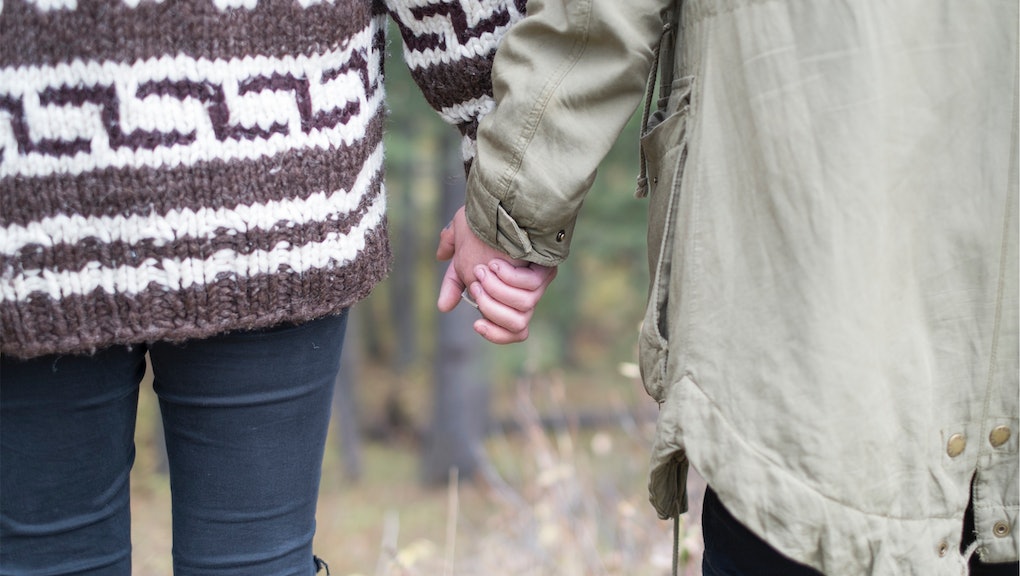 "How do you know they're the One if you haven't been with anyone else?"

"Do you ever wonder what else is out there?"

Staying with a romantic partner you've been with since high school may seem unconventional at best and naive at worst. Either way, it's rare; depending on who's counting, anywhere between 5% and 35% of recently married or committed couples met online, while a good chunk of adults meet at work (one survey put it at 10%), and getting set up through adult friends is still common.

But for couples whose roots go all the way back to their school days, there's something unique to the connection, something deeply rooted that few outsiders can understand.

People who've been with their significant others for so long face stigmas and stereotypes, as well as plenty of skepticism. But there's loads of wisdom these lifelong couples — particularly high school sweethearts — have been keeping under their belts (or fanny packs, or mini backpacks, depending how long the relationship goes back). Here's what five teenage success stories can teach us all about lasting love.

There's nothing better than knowing what makes the other person tick.

Barry, 27, has been dating with his significant other, also 27, since their senior year of high school.

"When we were sophomores in college, we both decided to study abroad in London. Both coming from close-knit families, it was difficult at first for both of us to be so far away from home. Being able to explore a city new to us and travel through Europe together definitely helped create a strong bond in our relationship. A healthy relationship will prove its strength organically.

Being attracted to other people is totally natural.

Samantha has been with her fiancé since her senior year of high school in 2004. They're both now 27.

"Have I considered other men attractive? Sure, who hasn't? There's a difference between imagining scenarios and making them happen. I've never felt the need to be with anyone else because I always think about the relationship that we have. Yeah, that stranger may be good-looking and could quite easily be great in bed. But could there be a conversation afterwards? Would we share any interests? Would he be able to make me laugh the way my guy can? Probably not, and that's because we've got this great connection.

"One girl in college told me it was 'cute' that I thought I knew what I wanted at such a young age. I told her 'mature' was probably a better word, and that I felt lucky to be in the kind of relationship that people dream of being a part of. She had little else to say after that."

You don't need to have tons of partners to have great sex.

"A misconception is that you are subjecting yourself to some kind of sexual oppression. I think people should feel free to be as promiscuous as they want, but to say that there isn't an infinitely exciting world of intimacy possible in a committed relationship would be naive. If you really want each other more than anything else — and you communicate about that and trust each other — than it's totally fine to have monogamous 'thought crimes.'

"[The best part is] I feel like I can take big risks, whether it be in my career or on creative endeavors or whatever. At a certain point, we were forced to replace expectations with mutual trust and support, and that's when I started to truly understand what people mean when they call someone their 'rock.'"

A happy relationship means never being afraid to be yourself.

"The best part of being with someone you've known so long is not being afraid to be yourself, your real self. After so long, there's nothing to hide, no secrets, no self-consciousness, no fear and no worries.

"Learning how to communicate is the key. Many good relationships don't get enough of a chance because people don't know how to communicate with their significant other. So this, and good sex — that's very important. As long as you find ways to express yourself and talk, then your mind and body don't wander from what's in front of you. That's what I mean by good sex — always finding ways to try something new or go out someplace interesting or even the slightest of changes is enough to keep the flame lit."

The longer you're together, the more awesome you make each other.

Alyse has been dating her significant other, now both 27, since they were 15.

"We were in 10th grade at the time and had biology class together, which is where we met (although we were actually in the same preschool class at 2 years old and are sitting next to each other in the class picture).

"The best part is that we were able to grow up together and become adults together. We went through a lot of the 'growing pains' issues that everyone goes through in high school, college and getting settled as an adult — but we went through them together and helped each other along the way. I think we each grew more by incorporating some of the best parts of each other's personalities and interests into our lives.

"The stereotype that I've encountered most often is that being in a relationship for so long and at a young age is limiting and that it hinders each person's ability to grow and experience new things. [But] we've experienced the opposite. Having someone by my side, I felt more willing to try new things and benefitted from having someone to give me that extra push when I was making excuses."